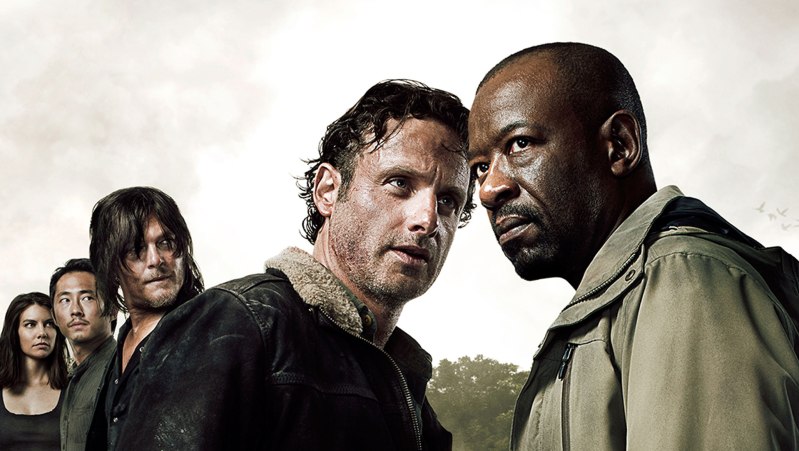 Despite the cop-out ending, The Walking Dead S6 still has moments of genuine class and thrills.

“Do you have any idea who you are talking to?” – Rick Grimes

As mentioned in my Series 5 review, The Walking Dead has passed the point where you should wonder how long the series will go on and whether there is an actual end game.  If you’ve come this far in the journey it’s because you’re constantly intrigued by the events, the surprises and the major talking points.

What we continue to see as set from S5 is that the show is naturally revolving around the idea that humans are far more dangerous than the walkers and S6 is the clearest indication of that change.

There’s two ways of looking at it – it’s not only the threat outside the gates like the wolves or Negan’s saviours for example.  It’s also the naivety inside the gate as Rick tries to unite the Alexandrians to his way of thinking.  Let’s face it, the Alexandrians can count themselves lucky but their inexperience and sheltered life made them blind.  When you compare their actions to a well-drilled unit like Rick’s group, they paid the price and in some circumstances it got them killed.

With this expanding world, escalating threats and new relationships coming to the fold, Rick’s leadership comes under constant pressure.

Rick and Morgan’s relationship is always great to see but in this season we see contrasting beliefs about the world they now live in.

Rick (Andrew Lincoln) has been turning into Shane for a long time.  You could argue that Shane was ahead of the curve with his actions back in S1 and S2 but given the circumstances and Rick’s experience, the more he descends down that path.  Rick lacks patience and is always on edge.  If you want to survive, you can’t have passengers or people against you.  Rick is not there to play nice.  He adopts the ‘kill or be killed’ approach, expressing his authority in any shape or form to get people to understand the threat. It’s the complete opposite for Morgan (Lennie James).  He has been in Rick’s position before and can sympathise with him but realises that Rick is on a dangerous path.  In the episode Here’s Not Here, we see Morgan mentally gone.  He’s lost all sense of hope and operates like a wild, feral animal.  But under the guidance of Eastman, Morgan develops a Zen like code.  Before he use to kill without conscience or morality.  Now he tries to educate others that killing is not the answer – even if it means keeping a wolf captured and endangering others in Alexandria.

Whilst Rick and Morgan will always remain friends, the fact that both characters have gone their separate ways (albeit forcefully due to circumstances) shows how much they believe in their beliefs.  Morgan seeks peace and unfortunately for Rick, violence and retaliation is the only solution or universal language that people seem to understand in the new world.

“You need to know things aren’t as simple as they might seem.” – Jesus

What’s great about S6 is that The Walking Dead has this confidence to introduce something new as a viewing experience.  The first eight episodes deal with the same event around Alexandria from simultaneous perspectives, both the before and the aftermath.  It’s a change-up from the usual narrative of going from moment to moment.  In these episodes we see the cause and effect with one action or decision leading to something else.  We finally find out why the Alexandrians have been isolated for so long, almost totally oblivious and completely naive to what was happening outside their gate.  When their safe hold is attacked, the remaining residents are left to defend themselves.  In the Walking Dead world, nothing lasts forever and the long-term repercussions are felt throughout the remainder of the series.

The best episode of the series belongs to No Way Out.  This is The Walking Dead at its crazy best, full of shocking and scary moments, plenty of walker action and destruction and probably the best example of a rallying community spirit!  No Way Out as an episode also represented a clean slate for the second half of the series, wiping out majority of the Alexandrians and wolves like a bunch of red shirts off Star Trek.  Sorry but not sorry, I was very happy to see them go.

The second half sets up the anticipation and arrival of Negan (Jeffrey Dean Morgan).  The intensity levels increase in moments such as Rick and his group performing a daring assault on Negan’s armoury to Carol and Maggie getting kidnapped by Negan’s followers, the saviours.

What instantly struck me about the second half is Rick’s naivety and at times recklessness.  Negan is no ordinary individual.  The saviours operate like a cult – anything you find belongs to Negan and if you don’t co-operate, there’s a punishment which most likely results in death.  It’s the twisted version of The Circle of Life.

Negan is the real deal and he operates like a militaristic leader with a faithful group of loyal and equipped soldiers.  In the season finale I’ve never seen Rick’s demeanour change so fast.  For someone who has been so tough in his belief and actions, he’s scared and helpless knowing he’s come up against an opponent who doesn’t play games and has a superior advantage.  Welcome to the big leagues…

Now for the cliffhanger itself and I have to agree with the majority, I think they should have shown who got ‘Negan-ed’.  I love the camera angle and the idea that we, the audience got his violent wrath but if we all assume who we think it is based on the comics, for the ending not to address that feels like a cheat.  Yes the hiatus can be used to speculate or maybe the showrunners are changing the rumoured character for someone else.  But whatever the reason The Walking Dead has always been brave enough to show a character dying in the past, even if it was your favourite.  So to see them suddenly change that ethos felt like a backstep and a miscalculation.

That’s the real shame because how Negan was introduced and the mind games as he taunted his barbed wired bat called Lucille was brilliant yet uncomfortable.  The entire episode was filled with psychological tension and Negan’s presence had me on the edge of my seat.

I’m not going to lose any sleep with the cliffhanger but maybe disappointed is the right word to sum up how I felt.

If there was a star performer of the series then it most certainly belonged to Melissa McBride as Carol.  The way her character evolves throughout the series has been intricately done.  She goes from Rambo mode to suddenly developing a conscience, questioning whether the violence and the rising body count makes her a monster and towards the end of the series, she can’t live with that.  Accepting death is far easier than living with the constant torment trying to justify her actions.

The game changer for her as a character belongs in the episode The Same Boat.  Along with Maggie, she’s kidnapped by the saviours and held hostage.  There are great little moments where for you as the audience get to debate Carol’s actions.  Was she putting on an act or was she genuinely scared for what could happened to her?  I think it was a nice combination of both, especially as she realises she has far more in common with the saviours than she thought.  Their back story echoed hers and for the first time in a long time, we see Carol vulnerable.

But the greatest strength of the episode is not only seeing Carol’s changing persona but how both Carol and Maggie came across.  They were survivors, acting on opportunity despite trying to reason with the saviours.  They clearly weren’t damsels in distresses, waiting for Rick’s group to come and save them.  Their actions were brutal because they were left with no choice.  A female centric episode that spoke volumes about their choices on why they fight, you probably could cast both Melissa McBride and Lauren Cohen in the next Mad Max movie!

Despite a few ups and downs, The Walking Dead still manages to entertaining.  Eugene (Josh McDermitt) still provides the laughs and Daryl (Norman Reedus) still has the best kills of the season.  My favourite being taking out the saviours with a rocket launcher!  There’s plenty of walker action (will never forget the walkers in sewers) and the music for the series has brilliant.  Just like the action on-screen, the music has been tense and atmospheric like watching a scene from a John Carpenter film.  Best use was definitely during the assault at Negan’s armoured compound.

Season 7 will be interesting to see where they pick up from and how the group handle Negan (if they can).  Whatever the new series brings, the world is forever changing and nothing will be the same again for the group…

Just as long as Daryl and Michonne don’t die!