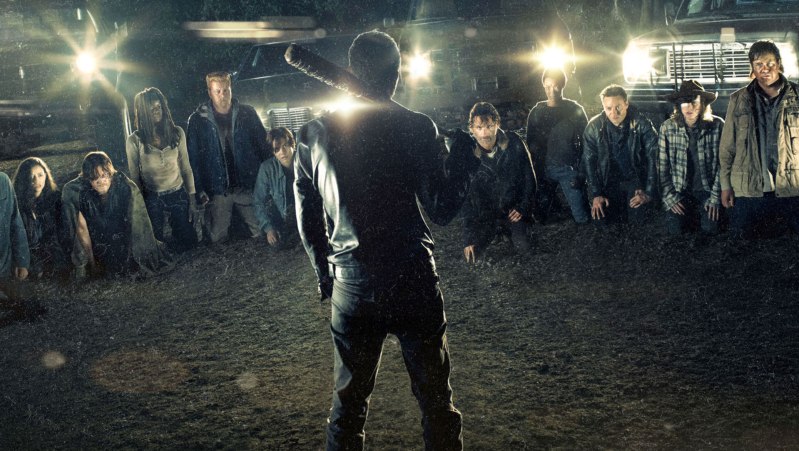 It was bound to happen but The Walking Dead is at a crucial point in its history.

Season 7 of The Walking Dead wasn’t all bad.  As the show has always done, The Walking Dead is filled with your typical human drama, zombie scares and genuine moments of brilliance in depicting a post-apocalyptic world.

However season 7 wasn’t good either – for large parts it was distinctly forgettable.

Truth be told, The Walking Dead S7 never really recovered from its powerful yet fiercely brutal opener.  In many respects it was a brave decision to end the previous season on a cliffhanger knowing how divisive it would be amongst fans.  I certainly was vocal about it in my S6 review, criticising the show for “copping out” on an important and crucial reveal.  But despite the viewer complaints about the severity of Negan’s brutality, the episode The Day Will Come When You Won’t Be certainly signified an expectant and much-needed game change.

But unfortunately it didn’t. 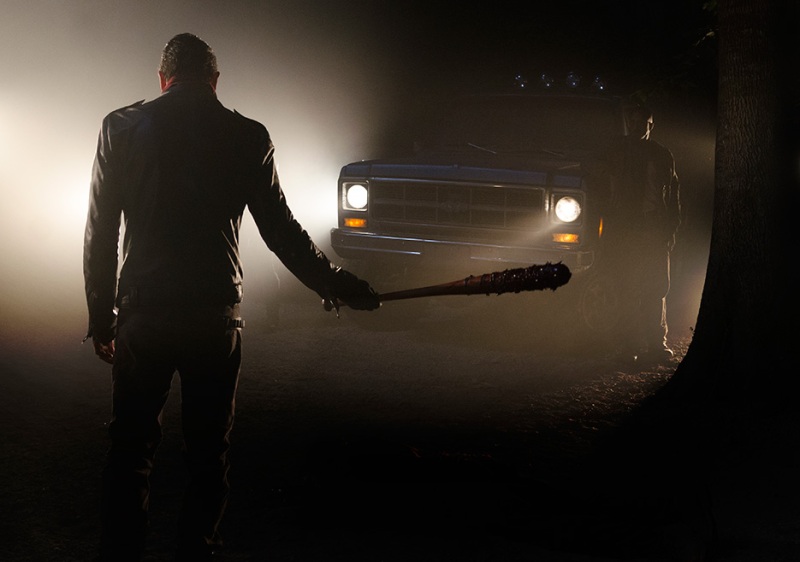 This is nothing new but for a long time The Walking Dead has fallen into a particular and comfortable pattern – eat, sleep, walkers/threat, repeat.  Rick Grimes (Andrew Lincoln) and his group find a place, they try to make it home, a threat comes along, they try to deal with the threat, people die, unleashes a bigger threat and duplicitous characters, more people die and repeat the whole process again for the next season.  The methodology is repeated so often that as a viewer we’ve become softly conditioned. Certain elements can be predictable as the main cast have been together for a long time without much threat (until the S7 season opener).  In previous seasons, The Walking Dead got away with it because the show always kept up its fast pace momentum.  In season 7, the momentum was so slow and badly paced that justifying a 16 episode season is now too much of a stretch.  Season 7 exposed the frailties of the show and it almost begs an internet challenge to re-edit season 7 as a 10 episode collection, just like how a fan re-edited the entirety of Breaking Bad into a two-hour movie.  If the plot still makes a concise sense, then my point is proven.

To give The Walking Dead some credit, each season has been on an experimental journey.  Season 6 for example had multiple perspectives of the same concurring event and season 7 is no different, utilising episodes as character studies.  On one hand there’s a great excuse for this storytelling style.  As a viewer we can expand beyond the group and get to know lesser or new characters, highlighting the importance of their actions on changing the course of the battle.  The downside however is that it deliberately stretched out a storyline well beyond its means.

As a viewer, everyone knew the direction the show was heading and the last thing you want from a TV show is when it starts to become a chore to watch.  Season 7 often found itself repeating the same tonality without much progression.  Negan’s introduction demonstrated his powerful influence with the deliberate and psychological unbalancing of the “Ricktatorship”.  But it often resulted in characters making the same repetitive speeches or conversations highlighting their position or personal stance.  The action overall was limited, only improving in the second half of the season.

At some point you want justification and ultimately season 7 felt like one, giant tease for war, a power struggle between two leaders.  Yes characters (both old and new) were making moves to allow a change to happen but at times the lack of reward or resolution didn’t fulfil a pay-off that the show comfortably did in previous seasons.

“If you keep thinking everyone’s an enemy, then enemies are all you’re gonna find.” – Tara

When The Walking Dead is on form, it’s hard not to argue against it.  The past couple of seasons we’ve seen the continued exploration of humans being more dangerous than the walkers.  Whilst I’m missing the usual walker threat there’s an obvious reason and justification for the change – the group has been together for a long time that handling walkers has become second nature.  They’re like a well-trained unit and their problems have evolved to bigger threats.  But what the show has managed to maintain in this uneven season is that sense of questioning the morality of situations.

Take the introduction of Oceanside, an isolated community which has been devastated by Negan and his army.  They have nothing but each other to protect themselves and everyone is the enemy to them.  The one thing they have in their possession is weapons.  Rick being desperate to get a similar army to Negan’s decides to steal their weapons by force and then asking for their co-operation.  The question is, does that action make Rick any more different from Negan?  Obviously Rick and Negan characteristically are different but resorting to fearful threats and intimidation to get their way still operates as the way of the new world.

On the flip side is Negan “the big bad wolf” that everyone paints him to be?  Well of course he is!  However there’s evidence to suggest that he does have morals or a code to his brutality.  Disobey him and his rules and of course you’re in trouble.  You may get a lecture, a casual back lean or something terrible involving an iron.  But try to rape a woman and he will stab you in the head.  Take note “rapey Davy”…

But given how experimental The Walking Dead S7 was, could we have benefited from a Negan centric episode?  How did he amass such a large legion-esque army?  What was he like before the walkers?  Like The Joker, did he have one bad day that turned him into a sadistic tyrant?  Is he immune from the walker virus?  Was he bitten and then survived?  Fair enough if this character development is being saved for S8 but besides the spotlight of his intimidating threats, we know little about him personally and could be viewed as a missed opportunity.  This is a direct contrast to when the Governor (David Morrissey) was introduced back in S3 as we learned quickly about his circumstances.  Yes he had a conflicting dual personality but his twisted affection for his zombie daughter gave the audience a motivation for his actions even if we don’t necessarily agree with it.

Negan is clearly the devil and has created a hell on Earth.  His violent actions are constantly juxtaposed to The Kingdom and King Ezekiel (Khary Payton) with his God-like and peaceful paradise.  At least in the episode The Well, we got the idea of how Ezekiel obtained his power and why people followed him.  The same can’t really be said about Negan other than the fact he’s built up a steady following of people who want to kill him.

What The Walking Dead S7 has demonstrated so far is how much hope has been removed from the equation and that in itself can be exhausting especially on how drawn out the season has been.

There were some major positives about The Walking Dead S7 and that’s the role of women and the rise of female empowerment.

While the male characters were dehumanized by Negan’s dictatorship and authority, whether that’s having your skull bashed in by Lucille, being physically and mentally tortured, being subservient to Negan’s orders, thinking Negan can be reasoned with or taking drastic action just to prove a point, the female characters rose to the occasion and stood out massively.

Whether you agreed with their actions or not, characters like Maggie (Lauren Cohan), Carol (Melissa McBride), Sasha (Sonequa Martin-Green), Michonne (Danai Gurira), Rosita (Christian Serratos) and Tara (Alanna Masterson) took matter into their own hands, changing the dynamic and their survival perseverance.  Some decisions were born out of a forceful choice like the Oceanside group, choosing to remove themselves away from the dangerous equation.  Others grew into leadership and that was particularly demonstrated by Maggie.  Right from the season opener she knew exactly what was needed to be done.  Despite her limited appearances during the season, with the help of Sasha they led by example, teaching the Hilltop group how to fight and protect themselves.  In some scenes Maggie showed compassion and forgiveness during difficult circumstances, made a point when necessary and every characteristic defiance further exposed the weakness and lack of authoritative control Gregory (Xander Berkeley) possessed.  The fact that her words ends the season is a case point of hope returning to the series but a justified reason why she has to lead that struggle against Negan.

Whilst it’s not enough to save the season overall but it clearly demonstrates the importance of strong female characters, continuing what has been set out in the previous season.  Post-apocalyptic dramas are not just a male thing and that women are survivors as well.  By showcasing the different approaches to the Negan threat is an example of a proactive and resistant strength and not a conformed and accepted weakness.  When it came down to the crucial season finale The First Day of the Rest of Your Life, they all stepped up and significantly contributed, even if it meant a sacrifice to their own lives.

I said that The Walking Dead is at a crucial point and I believe this in my heart as a fan.  Forget the 16 episode split seasons – the best shows on today have packed so much in far less.  Instead of the constant build-up towards a mid-season/season finale (and some may disagree with this), a shorter, sharper and continuously concise season would be for the best.

Of course if S8 blows it out of the water then S7 will feel a little less of a chore and more of a concrete addition to the series.  But Robert Kirkman promising fans of a “kinetic, breakneck pace” will do little to silence the concerns or the frustrations.  When you’ve got so much TV content around delivering A game performances and storytelling, then of course The Walking Dead will look a little stagnated against that competition.  It’s not to say the show is crap.  The Walking Dead is an event series that has no fear of cancellation but the dip in quality shows.

Fans want a real game changer.  Deliver us one.