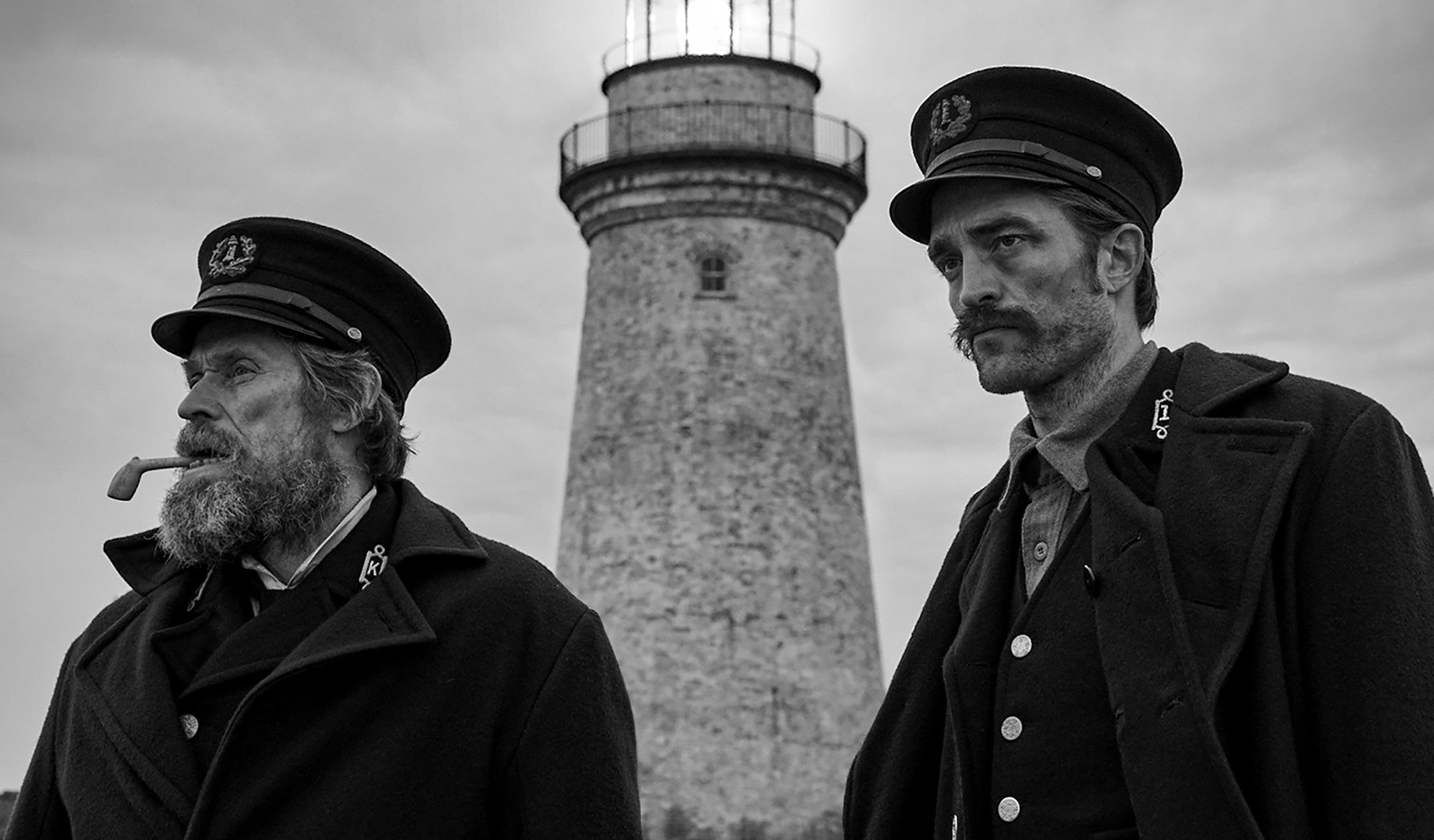 The Lighthouse is a crazy, captivating descent into hell - and I loved every second of it!

If you ever had a desire to be a lighthouse keeper, I guarantee you, Robert Eggers’ The Lighthouse will make you re-think that profession!

After bewitching us in The Witch, Eggers’s sophomore outing is a crazy, weird adventure with the strongest iconography towards silent horror, the surrealism of David Lynch (reminiscent of Twin Peaks), the centred framing of a Wes Anderson film, and the emotional mood board of Battleship Potemkin.  It’s deliberately claustrophobic with its Academy ratio (1:91:1), its intense, black and white richness of Jarin Blaschke’s cinematography and its intimidating sound design and score by Mark Kovren that’s perfectly in-sync with the action on-screen.  Just from the opening alone where you can marvel at its technical brilliance, you already feel the atmospheric dread.

Robert Eggers has this incredible forte for world-building and character development within enclosed spaces and trapped confinements, be it mentally, physically or spiritually.  While The Witch and The Lighthouse are strong definitions of authentic period pieces with careful attention to detail for local dialects and costume designs, you cannot mistake its psychological intention or its exploration.  Lulling you into a false sense of security, Eggers’ unique design purposely takes its audiences out of their comfort zones into an unnerving, mythic tale where wits and (in)sanity are the only tools required.

And The Lighthouse pushes that concept to the limit, focusing on two lighthouse keepers in Thomas Wake (Willem Dafoe) and Ephraim Winslow (Robert Pattinson) as they arrive on a desolate island in New England on a four-week upkeep of managing a lighthouse.  Immediately on queue, as if Eggers had directed his interpretation of The Odd Couple (1968) but set in the 1890s, he translates the claustrophobia into a lack of privacy to highlight their differences.  Pattinson’s Winslow is quiet, reserved and solemn – a man of few words, whereas Dafoe’s Wake (the senior out of the two) is more forthcoming, switching between biblical sea curses and authoritarian criticisms towards his young steward to a drunken fool who unapologetically farts and is openly disgusting at every opportunity.

But chalking this up as a simple horror film would be misleading.  The Lighthouse is not scary, nor is it an excuse for cheap thrills, jump scares or slasher deaths despite what the trailers suggest.  True to A24’s form, their endeavour and indulgence in arthouse human stories cement them as a genuine alternative to mainstream populism of branded IPs and franchises, and The Lighthouse fits that ethos.  But it’s occasional dive into a rampant, situational comedy may put unexpectant audiences off, especially after the high expectations from Eggers debut.  But Eggers always finds himself one step ahead with his brazen confidence that I believe is intentional, building microscopic frustrations (including some well-timed seagulls showing how much of a stubborn bastard they are) that slowly draw you into the psychotic, visionary hell before eventually culminating in an explosively violent and grim third act. 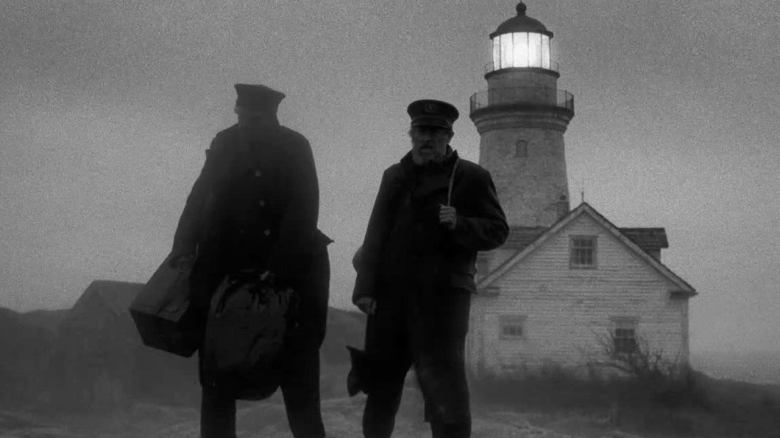 The downturn between Winslow and Wake is intentionally ambiguous, both becoming unreliable narrators as the world around them unravels.  There’s a thematic playfulness in Eggers’ direction; are mermaids real? Is there something unearthly in the lighthouse? Are the keepers stuck in purgatory?  Is it just a simple case of cabin fever isolation? Is it punishment for failing to adhere to old folk tales and curses about dead sailors? A fight to be the dominant alpha-male? Or is everything just a hallucinatory figment of our imagination (or theirs to be precise)?  The heavy consumption of alcohol doesn’t help or the approaching storm that subsequently traps them on the island, but the fact that it’s never directly answered puts The Lighthouse in a unique position where it can be re-analysed, and its interpretation will be different every time.

But the film’s commentary on masculinity is its defining heartbeat, a tumultuous, polarising tonal shift that flirts between homoerotic flirtations, camaraderie and aggressive reactions fuelled by sexuality (or a lack thereof).

That feeling is amplified thanks to Louise Ford and her editing on the film.  Always in a state of discombobulation, there’s no sense of time or perspective.  For the audience, the runtime is a captivating breeze. But the keepers, with their emotive state switching constantly, time seems to warp around them which only adds to the on-screen paranoia, suspicion and outrage.

And if you ever need proof that Robert Pattinson is more than just ‘the Twilight guy’ and can handle the pressures of being The Caped Crusader, then look no further.  It’s a testament to him as an actor for how far he has come, and just like his cameo appearance in Netflix’s The King, Pattinson has a brilliant time in testing out his acting capabilities, taking it to the extreme.  For every nuance, every drunken episode, every repetitive and gruelling manual labour job amongst the oncoming storm, every German expressionist facial expression to convey horror, and every unapologetic feeling of madness and paranoia that this film imagines, he matches Dafoe with the same, ferocious intensity.

Dafoe is equally excellent and hypnotic as a superstitious counterbalance to the cynical Winslow.  Between the epic monologues and his emotional sensitivity (particularly with his cooking or celebrating a drink with a toast), Dafoe almost steals the show, purely because of how well-suited he is for the part.

The dynamic works so well, and truth be told, it had to, especially when the entire film revolves around them.  Only actress Valeriia Karaman is the only source of enchantment. But because at its core is a humanistic horror rather than some supernatural creature means that Eggers’ narrative is a case example of human behaviour with all of their frailties.  He’s not concerned about building empathetic bridges between Wake and Winslow; they’re tortured souls who are as bad as each other, harbouring secrets that only intense isolation would force them to reveal. Their escalation is a tit-for-tat downfall, but at least Eggers is more than honest on what this film is about.  It might be a slight, directional detour, but there is enough credibility, history (loosely based on the 1801 Smalls Lighthouse tragedy) and cinematic homages to go along with the ride. Most of the time, you’re simply in awe.

Once you’ve quickly accepted a lot of its elements, the more The Lighthouse rewards you.  Just like the two leads, you’re swept up into their madness, experiencing the same, disturbing fears as they do on-screen.  And even when it descends into hell, you may not feel the full extent of its fear, but it is completely undeniable to not be captivated by it.  Just for that alone is worth the high praise, and I can’t wait to see what Robert Eggers comes up with next.

Oh, and before I forget – if the seagull doesn’t get a Best Supporting Actor nomination at the Oscars, I will riot.