What’s your favourite audience reaction at a cinema?  Mine has to be watching Jordan Peele’s Us at the Odeon Luxe Haymarket earlier this year.  At a crucial moment in the film when The Tethered arrives on the Wilson family doorstep, Jason (Evan Alex) appears with the immortal words, “there’s a family in our driveway.”  To the amusement of everyone in the screening, a guy sitting at the back decided to channel his inner-Clay Davis from The Wire and yelled out “Awwww Shiiiiiitttttt”.

No such luck can be afforded to Babak Anvari’s sophomore follow-up.  Wounds elicited a wholly different cinema reaction when it was screened to press during London Film Festival – but all for the wrong reasons.

Let me break this down for you – imagine watching an Ari Aster film.  It doesn’t matter whether it’s Hereditary or Midsommar, but for example sakes, let’s go with Hereditary.  Imagine seeing that film where two-thirds of its narrative didn’t make sense.  It had ditched its grounded, contemporary subtext of grief and family trauma that’s coated with bewitching influences, ditched the superb dramatic performances that were laced with foreboding terror, and somehow ditched an awesome cast to fend for themselves without the material or the nuance to feed off from.  Once you have that in your mindset, then imagine going through that journey only for it to end abruptly on a climatic, cut-to-black finish that didn’t even warrant it. That, ladies and gentlemen, sums up how atrocious Wounds is.

I can see why film critic Mark Kermode rates Babak Anvari’s first feature film Under the Shadow so highly, eulogising it to a confident proclaim as his favourite film of 2016.  It’s a taut psychological film that basks in contemporary horror motifs that makes genuine attempts to be fresh and inventive with its cultural background and environment of a post-revolutionary war between Iraq and Iran.  It has a relatable female protagonist, stuck between the proverbial boundaries of progression and the past yet finds herself besieged by a dark, malevolent force threatening her and her daughter’s life. It’s extremely claustrophobic, with everything confined to an apartment block in 80s Tehran.  But its biggest asset is its dedicated respect towards genre-defining films like The Babadook, The Exorcist and J-horror classics such as Dark Water, acknowledging the film’s mysterious presence while strongly adhering to a mother/daughter relationship that serves as amplification for heightened, isolationist fears.  Just like the modern horror auteurs, their films are dripping in subtext, which suggests they are much more than just random jump scares.

That’s why it’s truly baffling once you’ve put Wounds into context.  Wounds may be an adaptation of Nathan Ballingrud’s horror novella The Visible Filth, but it is not even close to replicating the achievements Under the Shadow accomplishes.  There’s nothing wrong with directors taking stylistic detours between films.  Just look at Robert Eggers’ The Witch and The Lighthouse as an example.  But for comparison sakes, this is the ‘chalk and cheese’ of directorial transitions.

It’s obvious that Babak Anvari is a talented director (hence why it is frustrating and disappointing to see the level of absurd quality emitted from his second feature film).  The notable directorial traits are there; its contextual opening title card that sets the scene (or in the case of Wounds – a reference to Joseph Conrad’s The Heart of Darkness), the unnerving music, the tension-building jump scares and its J-horror tribute (this time around it’s The Ring).  But unlike Under the Shadow where its depicted assuredness and subtlety is found in every frame, Wounds is a confusing misfire that’s never sure what it wanted to accomplish in the first place.

The story revolves around Will (Armie Hammer), a carefree slacker, college dropout of a bartender working in a New Orleans bar.  Right off the bat, it’s the type of role Armie can play effortlessly while drinking copious amounts of alcohol – charming, flirtatious with a smarmy outlook all wrapped up in a bow.  One night on shift (after letting underage teenagers into the bar), a gruesome bar brawl breaks out and the scared teenagers abandon their phone.

And pretty much, that’s where the trouble begins.  Taking the phone home Will where his girlfriend Carrie (Dakota Johnson) lives, he tries to get the phone back to its rightful owner.  But a series of haunting and disturbing messages suck the couple into the game where they’ve been chosen as its next players. 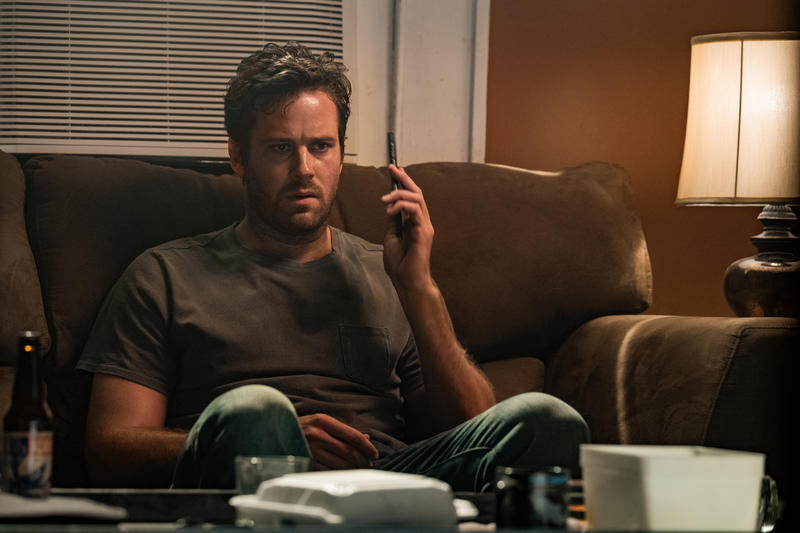 There’s a kitchen sink mentality Babak Anvari deploys, mixing Pagan ritualism (that may or may not have started this entire adventure), The Ring (which I mentioned before in which Carrie succumbs to), teenage terror (in which the teenagers from the bar start stalking Will around in a black car) and an uncomfortable abundance of cockroaches to dial up the creepiness (are they meant to signify death? Ancient mysticism? Spread of the curse? Who knows?).  The problem is that none of these features actually goes anywhere or are fully fleshed out. Nothing is connected or respectfully earned in its mood board of scenes. Unforgivably, the film doesn’t trust itself with its audience, lazily spoon-feeding cliches, jump scares and ham-fisted tropes that even when it sacrifices its points of interest, on a pure, entertainment level it gains nothing.

When a film is actively competing with The Room to instigate the worst dialogue possible, you know you’re asking for trouble. But here’s the thing; The Room actively accepts its quote-a-thon silliness.  Wounds doesn’t, looking at its audience dead-eye in the face to convey its utmost seriousness.  But like an unintentional joke, the dialogue becomes a parody with Dakota Johnson reaching peak prominence on human observation on how the insides of our bodies are “just full of worms”.  As good of an actress she is (ditching that Fifty Shades of Grey malarkey) along with the rest of its recognisable cast, they’re one-dimensionally and unsympathetically hung out to dry, provided with zero effort to care about their exploits.

And as it slowly falls apart, Wounds begins to remind you of Hollywood remakes of foreign horror films – films which amp up the production levels and attach big-name stars to the project but comes across as a pale imitation.  You’ve seen better – e.g. Takashi Miike’s One Missed Call (Chakushin ari) is a suggestion.

If there’s any meritable subtext, then it’s wafer-thin, lost between the mental calls of ‘why didn’t you hand the phone over to the police when you had the chance’ to busting out my ‘what white nonsense is this?’ quote from Unbreakable Kimmy Schmidt.

There are interpretive allegories about the controlling, obsessing and addictive power that mobile phones have over us.  There’s an argument about societal complicity; instead of doing something to ease the trouble (e.g. calling the police), we disassociate ourselves by filming incidents on our phone (as in the case with the teenagers in the bar).  There’s a psychological narrative where it suggests Armie’s character is an ‘unreliable narrator’, walking around in a dream-like awakening that has replaced sanity with delusional paranoia. Or there’s ‘entitled white male rage’ that’s toxic and aggressive because of the magnifying impact it has on Will’s life – unhappiness in his relationship with Carrie, jealousy because he thinks Carrie is having an affair with her professor and uses that ammunition to pursue an affair with his best friend (played by the severely underused Zazie Beetz).  Honestly, you could search for answers within this film, but you won’t find it – the plot is the equivalent of a Where’s Wally joke.

And instead of a euphoric ending that would have left a horrifying chill down your spine, it’s a ‘penny-drop’ audience reaction of bewilderment and bemusement knowing all that effort was for nothing.

There’s no shirking away from this notion – Wounds is one-hour and thirty-five minutes of your life you will never get back.  I hope Babak Anvari can bounce back after this, because he abandons the skilful tact from his first feature, to direct something entirely generic. Maybe that was the point. Who knows. But in the meantime, this wound will take its time to heal.

WOUNDS screened as part of the BFI’s London Film Festival 2019. Out now on Netflix.