If Beale Street Could Talk proves anything, director Barry Jenkins is no one hit wonder.

Forget the controversy that dogged Moonlight‘s deserved win at the Oscars.  If anything, Moonlight was a signal of expectation on what Jenkins has to offer as a director and thank God for that, representing a bold new wave of exciting black talent that is taking Hollywood by storm.  This is a director who believes unequivocally in the power of film, infusing multi-layered tones, themes and concepts using arthouse conventions. It results in films which are visually enigmatic and emotionally endearing.  It may have been a challenge to bring James Baldwin’s book to life, but after the emotional reaction I had with If Beale Street Could Talk, I can’t imagine anyone else giving his work the heart and love it deserves.  Jenkins stunningly delivers in every respect.

It’s unfair to compare Moonlight with If Beale Street Could Talk.  Both are excellent pieces of work defined by their poignant weight and message.  But they do share a lot of commonalities with its directorial choices that articulate and reinforce its intimate portrayal. Jenkins relies on dynamic close-ups of its characters – they empathetically share their world with us with all of their humanity that defines their emotions.  Once again, music and Nicholas Britell’s fantastic blues/jazz symphonic score becomes an insightful and communicative gateway where it speaks louder than words.

But the power that If Beale Street Could Talk captures is Jenkins ability to translate Baldwin’s vocalised themes.  This is not a surface level depiction, painting a broad brush over the social-political issues raised.  In fact, it’s the perfect analytical representation of the in-depth failure of the ‘American Dream’ – a broken ideal within society where people in power refuse to share it and others who are left struggling and divided along the lines of race, discrimination, social class, poverty, economics and the slave mentality within mass incarceration.  It’s the illustration of the struggle where escaping is met with obstacles and barriers, formulating into a powerful statement of a systemic institution of a never-ending cycle doomed to repeat itself.

Without being forced or contrived, Jenkins dynamically weaves those issues as a foundational backbone to the overall story that shapes If Beale Street Could Talk.  This is the story of black consciousness, love and family, explored with clarity, depth and complexity that’s not often depicted on the big screen.  It channels that narrative through the eyes of Tish Rivers (KiKi Layne) and Alonzo ‘Fonny’ Hunt (Stephan James).

It vibrantly celebrates black beauty, idolised through the strength and chemistry that Kiki Layne and Stephan James gracefully share.  With a magnetic performance that radiates throughout, they hold every single frame with a dedicated and fierce devotion that holds unto love with every chance it has.  In Kiki’s outstanding performance, it’s the struggling combination of pregnancy, fighting the legal system and the social vulnerabilities of being a black woman within the patriarchy of authoritative or entitled men who repeatedly take advantage.  Through the difficulties, it is the enduring resilience of sticking by the love of her life.  With Stephan, it’s the psychological portrait of a robbed innocence, falsified and locked up for a crime he didn’t commit and most notably, documenting the essence of a robbed youth, reinforcing the harsh reality that young, black men face within the criminal system. 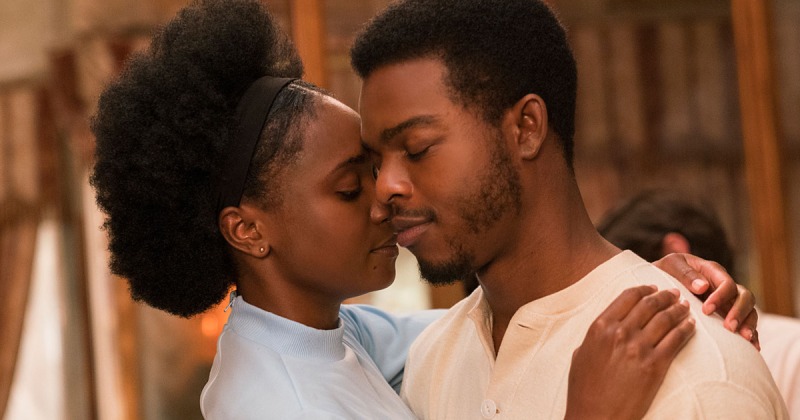 Black beauty also becomes a proud statement in a short but brief scene involving Tish’s sister Ernestine Rivers (Teyonah Parris).  Telling her Tish to ‘unbow her head’ is a sign of self-esteem and confidence, dispelling any negative fears that would normally play into an individual’s psyche.  It relays into the positive depiction of a black family, echoed into power by Regina King as Sharon Rivers who is long overdue for some Academy accreditation.  Through unity and community amongst difficulty of their reality, it’s the juxtaposing resemblance of love and support in comparison to Fonny’s family, looking down at their opposites with bitterness and a God-fearing resentment.

But notably, If Beale Street Could Talk examines black men, not viewing them with a stereotypical lens of criminality, abuse or thuggish behaviours that would dominate other film narratives.  They’re represented as complex individuals with understandable human reasons that have become the face and fate of the struggle.  It’s Joseph Rivers (Colman Domingo) and Frank Hunt (Michael Beach) stepping up as ‘men’ so that their children don’t repeat troubling circumstances that have plighted their reality. Jenkins displays this opportunity as a cathartic response, dispelling associated myths and challenging the perception of manhood once again that Moonlight accomplishes in its search of identity within its ‘coming of age’ conventions.

Powered and complimented by Baldwin’s words, Jenkins provides the alternative to those frequent, outsider conversations.  He paints a distinguished, ‘behind the scenes’ picture which is often ignored or never highlighted or focused.  Behind every injustice, there is a family suffering the consequential aftermath, picking up the pieces and surviving by any means necessary.  If it means flying halfway across the world to speak to witnesses, recounting police harassment or hustling to make money to pay off legal fees is just another example of the empathetic struggle to live.  Delivering a masterclass in editing (Joi McMillon and Nat Sanders) and a ‘to die for’ cinematography (James Laxton), it relies on that notion to guide those symbolic connections and its uncertain future.  This is a human struggle which we can all relate to.

If Beale Street Could Talk leaves us with a resounding poetic message of profound beauty, love and enduring unity amongst social injustice.  But the lasting impression that Barry Jenkins artfully conveys is the power of James Baldwin’s words and their relevant and conscious importance that still resonates today, now more than ever.  Magnificent in its eloquence and full of heartfelt S-O-U-L, Jenkins’ film powerfully haunts you as well as lingers, readily becoming one of the best films of the year and worthy of my highest recommendation.

Barry Jenkins is here to stay – that is the extent of the excitement and visionary flair he brings with each production.  If Beale Street Could Talk is a testament of his endeavours which will serve him well during the awards season.

IF BEALE STREET COULD TALK screened as part of the BFI’s London Film Festival 2018 and will be released in cinemas on 8th February 2019.