Blade Runner or Do Androids Dream of Electric Sheep? as it’s commonly known wasn’t a commercial hit when it was first released in 1982.  With its well-documented production troubles and various edits of the film, Blade Runner could have been a forgotten relic of cinema.  But like a manifesting dream about unicorns, Blade Runner found a cult-like success over the years, transitioning towards the elevated heights as one of the greatest sci-fi films ever made.  It is a cinematic masterpiece.

The open-minded works of Philip K. Dick are not for everyone.  That is not meant to be a discouragement or to put you off Blade Runner 2049.  He was a deep philosophical dreamer that asked questions on the reality of our world.  His stories involved the human consciousness, explored and paralleled against corporations, authoritarian governments and alternate universes.  They are so “out there” in its surreal and niche context that watching any of his adaptations can be a mind-bending experience, something that the Channel 4 / Sony co-production of Electric Dreams is currently embracing.  Ridley Scott’s Blade Runner over time has epitomised that philosophy as a gold standard of his work.

So, it’s natural to feel apprehension at the news of a sequel to a beloved and near-perfect sci-fi film.  The confidence was restored when Denis Villeneuve (Sicario, Arrival) was announced to direct the film.  But having said that, it comes with a weighted and insurmountable pressure.

However, Blade Runner 2049 more than lives up to expectations. It embraces all the themes from the original with a fan service respect but has enough confidence to tell its own unique story with its deepened mystery and self-evaluating context.

“The world is built on a wall that separates kind. Tell either side there’s no wall, you bought a war.” – Lt. Joshi

Running at two hours and forty-four minutes, Blade Runner 2049 can feel a bit excessive and overindulgent.  It’s almost too much of a good thing as if you’re watching the theatrical, director’s and final cut in a giant, stretched out and slow-paced setting.  In a personal and ideal scenario, the film could have done with some trimming and still amount to the same conclusion.

But to put it in the perspective of the director, Denis Villeneuve doesn’t see time as an obstacle.  The only expectation this film requires is patience.  Like most thought-provoking and alluring films, Blade Runner 2049 asks its audience to meet him halfway as you intelligently experience the devastating erosion of a society on the brink of change.  This is not a standardised Hollywood blockbuster film with a simple A to B narrative in search of instant satisfaction or spoon-fed answers (which might explain its disappointing yet understandable US box office takings).  Blade Runner 2049 has so many in-depth and thematic layers about the nature of humanity, its soul and the existential crisis of the mind, the whole experience can be beautifully overwhelming.

Just like Christopher Nolan and Dunkirk, Blade Runner 2049 represents the most immersive and extensive world building depicted on an IMAX screen.  Just like how the original captured our mesmerised imagination, that tradition is richly continued thanks to the outstanding and STUNNING work of Roger Deakins as cinematographer (seriously give this man his Oscar).  Deakins widens the cinematic scope and canvas, raising the bar for visual storytelling.  Every shot on-screen is characteristically hypnotic conveying its own artistic emotion and language (as every world building should) as well as drawing you into the story.  It’s a dystopian world that is both beautiful yet tragic.  Haunting yet desolate.  Isolated yet intimidating thanks to Hans Zimmer and Benjamin Wallfisch’s soundtrack.  They pay a collaborative homage to Vangelis yet forge their own intense mood and path.

In 2049, the cyberpunk generated world is still on its crumbling knees, edging ever closer towards the bleakest of futures.  Even the talk of going “off-world” sounds like a brief respite for a culturally accumulated society that’s hanging by the smallest of threads.

Within this world there is a sense of familiarity as well as the new.  The Tyrell Corporation has been taken over by the Wallace Corporation, spearheaded by Niander Wallace (Jared Leto).  The old Nexus models have been replaced with an updated version with a trait that Roy Batty was desperately seeking – longer life.  Even the technology has an interwoven complex, tailored designed to meet our every need yet can be artificial and impersonal when seeking an actual connection.

The societal integration of replicants and humans sets in motion the context that Blade Runner 2049 ultimately explores.  This is a dying world that has lost its progressive soul with a corporation commercially profiteering as angelic, zen-like saviours.  Blade Runner 2049 asks whether there is any hope left and what shape it will take. 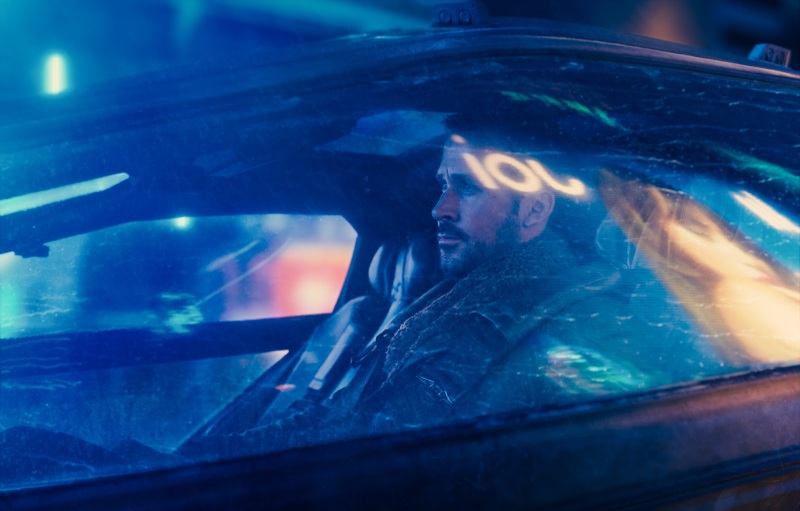 K: “Things were simpler then.”

Like its predecessor and almost taking a page out of Westworld the TV show, Blade Runner 2049 runs with the “more human than human” concept.  It is a reverse Voight-Kampff test that preserves the status quo, switching the protagonist from Deckard (Harrison Ford) to Officer K (Ryan Gosling) who takes on the Blade Runner mantle.

Without divulging too much of the plot but like all of Philip K. Dick’s stories, it’s a journey of self-discovery that shakes the foundations of a character’s normality.  K investigates and takes centre stage in that evolving mystery.  With its layered contextualization, Blade Runner 2049 cleverly plays around with the expectant hero complex we’re familiar with and the dividing lines between replicants and humans.  Gosling expresses a quiet melancholy that’s reminiscent of his performance in Drive and it has beneficial qualities.  Unlike Ghost in the Shell (2017) where Johansson’s Major was begging for a deeper exploration and substance in a mishandled and misguided generic spectacle, Gosling has enough personality to identify all of the enveloping emotions usually associated with a Philip K. Dick story.  It’s a mixture of a struggling internalisation, memory and an artful loneliness as K transforms within each revelation.

While the brilliant Harrison Ford is present and Deckard and K share a parallel symmetry of soulful memories and lost desires, this is very much Gosling’s film alongside Ana de Armas’ Joi, an AI character who is a cross between Siri and Samantha from Her.  In fact, all the characters go through an arc which might not feel definitive but subtly conveys a deeper logic and understanding of their motivations.

Despite the lengthy runtime, Denis Villeneuve has delivered another outstanding and consistent film in his growing directorial CV.  He skilfully applies the wisdom of Philip K. Dick.  Alongside Ridley Scott and writers Hampton Fancher and Michael Green, they’ve expanded the Blade Runner mythology yet leave some mysteries open for our own discovery and interpretation.

Blade Runner 2049 is so visually poetic yet intelligently profound that it leaves a haunting linger if you’ve engaged with its concept enough.

The remarkable thing about the science fiction genre is how expressive it can be across the spectrum.  It can be fun and full of escapism or thought-provoking and daring.  Blade Runner 2049 represents the latter.  It’s a future which may feel distant but has a foundation that can be easily inferred in our world.

While it may alienate most cinema goers, Blade Runner 2049 has the potential to inspire a whole new set of fans for discussion and analytical breakdowns.  Time was an evolving factor in establishing the original as a sci-fi classic and time will be a judgemental factor again.

This is one of the best films of 2017 which deserves to be seen on the biggest screen possible.