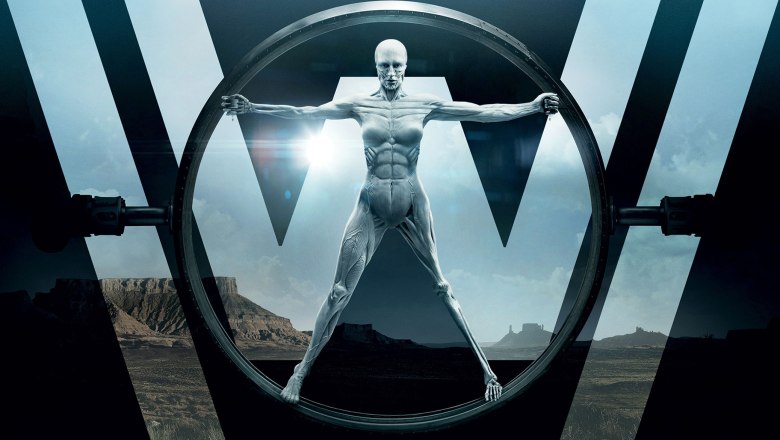 The sci-fi genre has gone through a recent and extraordinary renaissance and Westworld certainly finds itself in good company.  Whilst the series is a re-imagining and inspired by the 1973 cult classic film, Westworld the TV series certainly stamps its own authority with beautiful and intelligent concepts not too dissimilar from our own existence and reality.

Right from the outset, Westworld makes a very clever decision which goes above and beyond from what the original film entailed.  Westworld is essentially a theme park gone wrong.  It’s the classic Michael Crichton concept that was used again for his other creation Jurassic Park.  But instead of the focal point being the humans going through a self-discovery of wonder and eventual fear and terror, the new version puts the robots into the spotlight.  Just like opening Pandora’s box, what started out as something innocent can have severe and long-lasting consequences.

Westworld heavily aligns itself with films and TV shows such as Blade Runner, Ex Machina, I, Robot, Battlestar Galactica and Humans as it constantly delves into the exploration of artificial intelligence and its natural evolution.  However Westworld pushes the boundaries and takes a natural step further.  Whether you’re a casual gamer (like myself) or you are a gaming pro, Westworld’s ability to fused an in-game design and logic is incredible.  Whether it’s the missions or the bespoke interpretation of Asimov’s three laws of robotics where the guests are immortal and cannot die, there is an order to the world.  With its sweeping grandeur shots of the Old West, Westworld adopts an open world lifestyle that would make Grand Theft Auto V proud.  Like an homage to a time period in Hollywood history, certain elements of the show romanticises the Old West that wouldn’t feel out-of-place if John Ford directed it or if John Wayne starred in it.  It even goes as far as character names with Ford (Robert Ford) and Wyatt (Wyatt Earp) being the obvious inclusions.  Everything about the park is meticulous, right down to the finest details.  The robots are beautifully engineered, sculptured and designed, combining the aesthetics of classical art like Da Vinci’s Vitruvian Man with the technological, mass-produced and 3D printing factory line. 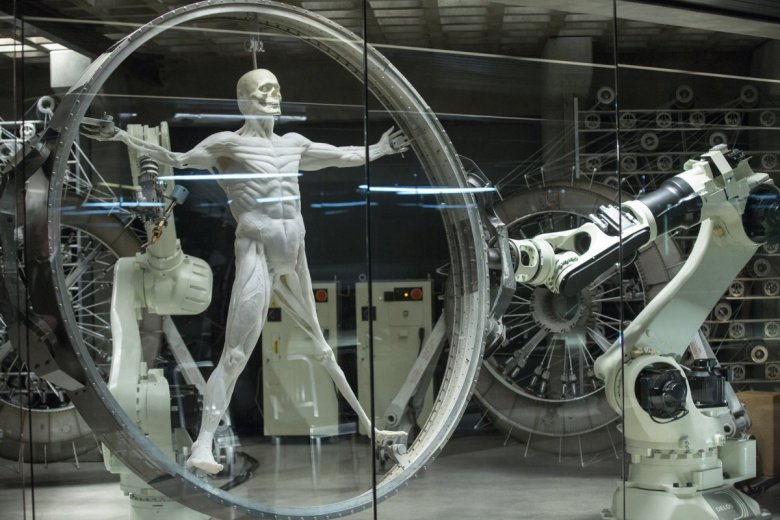 The show takes a number of opportunities to emphasize the large-scale nature of this world.  It’s so huge, it might as well be its own country because of the vast and ergonomic levels of efficiency that’s in operation.  God only knows how much it would actually cost to visit and there must be a hell of a lot of cleaners in that place!  The show feels timeless, not only because of the spot on relevancy it has on our modern society but time itself serves as an important aspect in understanding the series as a whole.  It’s the combination and balance of the Old West juxtaposing with a futuristic and computerised setting.

Westworld is like a beautiful and seductive dream.  The overall concept provides a natural curiosity and temptation about the possibility.  By using a simple gaming analogy, it removes the control pad from your hands and immerses you into the narratives.  The only limitation is the power of your imagination.  You can be the hero or the villain because you can be or do whatever you want.  The choice is yours.

However, just like a good cautionary tale with all its modern influences and contemporary music, Westworld never forgets its 70s roots.  It re-enforces the notion of a dark, dystopian future.

“You can’t play God without being acquainted with the devil.” – Robert Ford

If there’s one thing Westworld gets right is questioning the ethical manner of the park and it accomplishes it in two perspectives.

The first one is very obvious and that’s the human element.  What does Westworld say about our humanity?

Westworld may promote itself as a limitless exploration but underneath that optimistic utopia lies a seedy underbelly.  The excessiveness of free will has created an environment where sexual fornication and violence has become the routine.  The human race regressing and adopting a hedonistic lifestyle where there are zero consequences for their actions.  Whilst I don’t believe every single human being would result to that behaviour and certainly the character of William (Jimmi Simpson) restores a bit of that balance.  But having said that, because of the nature of the park, the rules don’t apply.

There is a reason for that.  Westworld removes empathy and clears the consciousness.  By removing this trait, the robots (aka the hosts) are treated like objects and the guests play their part in the game where they know they will never lose.  It results in a lack of compassion and insensitive behaviours of self-gratification.

The show constantly debates the intellectual advancement of the hosts or reveries – small gestures designed for the hosts to appear more human and realistic.  But should they have that ability?  If a guest has sex with a host would that constitute as cheating especially if you have someone in the real world?

The longer the guests occupy that world, those moral issues become blurred and to a susceptible mind, it’s easy to see why guests would fall in love with its power.  To paraphrase what Robert Ford (Anthony Hopkins) said, the people who come to Westworld are not there to discover who they are.  They already know who they are.  Westworld merely exposes it and provides that platform.

The real and mystical heart in Westworld is whether there is something deeper and meaningful, the next level of gameplay which is yet to be unlocked.  That kindly falls into the second perspective – control.

Westworld adopts this Machiavellian aura, playing up the idea of Gods and Monsters and every strategic move is a chess piece on a board.  While the guests binge and indulge on delights catered to their desires, in the real world, Westworld is facing a power struggle between the corporate ideals of Delos and the creator, Robert Ford as played by the outstanding Anthony Hopkins.

In many respects, Hopkins as Ford deserves an entire essay piece dedicated to him!  His performance evolves over the course of the series, from a man who is reflective, pondering the nature of evolution to a man who has more secrets than most people will know.  Some characters paint him as being part of the problem.  He sees himself as part of the solution.  Observant and calculating, Ford holds all the cards and just like a good Poker player, he will play his hand when the time is right.  Ford is like the anti-Willy Wonka so therefore forget Pure Imagination.  He’s an artist and in Ford’s world, there’s no time for sentiment or nostalgia which immediately gives him an advantage.  Ford is someone who understands the game and the deeper complexities that goes along with it.

In many respects, what Ford or any of the operational staff at Westworld do is no different from what the guests get up to.  Each character is as culpable as each other for their actions.  One way or another they too take the park for granted, blurring the lines of professionalism with personal and political indulgences.

Given the way Westworld is operated, can you blame the hosts for seeking their freedom?

“At first, I thought you and the others were gods. Then I realized you’re just men. And I know men. You think I’m scared of death? I’ve done it a million times. I’m fucking great at it. How many times have you died?” – Maeve

In the eyes of their “Gods”, the hosts have to be manageable.  They fulfil a basic need and a purpose.  Yet the hosts live in a hellish nightmare where repetition and loops are the norm.  Their memories and personalities adjusted or wiped in order to fit narratives.  Their bodies abused and tortured for entertainment as they endure constant pain and suffering.  Westworld is a prison, a self-contained social experiment of what humanity ultimately fears the most – rebellion.  The safeguards, the precaution of software updates and armed security are a means of protection and dominance.

If we take the analogy of the God complex, then the hosts are merely a product of ourselves.  They are a reflection of our society with all the faults and frailties.  In the end, it can be argued that Westworld is no different from our reality and yet we choose to escape to it! 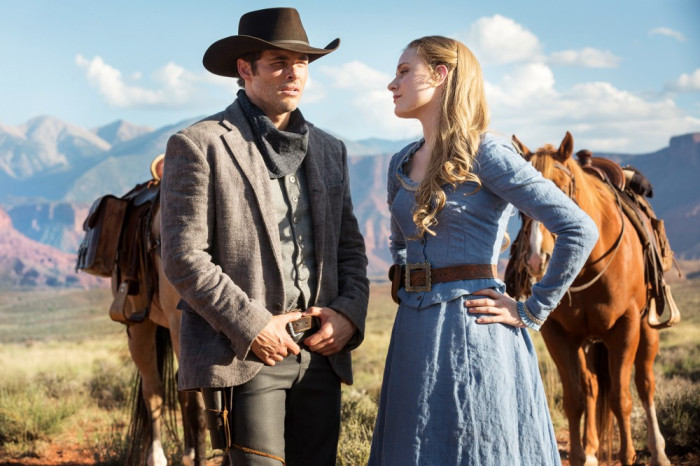 But the fascinating thing about the series (which deserves the highest praise possible) is watching the hosts come alive, breaking away from their software monotony and the in-game rules.  From The Original to The Bicameral Man, the hosts grow to acknowledge their world and understand the lie.  Their conscious awakening is like a virus unravelling past memories and their true nature.  Characters such as Dolores (the brilliant Evan Rachel Wood) and Maeve (the brilliant Thandie Newton) become advocates of that progressive change.  Westworld essentially becomes a battle of self-preservation and survival.

That’s what is amazing about this show.  Because of the flippancy in perspective, the hosts provide that missing empathy.  Their tragic back story and pain is no different from a human and their buried and suppressed grief becomes their motivation.  That connection served so well, you ultimately root for them in their journey.

The show subtly asks the audience to also question the nature of your reality.  How do you define what is real?  Are we heading towards that future?  If popular media has anything to say with such examples as The Terminator or Ex Machina, then that dark possibility could become a reality in the dawn of a new and technological evolution.  When the hosts are not doing an extreme version of the mannequin challenge, the entire concept of Westworld is a Turing test.  The revelations are not earth shattering, more like subtle hints and predictions but it leaves damaging consequences.  It certainly gives Game of Thrones a run for its money with its mind-bending twists and turns.  Just like a puzzle, the show takes its time to embed all the symmetrical pieces so by the end of it, it reaches full circle (whilst doing what good TV shows do and leave you with some unanswered questions for the next season).

Westworld is a phenomenal piece of work with each cast member delivering the best performances you’ll see on TV in a long time.

Now if someone can bring me back online just in time for season 2 in 2018, that would be perfect.

Until then, let the real games begin!