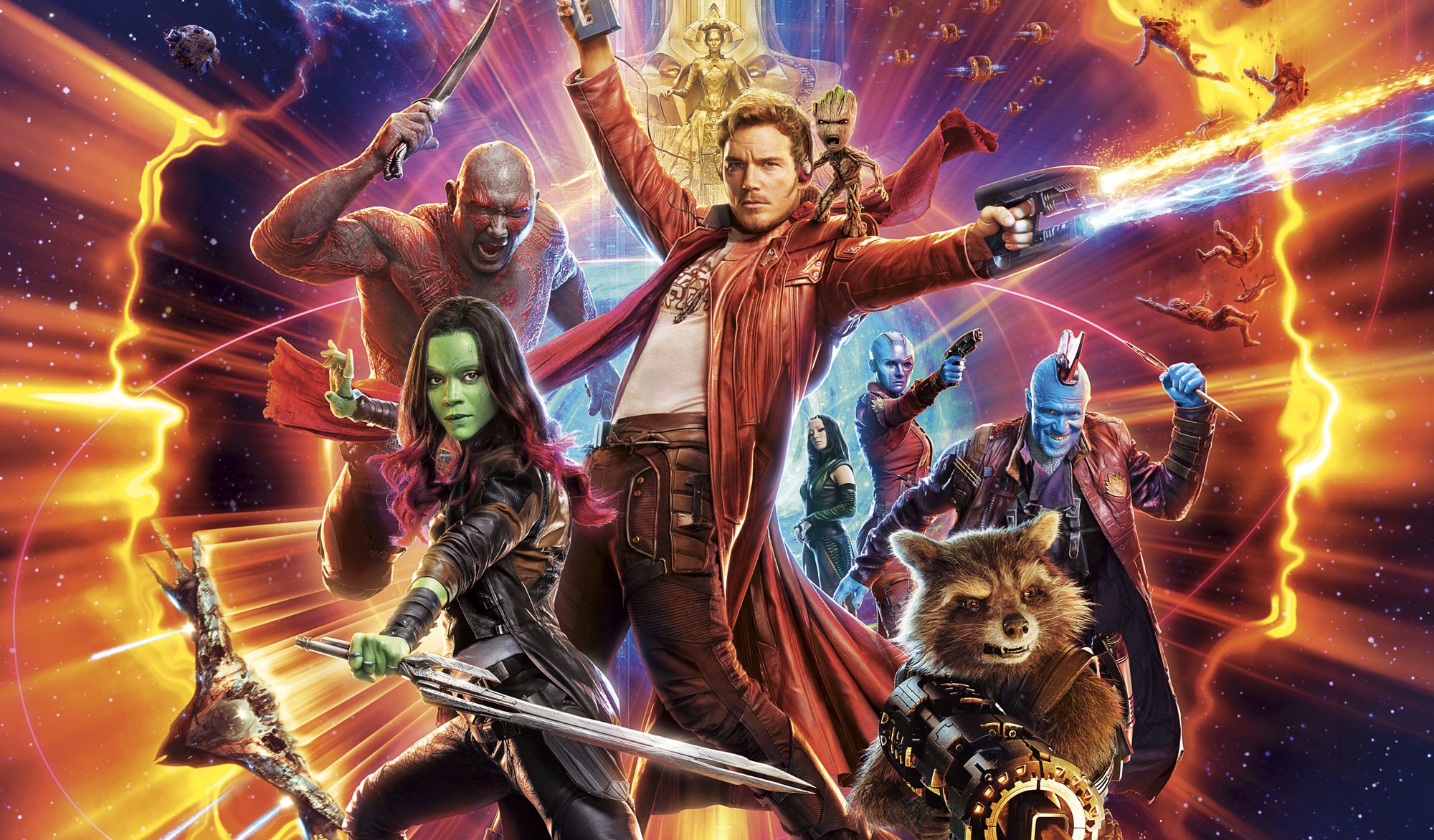 When Guardians of the Galaxy first arrived back in 2014, it took the cinema going audience by surprise.  Unless you’re a major, die-hard fan of the franchise, the names Peter Quill/Star-Lord (Chris Pratt), Gamora (Zoe Saldana), Drax (Dave Bautista), Rocket (Bradley Cooper) and Groot (Vin Diesel) were new to many of us.  It was a risky gamble and like an ode to Star Wars: Episode IV – A New Hope, Guardians of the Galaxy was funny, adventurous, exciting and well worth its place as one of the best films in the Marvel Cinematic Universe.

Fast forward to 2017 and we’re back for Guardians of the Galaxy Vol. 2.  When the first film delivered the unexpected, naturally coming into a sequel is filtered with that air of expectation and hype.  But does it live up to it?

No is my answer…and trust me, it breaks my heart to say that.

Rocket: “Are we really saving the galaxy, again?”

Rocket: “Great! We can jack up our prices if we’re two-time galaxy savers!”

You may want to take a deep breath and a seat…

Guardians of the Galaxy Vol. 2 was a let down for me.  It’s not a patch on the first film and obviously I’m going to explain why.  Given the amount of 4 or 5 star reviews out there, it’s fair to acknowledge that this review will be going against the populace grain as I felt I watched a different film from everyone else.  But to put this into context, this is coming from someone who absolutely, 100% adored the first film.

Let me start with the positives because there were some good that came out of this film.

In terms of the grand scheme of things in all things Marvel, if there’s one thing that Guardians Vol. 2 succeeds on is keeping the story self-contained.  As an audience you don’t feel that weighty pressure of keeping up to date with the Marvel Cinematic Universe in its entirety nor does the story feel like another continuous build-up towards Avengers: Infinity War.  If you’ve only seen the first Guardians film then it’s safe to say you’re in a good place.  In terms of its tonality, Guardians Vol. 2 delivers an unexpected and different vibe which is a welcomed relief considering how formulaic the Marvel pattern can be, something which I’ve criticised in the past.  The internet has naturally dubbed this The Empire Strikes Back of the Marvel universe and it’s easy to see the comparisons.  It is slightly darker, risqué in parts (swear words in a Disney film) and more personal.  Peter Quill and Gamora embrace their inner Han Solo/Princess Leia dynamic whilst answering the deeper questions involving Peter’s parentage.  There’s more of a rebellious attitude as Guardians Vol. 2 expands on their interaction with galactic species and worlds.

The story also touches upon childhood nostalgia which is given a level-up upgrade.  From references to Pac-Man, Knight Rider to The Sovereign remote controlling their drone fleet squad like an 80s arcade machine are nice additions.  In terms of humour, Baby Groot and Drax were the clear favourites.

The soundtrack of course is bang on point but the other major positive belongs to the film’s visual look and it seems like Marvel finally got the message about their films having the same colour palette.  Thanks to a change with their production cameras (the Arri Alexa to the RED Weapon 8K digital camera) and most notably an improvement in the colour grading, Guardians of the Galaxy Vol. 2 is vibrant, colourful and positively exuberant, coming to life like a page from comic book.  If you are lucky enough to view the IMAX presentation, it’s certainly one of the best looking Marvel films to date.

But you don’t go to a cinema to watch a 2 hour moving wallpaper right?  First and foremost, the story, the most pivotal and essential building block has to be good.  With exception of a few scenes, overall Guardians Vol. 2 lacked an impact.  Some can argue that the surprise factor has gone and the expectation levels are off the Richter scale and who can blame it?  The first film was a feel good exercise involving infinity stones with a sing-a-long and toe-tapping soundtrack.  But the sequel felt like an overcooked and bloated indulgence.

It’s a film without a clear and direct focus falling victim of the sequel syndrome.  Bigger doesn’t necessarily mean better.  Longer doesn’t necessarily mean better either.  While it heavily relies on our love for the characters, by the end it felt like an exhaustion due to the amount of narratives and characters on display.  It was too many.  Like a similar fault experienced with Spectre, Guardians of the Galaxy Vol. 2 starts off brilliantly but slowly starts to fall apart, especially when you start to scrutinise the plot (or a lack of one).  That vibrant, kinetic energy that oozed out of the first film, rapidly drains away in the sequel.

Now I know what you’re thinking because I mentioned it earlier – this is a different vibe for a Marvel film.  Not going to argue against that.  Guardians Vol. 2 is more of a personal character study and we get to know more about the group.  Again, not going to argue against that either.  If there’s one thing that writer and director James Gunn certainly incorporates is that additional character depth which was lacking in the first film.

But don’t confuse exposition as characterisation.

Characterisation (in a general sense) helps build a personality and an understanding.  We can be presented with the basics and allowed to build deeper interpretations for their emotions.  If we take The Empire Strikes Back analogy then someone like Han Solo, a ‘scuffy looking nerf herder’ might be roguish in attitude but has the heart and charm of a hero.  If I look at Logan, Logan is a man who has been rejected by a post-apocalyptic society whilst suffering the struggle of his physical wounds and looking after a frail Charles Xavier.  At times it’s not conveyed through words but by their actions.  But most importantly through characterisation, the characters go through an evolving journey where the stakes are raised and tested against the elements.  That’s why for me Marvel hasn’t bettered Captain America: The Winter Soldier as the best MCU film.  You know what Steve Rogers stands for – he’s the ultimate American patriot, fighting to save lives.  But because he’s from a different time era where the enemy was simpler and straightforward, in the modern world the enemy is more complex and nefarious.  For all it’s politics and double standards, it’s how Steve Rogers adapts to the new modern world and how Captain America can still be a positive influence in saving that world.

Guardians Vol. 2 doesn’t express that characterisation, certainly not enough of it.  While yes we get further character insight as their life choices come back to haunt them but it significantly adds to the runtime, disrupting the pacing.  It’s more of the same of the first film but done on a bigger scale.  The sentiment is clearly there but I didn’t think every back story or speech was necessary as the plot finds ways to explain their nature.  When you question it further, did the film needed to have the amount of characters it had?  Just like how The Big Bang Theory exposed the Indiana Jones conundrum with Raiders of the Lost Ark, some characters in Guardians Vol. 2 were there merely as plot devices or set-ups instead of being an important fulcrum to the story.  You take them away as a factor and the same story would have been available.  This is exposition.

Again you might think entirely differently on the point but there is no denying that Guardians Vol. 2 loses the charm but most importantly, the sharpness that the first film had.  This lack of focus and messy execution exposes a vulnerability that hurts the film where some of the jokes fall flat on occasion. 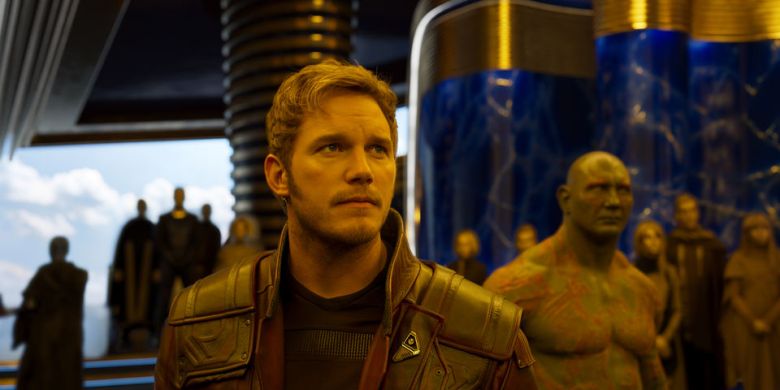 There was a simpler, more straightforward and focussed story to be told and that involved Peter Quill reuniting with his father Ego (Kurt Russell) and Yondu (Michael Rooker) participating as an important role in this equation.

One of the nice elements about this exploration is that examination of what makes a father figure.  Is biology simply enough or is a surrogate relationship healthier?  Certainly on this occasion (even though the film could have done a better job in executing it) but Peter Quill arguably gets the characterisation.  There’s an immaturity to maturity phase that he goes through as the film builds on the notion of family, borrowing the sentiment from the Fast and Furious films.  In an ideal circumstance, the film would have benefited greatly by spending more time in this creation, developing more of Peter and Ego’s relationship.  Gamora could have played an even bigger role in deciphering whether the relationship is all it’s cracked up to be.  Yet somehow the narrative gets buried amongst other side plots and the “not sure where to end it”, over-saturated action.  Therefore, it strangely lacked that satisfying reward and it’s not helped by Marvel’s long-standing tradition of not delivering a strong, compelling villain.

Drax: “There are two types of beings in the universe: those who dance, and those who do not.”

Drax: “You need to find a woman who’s pathetic, like you.”

The one thing that saves Guardians Vol. 2 is its emotional ending.  It tries to justify everything presented and given the overall theme, it’s the one thing that can catch you by surprise.  There’s also a sense of bravery about its ending as for once Marvel delivers an actual defining consequence.

But ultimately, Guardians of the Galaxy Vol. 2 tries too hard as if it was trying to re-capture lightning in a bottle.  It tries too hard to deliver everything that you loved about the first film but you get a lengthy, uneven film that lacked a natural cohesiveness.  While Guardians Vol. 2 doesn’t reach the levels of the following examples but the criticisms about focus and doing too much are in comparison to Batman v. Superman and Suicide Squad.  The one thing that stops it from going down to that level is because of the main characters of Peter, Gamora, Drax, Rocket and Groot.  It’s their pre-established relationship that just about keeps the film afloat.  But just because a film is more of a character study, doesn’t necessarily mean the plot has to be sacrificed as well.  It can work harmoniously in tandem.  Guardian’s inspiration The Empire Strikes Back covered a lot, but it achieved its tightly constructed goal without compromising on its runtime.

That in summary is why the sequel was a let down and disappointing for something I was very excited to see.  It’s not to say I was expecting a carbon copy of the superior first film although some aspects are repeated.  But Guardians of the Galaxy Vol. 2 seemed to be on the right track but lost momentum the longer it went on, bogged down by the heavy exposition in the film’s middle act, the CGI heavy third act and a genuine lack of threat or the stakes being raised.

It’s sad but it’s also a timely reminder of when it comes to sequels, the story has to hold up that weight of expectation.  Logan (which is still a contender for film of the year) exceeded in that respect.  Guardians of the Galaxy Vol. 2 might be fun but it stumbles.