Suicide Squad is the latest addition in the DC shared universe.  After the polarizing views on Batman v Superman, can Suicide Squad show DC are on the right track?  Yes and no.

“I want to build a team of some very dangerous people, who I think can do some good.” – Amanda Waller

There’s a lot of fun to be had with Suicide Squad.  If you thought Batman v Superman was too dark and gritty, you’ll certainly be pleased at the upbeat and alleviated mood in Suicide Squad‘s tone.  It’s certainly not as convoluted as Batman v Superman and there’s an instant and immediate gratification watching anti-heroes of DC comics.  There’s not many superheroes films done from this perspective and thankfully the film doesn’t take itself seriously.  So already, we have something refreshing for the cinema audience.

However there is a frustration with Suicide Squad.  For having all the right elements in play, the same issues that beleaguered the theatrical cut of Batman v Superman reared its head again and that’s a shame for a film with so much promise.  I didn’t hate the film – just like Batman v Superman, I can see potential and where the creative thinking exists.  It’s a shame it doesn’t live up to the expectations that it set out with in its execution.

The end result is a very flawed film that has all the cool aesthetic styles but lacks the substance to articulate a consistent storyline.

Suicide Squad suffers from a compromised vision not helped by the publicised re-shoots in the aftermath of the negative reviews of Batman v Superman.  If the re-shoots were to inject humour into scenes, then it was successful in that matter.  But the knock on effect resulted in an unbalanced and disrupted film that lost confidence on its original goal.  The bad guys in Task Force X don’t get to be “bad” as such.  Their specialities that made them infamous, toned down.  Dialogue prominently featured in the trailers did not make the final cut.  Choppy and uneven editing meant scenes and plot elements didn’t transition smoothly.  Lastly, for a film that was classified as a 15 certificate certainly played like a 12.

Even though my expectations were low I guess I still expected a little risk, a film that challenges the status quo on what we expect from a comic book film.  So far this year, only Deadpool has managed to achieve that.

It doesn’t help Suicide Squad‘s cause when the villain is not introduced properly, opting for a supernatural threat which we’re already use to seeing from Man of Steel and Batman v Superman.  A strong villain means characters being tested and unfortunately the jumbled editing did not convey that, resulting in a villain that lacked presence.  They could have opted for something a little more grounded which might have ended up the better choice.  It would have allowed more collaboration and banter between the squad members by showcasing their individual skill set.

“Huh? What was that? I should kill everyone and escape? Sorry. The voices. Ahaha, I’m kidding! Jeez! That’s not what they really said.” – Harley Quinn

The toughest challenge that Suicide Squad faced was how to make the villains appealing.

As a Batman fan, as much as I love the caped crusader and his brand of vigilante justice, it’s the villains that stand out.  The rogue gallery may be vast but their complex back story allows for sympathy to their twisted logic.  When I think about this ideology my mind always goes back to Batman: The Animated Series and the episode Heart of Ice, a sympathetic tale of how Mr. Freeze came to be.  His crimes not done because he can.  His crimes were to save his dying wife, cryogenically frozen in hope that one day he would find the cure.  The episode so powerful and tragic, not only did it become the official canon for Mr. Freeze’s story but it won an Emmy for Outstanding Writing for an Animated Program.

The argument I’m trying to make is, it’s simply not enough to have characters being bad for the sake of being bad.  We as the audience love watching a good villain because of their non-linear complexity and what makes DC villains so engaging is their embrace and acceptance of their extreme personalities.  They don’t owe the world anything because circumstance got in the way.

Whilst I wished Suicide Squad didn’t tone down their repertoire, I was at least pleased to see the film carry on that tradition.

There’s an abundance of character development for Deadshot (Will Smith) and Harley Quinn (Margot Robbie) and it’s no surprise that they are the entertaining stand outs, in particular Margot Robbie.  The film starts off with their story and their treatment in prison.  Whilst their crime made them notorious, their stories highlights the deep-rooted motivation and vulnerability that afflicts them.  Deadshot is driven by seeing his daughter again one day.  Harley hopes to be reunited with her “puddin” – The Joker.

What makes Margot the stand out is because of Harley’s personality and dark humour .  It adds to the levity of the film and to her credit, it certainly brings out the biggest laughs in Suicide Squad.  On the flip side, when she’s not putting on the act, it keeps true to her origin by suggesting there’s more to Harley than simply being crazy.

The downside of this is that while Deadshot, Harley Quinn and even Diablo (Jay Hernandez) get the notable attention, characters such as Killer Croc (Adewale Akinnuoye-Agbaje), Slipnot (Adam Beach), Captain Boomerang (Jai Courtney), Katana (Karen Fukuhara) and Enchantress (Cara Delevingne) don’t get the same development treatment.  They get left behind and thus creates an imbalance.

The story elements suffer from the jumbled editing and pacing, meaning character origin stories are interspersed at the wrong moment.  It immediately breaks the flow and focus and it takes a while to get back on track.  The fact the film starts off talking about Deadshot and Harley Quinn before everyone else already felt weird.  The logical route should have started with the aftermath of Batman v Superman and transitioning to Amanda Waller (the brilliant Viola Davis) setting up Task Force X.  That way her introduction to the characters is our introduction before seeing the squad members recruited for action whilst in prison.

But one of the disappointing aspects about Suicide Squad goes to Jared Leto’s Joker and it’s not the fault of the actor but what was presented.

To be frank and honest, Jared’s version of the Joker takes time to get use to.  When you’re following in the footsteps of the last actor to play the clown prince of crime, the task can be daunting.  I wouldn’t blame you if Ledger’s performance from The Dark Knight was still trapped in your mind because of how iconic he made the role.  It felt definitive.  So when it comes to re-inventing the character with a new actor, the one thing you want to do is to give the character its due-diligence.

Yet the Joker was barely in the film.  His total screen time was up to 15 minutes and for someone who has been heavily used in the marketing and trailers, in the end, The Joker essentially became a cameo and that is not enough time to really accept a new interpretation.  That along with the choppy editing is the biggest shame and you might end up questioning the justification to include the Joker in the film.  The more I think about it, if you can’t do the Joker justice, there’s no point including him.  That’s especially hard for me to say when I consider the Joker one of the best villains ever created.  It would have been better to hint at him and then introduce him at a later point or even the sequel.

To go a step further, the use of the Joker is disconnected from the main plot.  He’s a sub plot, doing his own thing and is never seen encountering the same enemies Task Force X face.  There’s also no real mystery about the Joker so forget “do you want to know how I got these scars”.  His anarchy is channelled as a gangster and in one particular scene, Joe Pesci’s famous scene from Goodfellas gets a DC homage.

However Jared’s Joker does something which is unique for the DC Universe.  We’re so use to seeing the Joker play games on individuals but we’ve not really seen an emotive Joker depicted on-screen.  Throughout Suicide Squad, he goes above and beyond to rescue his queen.  Jared still incorporates Joker’s menacing insanity.  There’s a beautiful shot of him lying on the ground laughing surrounded by guns and knives – the epitome of his nature.  But his attachment to Harley is on the same level as to why the Joker never wants to see Batman dead – they complete him and he’s having so much fun.

“Fun” is the operative word because his relationship with Harley is disturbing.  Suicide Squad incorporates another Batman: The Animated Series episode Mad Love, depicting how Harley fell in love with the Joker and transformed herself into Harley Quinn.  It’s a toxic and brutal relationship in terms of what constitutes as love but their desire to be together is certainly a unique point. 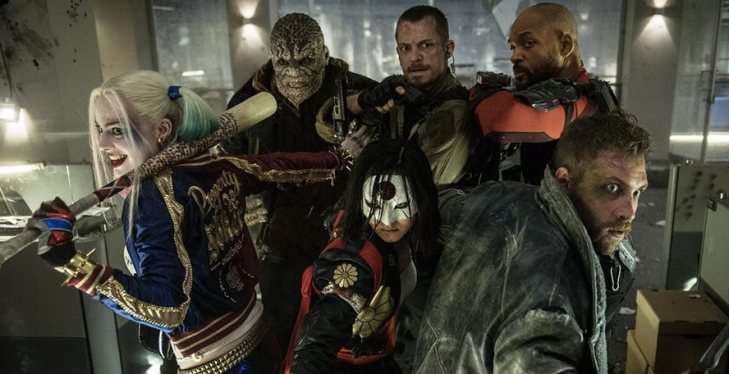 One of the best aspects of Suicide Squad is its visual aesthetic.  When the film eventually gets going, Suicide Squad comes across as an homage to John Carpenter’s Escape From New York.  It’s a self-contained battlefield with characters dressed like a 70s punk rock band – iconic and stylish, they could easily be a group in Walter Hill’s The Warriors.  The soundtrack is an eclectic mix of 70s music (Queen’s Bohemian Rhapsody), alternative music (White Stripe’s Seven Nation Army) and modern-day Rap music (Eminem’s Without Me) – music that appeals to every generation and adding to the coolness of the characters.  They go into battle like a Call of Duty multiplayer round and literally play “capture the flag” with Rick Flagg (Joel Kinnaman).  If he dies, the squad dies.

I did joke whether there would be an Ultimate Edition for Suicide Squad, in the same manner as Batman v Superman.  But honestly the fact that Suicide Squad suffers the exact same troubles as the previous DC film suggests a deep-rooted problem.

I still have confidence in DC in their cinematic universe.  The issues are fixable but DC/Warner really need to start showing some faith in their projects, the director’s vision and their ultimate goal.  Rushing to meet release dates / re-shoots / uneven editing and pacing are hurting the potential of what these films can be.  It can’t be a coincidence when there’s divisiveness between the critics and the fans.

Suicide Squad is a fun film but it’s an uneven and messy one.  What we need now is consistency, especially when we live in an era where fans and critics expect nothing but the best.

The film is about bad guys – let them be bad!  Remember that for the sequel.