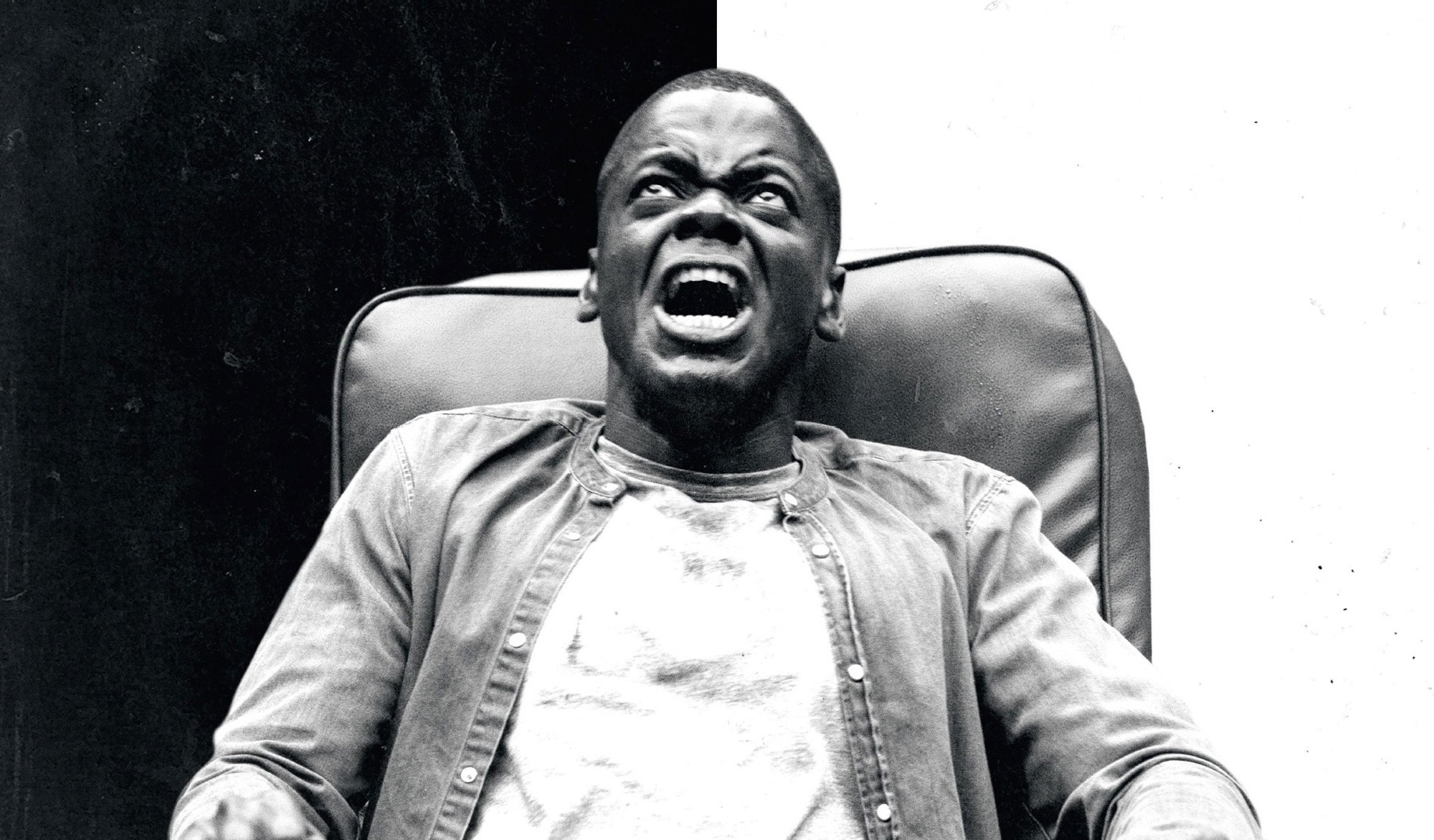 They say “a mind is a terrible thing to waste” and in Jordan Peele’s directorial debut, Get Out is certainly one of the most accomplished films of the year.

Jordan Peele certainly did his homework.  Get Out is a social thriller with a Hitchcock frame of mind.  It’s defined by its use of psychological and satirical horror rather than the blood and guts gore that the genre is usually associated with.  Influenced by films like The Stepford Wives, Rosemary’s Baby, Night of the Living Dead and a bit of Psycho, Get Out is a film based on a reality that touches upon a real social climate.

That in summary is what makes Get Out scary.  It’s the perception of a normality, a picturesque view of perfection and liberal American views but with a seedy underbelly full of dark and unsettling secrets and consequences.

Get Out’s ability to build tension and suspense is key.  Right from the first minute, it’s the slow and uneasy escalation of fear as the film starts to evolve.  Andre (Lakeith Standfield) is stalked and abducted by a mystery figure wearing a medieval mask.  The song ‘run, rabbit, run’ provides the chilling subtext to this nightmarish prelude.  But it’s through the character of Chris, played superbly by Daniel Kaluuya (Sicario) that continues this advancement.  Through his eyes he becomes our insight into this world.  His character evolves from someone who tries to be calm and rational, someone who wants to be cool with his girlfriend’s parents to downright fear for his survival.

The introduction of Rose (Allison Williams) provides a substantial base for what happens next, designed to alleviate fear from Chris’ mind about their interracial relationship.  But the real journey for Chris starts on route to the Armitage home where a deer runs out into the road and is hit by their car.  Assessing the damage, Chris takes a walk to find the dying deer and when he does, he helplessly stares at it.  Now this scene could have been included as a simple jump scare for the audience, a taster to prepare themselves for the upcoming onslaught.  However this is not a cliché.  I might be alone in this assumption but it’s the nature of how the deer ran across the road, done with such velocity that it could be argued that it was out of fear, running for its life.  In a strange way it evoked memories of Bambi when Bambi’s mother was killed by man.  Despite the warnings of the dangers in the forest, the death of Bambi’s mother is the first real taste of cruelty that the young fawn experiences – you can be hunted.  While the deer scene has obvious connections to Chris’ back story involving his mother and the vulnerable blame he feels, this example serves as the first real warning about the strangeness of Chris’ new environment.

When Chris is introduced to Rose’s parents Dean (Bradley Whitford) and Missy (Catherine Keener), it’s the language and the tone that’s highlighted.  Comments like “I would have voted for Obama for a third term” or “how long has this been going on, this “thang”?” is the parents trying to connect to Chris, associating themselves as being “down with blackness” but it creates this awkward tension.  Chris doesn’t really know how to respond – in some scenes he tries to steady himself and laugh it off as if it was nothing.  However it’s incredibly uncomfortable because the parents are not identifying him by his personality and his interests.  They’re addressing him by the colour of his skin, used as an icebreaker to start a conversation.  The casual small talk is aimed to make him feel “comfortable” by appearing overly friendly but also to drag out weak spots which can be later exploited.

The uneasiness doesn’t stop there.  The longer Chris is in the house, the more attention he receives, the more suspicious he becomes and the more of the façade is exposed.  Dean shows him around the family home filling his mind with stories and the subtle double meanings behind them.  The black servants in Walter (Marcus Henderson) and Georgina (Betty Gabriel) and their conversational responses are robotic.  Rose’s brother Jeremy (Caleb Landry Jones) asks Chris about his fitness and his strength.  But nothing can quite prepare you for the party scene where Chris is introduced to the neighbourhood.  The conversations highlight the insensitivity where blackness is commented on as a trend.  There’s even a scene where a woman casually inspects Chris’ physicality by caressing his arms.  All very creepy.  All very weird.  Just when Chris felt a comfortable relief at the sight of another black man at the party (which happens to be the missing Andre) his behaviour mimics the white guests.  Chris who is concerned and bewildered by this behaviour accidentally breaks Andre out of his trance by the camera flash from his smartphone.  Freed briefly from his hypnotic torment Andre warns Chris to literally save himself and get out.

The first half of Get Out demonstrates the slow crumbling descent of Chris’ psychology and his spirit.  He struggles to keep up appearances when he’s overwhelmed by deep-rooted concerns about his environment.  Because he’s the outsider, he’s in a highly vulnerable position where everyone is ten steps ahead.  Unexpectedly coerced into hypnosis, his smoking and his back story about his mother is taken advantage of by Missy, allowing for the first phase of the Armitage’s plan.

Get Out’s complex context is very clever where you can’t help but see real life examples coming to the forefront.  As well as my own internal experiences in which the party scene is relatable, it’s the publicised examples that’s incorporated.  The circumstances are not quite the same obviously but Get Out is certainly reminiscent of that perpetual fear and concerns.  Andre being stalked and kidnapped is reminiscent of Trayvon Martin.  Chris being asked for I.D. by a police officer on the roadside is reminiscent of instances involving Sandra Bland, Philando Castile and many others.  The more examples that are subtly thrown in, the more Get Out starts to hit home and resonate.  The animalistic themes that Get Out alludes to (the song ‘run, rabbit, run’ and the deer in the road) is reinforced by the simple notion of an animal being lured towards their prey.

In other words, don’t get caught.  Stay vigilant.

“I want your eyes, man, I want those things you see through.” – Jim Hudson

Racism and ignorance plays a major role in Get Out.  It’s an obvious observation.  However Jordan Peele’s script also delves into black culture and its thriving manipulation.

What Get Out highlights is how people can get swept up in black culture, from art to music to clothing and hair and their willingness to embrace it, love it in fact but that’s as far as the support goes.

The idea of black culture being used for profitability without recognition or acknowledgement is nothing new and Get Out cleverly taps into that notion.  Using stereotypes of what black men represent (strong, athletic, naturally built), they’re not seen as human.  They are dehumanized where their thoughts and feelings has no weight or value.  They have no rights, judged solely on the colour of their skin and their physicality.  This is modern-day slavery in action where the dynamics has shifted.  So instead of the physical chains, the “buck breaking” or the slave ships, slavery has been re-wired and re-tooled for the same purpose and for Get Out’s context – black men auctioned and sold off, viewed as commodities in which they’re kidnapped and subjected to medical experiments.  Breaking them down psychologically, hypnosis serves as the gateway to conformed obedience and dominant power via the sunken place.

Get Out is not without irony in terms of how Chris saves himself from his experimental fate – he literally picks cotton out from his ears!  Picking cotton.  That’s deep!

The cult society wants to be black.  The story involving Rose’s grandfather running at the Olympic trials but losing out to Jesse Owens is the catalyst, attributing Owens’ natural athletic ability as the main reason.  When his mind was transferred into Walter’s athletic body, running towards Chris in the darkness was a test of the ability, almost to see if the theory was true.  But in our eyes it’s scary – try to imagine a scenario where someone is running towards you at full speed and not be frightened by that.  But as previously mentioned, the cultural appropriation is limited – the support only goes so far.  They don’t want to accept the responsibility or the cultural understanding that comes along with it, especially on issues that matter most.  So something as real life and prevailing as Black Lives Matter or NFL player Colin Kaepernick’s justification for kneeling during the American National Anthem for example wouldn’t be an appeal to them.

Get Out is not saying all white people are racist – Peele’s script is very particular and deliberate in its setting, location and its attitudes, merely identifying with a particular subset.  Get Out is a statement and reflection on how something with innocent intentions, something we may not even recognise we’re doing, can have a damaging impact within a community and in this particular example, it’s the black community.

The cult liberal Americans in Get Out treat blackness as a choice, an aesthetic lifestyle exploited for their wealth and entitlements.  This ideal creates a self-perpetuating bubble where empathy and consciousness is removed completely.  Because of their societal privileges, from the silver spoon in their hypnosis teacups, mansion style houses and even ill-advised conversations they have, allows them the total and complete freedom to exercise their power.

As well as racism and the cultural elements, it’s the double standards that Get Out also articulates.  It’s not just about what the cult does but our own actions as well.  When Rod (LilRel Howery) tried to flag the attention of the authorities about Chris’ disappearance, and in fairness the story is crazy, but the lack of engagement can be viewed as a subtle commentary on whether the media and the authorities actually care.  Just like how black people were hypnotised and conditioned by the cult, we too seemingly have the narrative already in our mindset and the conclusion is drawn to a swift and abrupt close.  If the situation was reversed, would the authorities acted differently?  Intentional or not it further builds into the fearful hysteria that Get Out utilises so effectively.  Case point – when the flashing lights approached the Armitage home, how many of you thought it was the police and Chris was either going to be arrested and blamed or worse, killed despite being the real victim?

Get Out is a timely reminder not only on how racism can operate even when people think they’re not causing an offence but how humanity itself can be monstrous and wicked than an actual demon haunting us.  Get Out is dense and multi-layered on its topical themes, explored not just for entertainment value but as a thought-provoking exploration on how we view society.  Sometimes it’s not pretty and misunderstanding is inevitable but Get Out serves as the extremity of a very fundamental issue that refuses to be ignored.

To put it simply, I love this film.  Well done Jordan Peele.