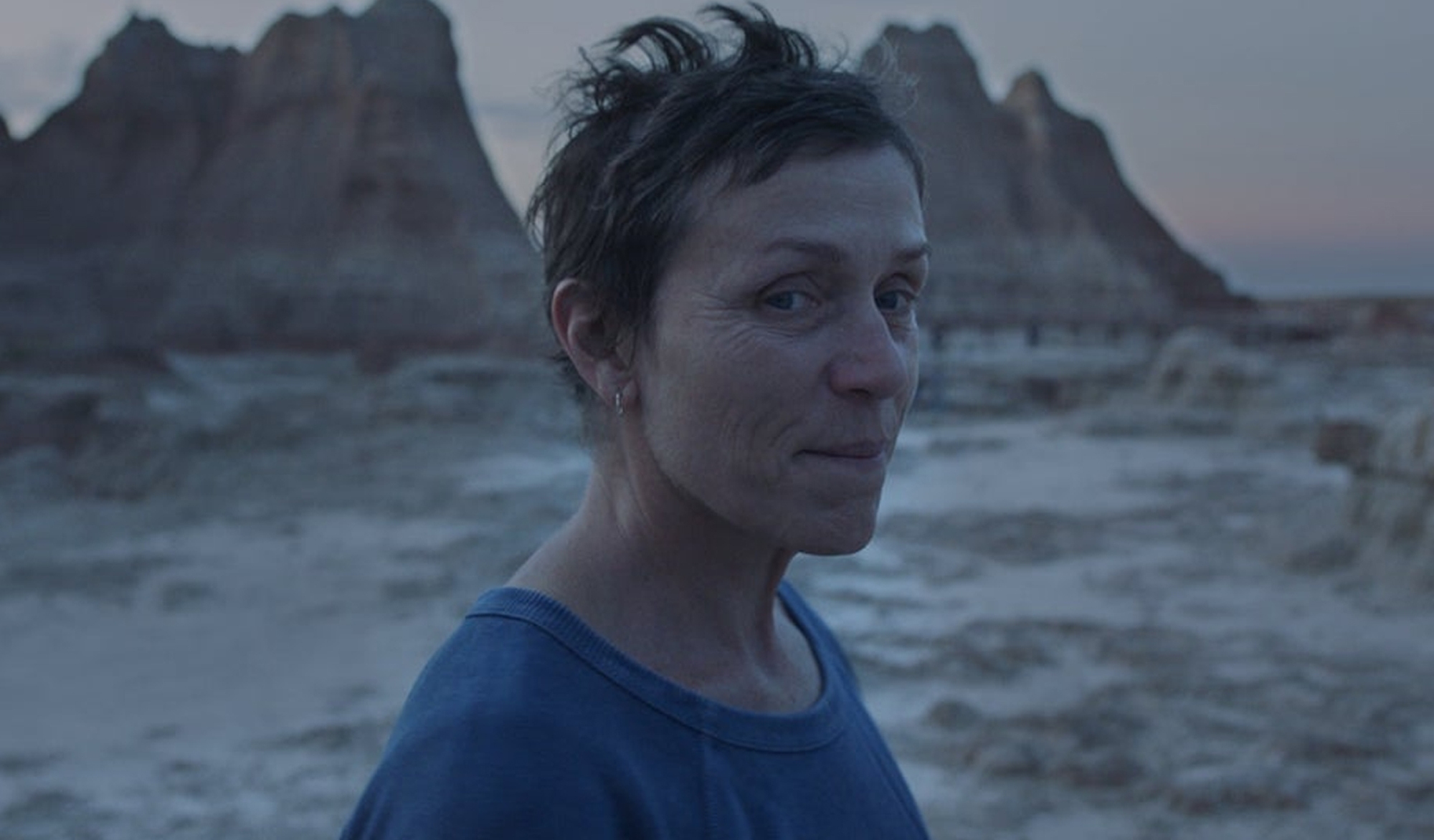 As one of the outstanding films of the year, Nomadland is cinema at its finest.

“Home – is it just a word, or is it something you carry within you?” As life-affirming statements go (and it’s one of many it adopts), Chloé Zhao’s exquisite drama Nomadland strikes a chord. Within its multi-layered architecture is a story about the re-discovery of the soul. And in the natural ebb and flow of life, what it represents is an open road slice of Americana, driven to poetic, profound, and empathetic levels by a tour-de-force masterclass by Frances McDormand.

Romanticism doesn’t feel like the right word when the life of a nomad has its considerable hardships and pitfalls of seasonal jobs and equipping yourself with the necessary equipment to survive a life away from the trappings of comfort. There are aspects within Nomadland which are reminiscent of Sean Penn’s Into the Wild where survival of the American wilderness is a life or death experience (and therefore knowing what you’re doing is advantageous). But at its heart, Nomadland is a story about people. Working-class people who believed in the fruits and riches of ‘the American Dream’, the idealisms of working hard and reaping the rewards only to be let down by that societal contract that robbed them of their equity and their livelihoods. The rejection is all too evident in one scene, featuring real-life nomads battling personal demons of grief, loss, medical and financial problems etched in their sombre words. It’s the sort of ample material that quickly sets the bar high, especially as we’re introduced to Fern (Frances McDormand). Her life is in a state of change, forced to reconcile with the devastating consequences of a mining town decimated by the Great Recession, the death of herhusband, and living day to day within the confines of her van. But as the film is quick to set the record straight – she’s not ‘homeless, just houseless’.

Based on the non-fiction book by Jessica Bruder, Zhao presents Nomadland as a modern-day utopia, a reality free from politics, excessive consumerism, and the broken realms of capitalism for a ‘back to basics’, boondocks lifestyle. Like a second chance at life, it’s an opportunity to enjoy the freedoms of the world and relish the company you meet along the way. As outsiders looking in, Zhao explores this akin to a documentary, constructing a fascinating insight into that communal life and propelled by the human stories it shares on its adventure. It’s somewhat a vessel, becoming a ‘voice for the voiceless’ of a forgotten generation who have fallen between the cracks and rebuilt their lives anew through a van-dwelling gypsum community.

There are thematic condemnations at play, of societal divides and reprehensible levels of coldness that adds fuel to the disillusioned fire it permeates. In its bleak opening, the pressure to work weighs heavily on Fern’s mind, rejecting the offer of retirement which would leave her with nothing. In any other film, this would be fertile grounding for meticulous critiques and brutal evaluations. But Zhao restrains from that emotive side of the discord, rather letting its subtle references be a backdrop instead of what her film imbues. In a modern world seemingly absent of such emotions, Zhao injects a compassionate and tender gaze within each frame, enveloping her audience with a humanising warmth amongst its compelling drama. And true to its nature, it develops a fondness of its environment, encapsulated by Joshua James Richard’s brilliant cinematography which captures Nomadland’s travelling escapade as a slow-burning, American vista filled with grace and aching beauty.

What’s impressive about Zhao’s direction is its organic presence – a familiar trait from her previous work in The Rider. Where there’s an abundance in the market of films about finding your identity and purpose, on this occasion, Zhao’s effort feels more apt and distinct. Nothing ever feels forced. The patience, the detail, the delivery, the art of personal intimacy and the use of real-life nomads, blur between the lines of life imitating art and vice versa. Ludovico Einaudi’s score which beautifully sweeps in after twenty, focussed minutes of silence, becomes that moving centrepiece that embodies McDormand’s Fern and the sense of wonder from an unseen America. And what it results in, is something uniquely genuine and sincere which Zhao brings to life with aplomb.

McDormand’s role (relishing every opportune moment) is far removed from her character in Three Billboards Outside Ebbing, Missouri. McDormand brings her typical trademark wit and style and infuses Fern with a resonating sympathy. She’s someone eager for warmth and connection, buoyed by the mood of companionship, yet, the complexities of her grief sees her retreating within herself as soon as that social contact evaporates. It’s the beautiful duality that McDormand showcases, internalising every facet of her personality that’s trapped by the memories of the past yet struggling to move forward. And because there’s so much to unpack in her performance, multiple watches will be necessary. Not because it’s difficult to understand but be amazed at how you will find something different each time in watching someone rebuild their identity. From the outset, she relies on Fern’s fiercely independent side, someone who rejects help or the offers of a comfy bed in a nice home. On another, it’s the way she loses herself to nature, refusing to stand still in witnessing a world unseen. This is an actress at the peak of her powers, immersing herself so seamlessly into the nomad culture, and it wouldn’t come as a shock or surprise if another Oscar nomination comes her way.

Nomadland has the hallmarks of a classic, capturing the multi-layered fabrics of humanity into an emotional and soulful examination of the psyche that is part hopeful and mournful, part resilient yet vulnerable, part dreamer and truthful. Zhao presents a deft-defining coping mechanism where healing is explored with dignity through community and absent friends. The fact that the film can appeal on so many different levels is its rewarding feature. And as one of the outstanding films of the year, it’s cinema at its finest.

NOMADLAND screened as part of the BFI’s London Film Festival 2020. Out in UK cinemas 1st January 2021