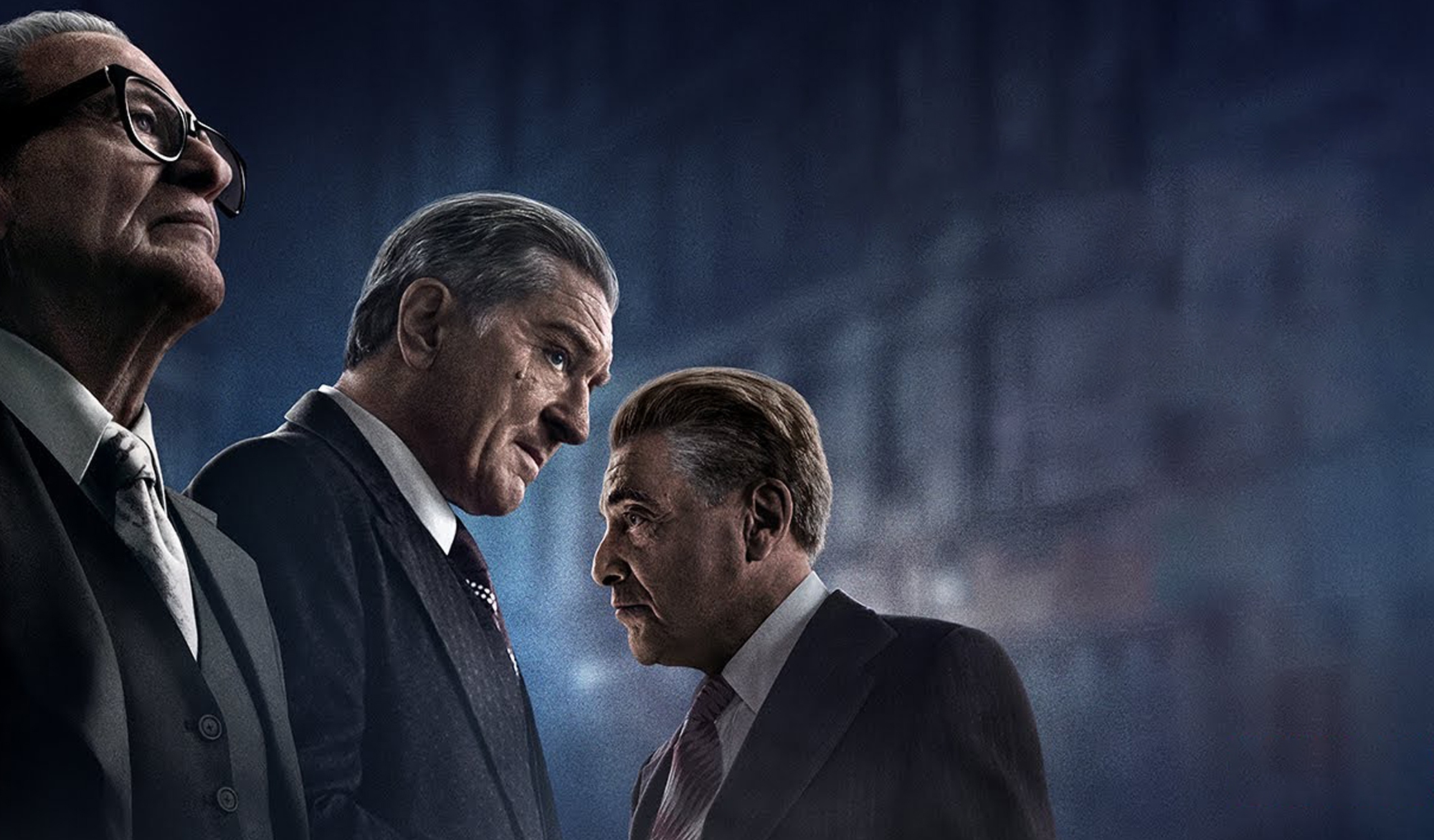 Scorsese delivers another epic masterpiece and swan song to the genre he helped re-define.

Martin Scorsese – even the best of critics can struggle to summarise his illustrious career. Sixty-eight directorial credits to his name spanning over forty years, his films may have common themes, but they’re all uniquely different.  Even at the age of 77, his passion for film has never wavered; his commitment to film restoration ensures future generations have a cinematic legacy to access to, and as a director, can still indulge in challenging subjects that test the fabric of his work.  Scorsese is one of a kind, and why I proudly profess him as my favourite director.

Forget the overlong and protracted debate over his comments regarding Marvel films being “theme park rides”.  The subject has been done to death, hijacked and fuelled by divisions that cloud the bigger picture at stake. While there is space for both forms of art and ‘theme park entertainment’ so to speak (if you’ve ever been to a 4DX screening at Cineworld, it is the literal definition of a theme park ride), the concerns about the future state of cinema are relevant, which sadly is lost amongst the discourse.  Considering that the market is now ferociously driven by IP, something as ambitious such as The Irishman – a time-spanning journey through the crime ages, feels like a rarity.  The Irishman has been ten years in the making, with scheduling and various studios turning it down only for Netflix to take up the responsibility.  At least in this ever-changing and dynamic climate, auteurs at least have an avenue to showcase their work.

And it is the studios’ loss and Netflix’s gain because it is a gamble well spent and richly deserved.  The Irishman is everything we’ve come to expect from Scorsese and his identifiable trademarks – narration, wise guys, the brutal abruptness of intense violence, an eclectic taste in music (in this case,  In the Still of the Night by The Five Satins) and a gravitational resonance towards religion.  The Irishman may feel like a showreel of his greatest hits, but it offers so much more than that.  Scorsese re-examines his filmographic legacy with an astute lens that is both reflective and poignant, in a poetic motif and swan-song to the genre he helped redefine.  And in doing so, he delivers another epic masterclass in cinema. 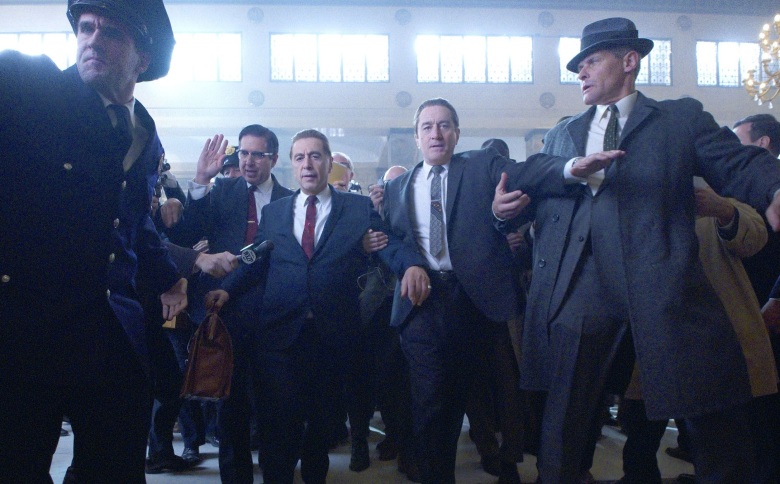 A lot of comparisons have been made to Goodfellas, which is accurate to an extent, but there’s a closer affinity with Casino (aka my favourite Scorsese film).  Both Casino and The Irishman chart the rise and fall of its characters that stretch beyond just money, power and materialistic aesthetics.  Both films cut through the foundations of friendship that’s comparable to Shakespeare. And like any Shakespeare play, it’s both exhilarating yet tragic.

Coincidentally, both of those leading roles are played by Robert De Niro, which is not at all surprising.  As much as De Niro is famous for playing hot-tempered characters (or even parodies of those same archetypes), the beauty that exudes from his role in Casino and The Irishman is when he is playing against type, where he is quiet, solemn, reserved, observant and yet can be devastatingly brutal when he needs to be.  Based on the novel I Heard You Paint Houses? by Charles Brandt, De Niro as Frank ‘The Irishman’ Sheeran works his way up from being a meat seller after his efforts in the war to a ranking hitman for the mob.  What’s so prevalent about The Irishman and its central characters is how their exploits changed the historical course of America, from the aftermath of WW2 to President Kennedy and the subsequent turbulence during his time in office. And after its significant build-up of Frank’s reputation (including the extensive detail in how he would execute people), the mood of the film begins to change when we’re introduced to Jimmy Hoffa (Al Pacino).

When you see De Niro, Pacino and Joe Pesci as Russell Bafalino – the holy trinity of A-star excellence together on screen, the film goes up a substantial gear. Reminiscent of Scorsese’s underrated film Silence, The Irishman strays away from the flashiness and opts for patient and intimate character studies as they clash on their beliefs, codes and ideals with Frank stuck in the middle as an enforcer between the two within a complicated mob relationship that’s both political and personal.

A lot of noise has been made about de-ageing, giving actors the ‘digital fountain of youth’.  Recently, it became a source of controversy with James Dean coming back to life in Finding Jack which ushers in a new era of technological and ethical debates. While resurrecting dead people should be left alone, my stance on digital de-ageing is reasonably simple – as long as the effect is integral to the plot (e.g. Blade Runner 2049 where a de-aged Rachel (Sean Young) is used as an emotional choice for Rick Deckard (Harrison Ford)), then the purpose is given a substantial use rather than a soulless (and often exposition) exercises as demonstrated in Disney’s The Lion King (2019) where it showing what was possible, not necessarily whether it was going to enhance the story.  The Irishman directly falls into the former.  It still hits you like a shock to the system, especially seeing De Niro back in his youth, but it’s something that you’ll quickly get over.  But the technology does have its limits, and the only exception was seeing a de-aged De Niro in a brief WW2 scene – no matter how impressive the tech looks, that scene will always look like De Niro becoming an unlockable character on Call of Duty.

But the mention of de-ageing only re-emphasises the core themes out of The Irishman and how time catches up with everyone. Time is unavoidable and inevitable and having the same actors portray themselves through four decades of history maintains its ambitious consistency. De Niro, Pacino, Pesci and even Scorsese himself understand the significance because their careers have spanned the same period, all time-stamped by the social and historical culture that enveloped them. And therefore, the symbolic connection has weight, and with Scorsese adding that personal, comparative touch transcends the film beyond just another ‘typical gangster film’ mentality.

Furthermore, it’s not every day where you explore the consequential aftermath of a mob crime drama.  Previous Scorsese films tend to leave their dramatic beats in limbo (to a haunting effect). The Irishman however, takes an accomplished risk in examining it fully, dealt more as a cautionary tale with all of its choices, secrets, forgiveness and regrets that ultimately define us in life. From birth to the grave, Scorsese asks with a reflective and introspective pause, “was all of it worth it in the end” when the people in our lives have faded from existence?  What is the legacy we leave behind? If anything, The Irishman functions as a eulogy on life, with all of its fragilities.

De Niro and Pacino will get the plaudits – it’s hard not too when they are phenomenally good – scratch that, phenomenally outstanding.  De Niro always carries the burden of the troubles and beautifully conveys that with a sincere performance. Pacino, in particular (who I admittedly lost count how many times he said ‘cocksucker’) found the perfect avenue to channel that classic rage of his into Hoffa.  Throughout, he embodies an arrogant, showboating of power and the essence of being ‘untouchable’. But it’s where Pacino can show other sides of Hoffa that makes his performance genuinely captivating, bringing out surreal, comedic moments with Stephen Graham’s Anthony Provenzano to a gentler side when he’s interacting with Frank’s daughter Peggy Sheeran (Anna Paquin). If you know the real story of Jimmy Hoffa, then it makes Pacino’s performance more ominous, and when he’s firing off dialogue with raw intensity, you’re watching an actor delivering his best performance in years.

However, the real MVP belongs to Joe Pesci. Coming out of retirement, this is Pesci at his finest, ditching the familiar archetype we know and love for something incredibly sinister with the added seniority of someone who knows the game and is complete control. It’s a beautiful, measured performance by Pesci; his ruthlessness will surprise people, displayed by the bone-chilling palpability towards its end.

Building to that crucial intensity (including the absence of music in that very scene), a lot of credit has to go to Thelma Schoonmaker, Scorsese’s longtime editor. Along with Scorsese, she equally deserves the credit and accolades. But The Irishman is up there with her best work, managing the challenging time-based narrative into a compelling three and a half-hour spectacle that never drags or loses its interest. And when you have the ‘who’s who’ of Hollywood starring in from Ray Romano, Jesse Plemons and Harvey Keitel, not only does Schoonmaker gives each of those actors a distinct moment to shine, but it quickly dawns on you on how much The Irishman is a celebration as well as a reunion for the people who’ve directly influenced Scorsese’s career.

Perhaps the most interesting casting choice is Anna Paquin. Some critics have pointed out that she is wasted as a character because she is almost wordless throughout, doing the actress a disservice.  Would I’ve preferred her character to be more active? Of course – any actor would. If I think about the women in Scorsese films such as Karen (Lorraine Bracco) in Goodfellas or Ginger (Sharon Stone) in Casino, they were active participants. But word count does not sum up a performance – Paquin’s impact is still felt within the story.

The respect that Paquin brings to the role is knowing that she’s not actively competing with other female predecessors from Scorsese’s yesteryear.  For a film that is centred around De Niro, Pacino and Pesci where most are playing against type, then Paquin embraces that role as well, reminiscent of another Scorsese trademark – catholic guilt and judgement.  Words are limited – seen but not heard, but Paquin displays an emotional outlet for the cold-hearted reality of Frank’s world. She’s not stupid – she knows exactly what he’s up to and capable of, and therefore her silence and facial dissatisfaction are a condemnation of his actions.

Think of Kyle Chandler’s role in the excellent The Wolf of Wall Street – amongst all the excessiveness of Jordan Belfort (Leonardo DiCaprio), his character (however small that role was), ended up being the reflective compass to the juxtaposing disparities in the real world. And for someone who sees both sides of that same compass that’s ugly and enchanting (regarding her friendship with Hoffa), Paquin (along with Pesci) has an underrated performance.

Reiterating my love of Scorsese, it’s his ability to experiment that makes him a compelling director.  Every film he directs is worth the time, and The Irishman lives up to that billing.  Without a shadow of a doubt, it is one of the best films of the year.