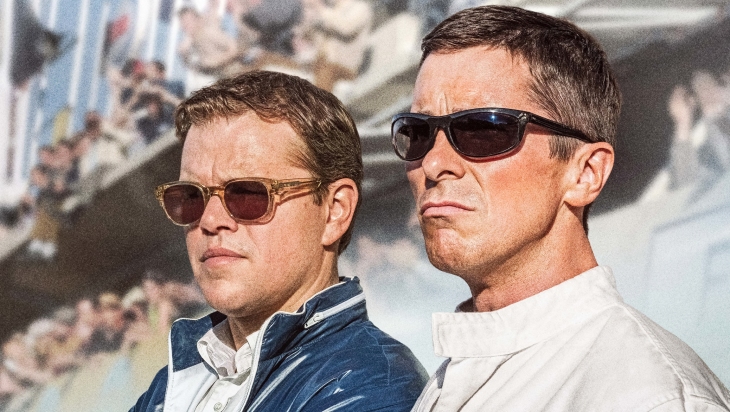 For clarity sake, Le Mans ‘66 is not a remake of the 1971 Steve McQueen film.  Only the rumoured licencing issues stopped James Mangold from using the title Ford v Ferrari for the International markets.  Confusing I know, but for this review, Ford v Ferrari is arguably the better title.

It says a lot about a film that is billed as a corporate showdown between two motoring companies. But that is far from the case.  Ford v Ferrari celebrates friendship, and the good, old fashioned underdog spirit, going up against the odds to achieve the impossible. Fresh from the critical success of Logan, James Mangold delivers a high-octane thrill ride that goes from 0 to 7,000 rpm.

If you remember James May’s excellent segment on The Grand Tour about the infamous race, the story had ‘movie material’ written all over it.  Of course, like any ‘based on a true story’ narratives, they take advantage of history to ‘beef up’ conflicts and dramatic engagements.  And similar to all racing films, they exercise the same, routine template to ease viewers into the story. Some would say that hampers the story, but I disagree.  The tried and tested formula only becomes excessively familiar and boring if its subject matter had nothing new to say. Thankfully, what sets Ford v Ferrari apart is that it is consistent enough to make its journey entertainingly possible throughout.

Mangold does a stylish job in ensuring the story behind the famous race stays grounded, refusing to delve too heavily into the corporate struggles of both Ford and Ferrari and their potential (and unsuccessful) merger and the flying tirade of insults that pushed Ford into the race.  That aspect of its history is a brief exercise with a Mad Men-esque delivery with Jon Bernthal’s Lee Iacocca doing his best Don Draper impersonation to address Ford’s need for ‘sex appeal’ in their cars.  With absolute confidence in its two leads in Matt Damon (Carroll Shelby) and Christian Bale (Ken Miles) who thoroughly perform the heavy lifting within their roles, their convergent storylines of personal struggles, health risks, personal finances and racing ambitions, make the film’s payoff rewarding.

That payoff naturally extends where it matters – on the race track.  Filmed like an extended Top Gear race, the beauty from Ford v Ferrari is how it makes its audience feel like you’re in the passenger seat alongside Bale’s Ken Miles who delivers a Jeremy Clarkson-esque commentary as if he was a celeb in (un)reasonably priced car. With a terrific score by Marco Beltrami, every gear change, every corner, every spin and every crash is an adrenaline-fuelled experience, sharply edited to meticulous levels just to maintain its energy. For anyone who’s a fan of Formula 1 or just racing in general, Mangold with his expert eye for direction hits all the right notes.

And because of this euphoric feeling that the film energises itself on, even as spectators, it’s surprisingly easy to get caught up with the drama. Again, done in a formulaic manner, no challenge is without conflict, and really rinsing every smarmy villainy out of his performance is Josh Lucus as Leo Bebbe who is always thinking of Ford’s image and its marketing value rather than galvanising the team to achieve the impossible. If placed in the modern context of racing, he’s the human manifestation of ‘team orders’ in Formula 1! Lucus’ character is incredibly annoying, but that is a testament to the actor himself who knows how to make the most of his character that is arrogant and overconfident yet has no actual racing experience to justify any of his demands.

And it is that point that Ford v Ferrari asks that question time and time again, with Mangold addressing the endless and hypocritical circumstances that Miles and Shelby face. Ford may have a ‘bottomless pit’ of money, but they don’t have the technical know-how to make it all work. As much as Mangold dedicates significant screen time to celebrate the human endeavour, the film also acknowledges the engineering feat and mastery behind making a car ‘faster’. Sometimes it was revolutionary, but in one charming scene, something old school like cotton wool and tape can do the trick to work out a car’s aerodynamics. As if the film was embodying its own motto when it repeatedly ran into those divisions – put a suit in a car and see how they like it!

But most notably in its series of contrasting exchanges and politics, you immediately get behind Ken Miles who’s continually judged on corporate popularity rather than his driving reputation.  Unsurprisingly, Christian Bale is the standout performer. Slightly brash, unremorseful and blunt, but you quickly admire Bale’s vibrancy and encyclopedic touch as Miles. I can’t promise you that you’ll be an expert about cars by the time the film finishes, but the way Bale connects with the dialogue means the knowledge is enthusiastically infectious.  But at the heart of Miles, you see someone who passionately cares about the sport, the thrill of the race and his doting commitment to his wife Mollie (Caitriona Balfe) and son Peter (Noah Jupe). And thanks to Bale’s performance, he brings Ken’s legendary racing career to life for the uninitiated and reminds fans in the know, why he is so highly regarded and celebrated with a well-deserved spotlight.

Take nothing away from Matt Damon as Carroll Shelby. Matching Bale with equal measure, he’s the counter-balance – calm but equally ruthless under that cowboy-wearing hat. Bale may steal the film’s ‘thunder’, but Damon is never far away from delivering brilliant moments of his own. From his racing introduction, Damon brings Shelby’s racing instinct to the big screen, knowing first-hand what it takes to win Le Mans.  And because of his passionate determination, it allows Ken to fulfil his racing potential and dream while freeing himself up to deal with any corporate sabotage by Ford.

The film’s only weakness is its ending, going past its ‘perfect moment’ by incorporating a few additional scenes in which a simple pan up to the sky and a title card probably would have sufficed.  But if that is the film’s only fault, then so be it – it doesn’t stop the film from achieving the heights that it does.

Bale and Damon make a formidable pair, jiving between friendship, respect, banter and an obscene amount of technical knowledge. Through their performances, they make the friendship and engineering relationship between ‘man and machine’ personal.  And as the film finally waves that chequered flag, Mangold creates pure racing at its finest.

Up there with Ron Howard’s Rush, Le Mans ‘66 (might as well give its UK title its due) is a worthy watch on the big screen, and if you enjoy it enough, it has a good shout of being considered as one of the best films of the year.