If Marriage Story existed in a blockbuster cinematic universe, then it would be simplistically billed as Kylo Ren and Black Widow having a marital fight for about two hours.  But that’s a surface level analogy; with its feet placed firmly on the ground, Noah Baumbach’s film is a moving, unflinching, uncompromising and devastating portrait on divorce.

As this is my first real exposure to Noah Baumbach’s work, (sadly I missed the hype train that was Frances Ha), Marriage Story is incredibly poignant and compelling.  You wouldn’t think that from its opening; Charlie (Adam Driver) and Nicole (Scarlett Johansson) narrating their way through complementary anecdotes about each other like a seemingly happy family unit.  But like a false sense of security, Marriage Story works best when you imagine it as a reverse ‘Woody Allen’ film, but instead of the quirky, awkward, falling in love schtick, it’s a crumbling fall from grace.

Just by his reputation, you can immediately tell this is a personal venture by Baumbach, supposedly based on his divorce with Jennifer Jason Leigh.  How much of reality versus fiction is seeped through into the film is unknown, but every scene is laced with raw honesty, deconstructed with an insane level of intimacy and reflection that is equal parts heartbreaking and occasionally comedic, reminding audiences that life has a much-needed balance.

There’s a harnessed kinship between Marriage Story and the 2018 Björn Runge’s film The Wife starring Jonathan Pryce and Glenn Close. Both analyse the contributing value placed on its two-pronged relationship and its dysfunctional aftermath between responsibility, recognition, neglect and resentment.  Marriage Story goes one step further.  Charlie and Nicole love each other; Charlie is an acclaimed theatre director in New York who is just about to launch his first play on Broadway and Nicole, the LA-born actress, sacrificed her dreams to appease his.  But like a good documentarian, Baumbach finds credible and intimate conversations throughout the divorce process, reflecting first Charlie and Nicole’s naive and amicable intentions before it inevitably spirals out of control.  What makes the process worse is how the divorce ends up affecting their eight-year-old son Henry (Azhy Robertson).

Crucially, Marriage Story reflects the ugliness behind the proceedings.  While it ebbs and flows between being presumably in Nicole’s favour and Charlie’s unprepared reluctance and compromise, Noah Baumbach’s film consciously refuses to take sides as if it was the cinema version of Switzerland.  Every obstacle or new challenge is met with a slow-burn ticking time bomb of emotions until it finally explodes like an intense, volcanic eruption of distressing and regretful accusations – and trust me, you will need to take a moment to breathe. 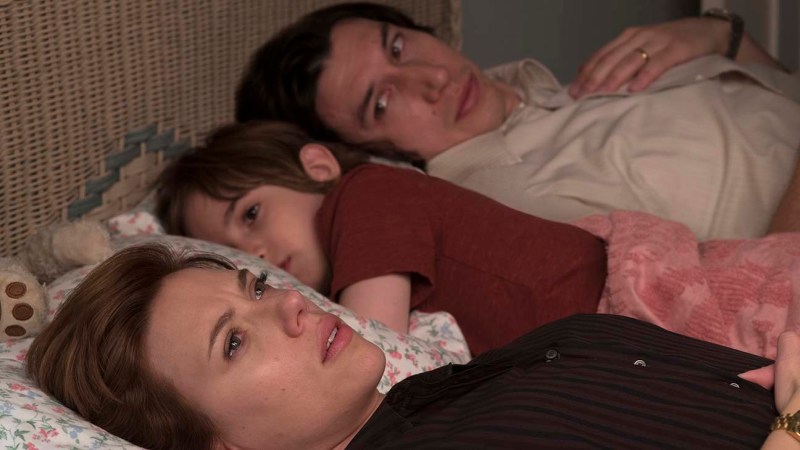 But moments like that work because Baumbach takes considerable time to build up Nicole and Charlie’s geographical pull (splitting time between LA and New York) as they fight for the best needs for their child while managing the challenging distraught it brings.  What will serve as a career highlight for Adam Driver and Scarlett Johansson, the two-leading stars bring their A-game.

Scarlett Johansson delivers a sublime performance, her best since Jonathan Glazer’s Under the Skin.  And just like in Under the Skin, she’s unrecognisable, delving into the heart of the character by painting a seamless blend between comedy and emotional breakdowns with an identifiable and socially relevant confrontation of finding your voice and identity.  What Johansson embraces so well is the constant duality faced by women between family and a professional career, trying to find that balance that would appease both. In the end, she couldn’t reconcile with both, and you empathetically connect with her understanding in making the bold decision to move forward for the sake of her happiness.  Through this decision, it brings up a timely, patriarchal conversation about male and female attitudes (brilliantly explained by Laura ‘Yaaass Queen’ Dern) – men are allowed to be the ‘fuck-ups’, women must be perfect. It has been a long time coming, and as a kindly toss-up between this and her other outstanding performance in Jojo Rabbit, but I wouldn’t be surprised if that Oscar-nominated push comes from this role.

Subsequently, 2019 is Adam Driver’s year, once again showing versatility and range that has no limits.  In Marriage Story he sings.  It’s not the first time (if we trace our steps back to Inside Lleywn Davis), but here (with its surrealist overture), it’s fraught with pain and desperation at the realisation he’s about to lose everything.  Just like Johansson, he throws himself into the role, equally matching her emotional strife, confusion and off-kilter resonance with aplomb.

But its supporting characters do their utmost best to steal the show.  Any scene with Laura ‘Yaass Queen’ Dern is an absolute treat, bringing that bulldog, Big Little Lies energy as Nicole’s divorce lawyer.  Similarly, Ray Liotta equally (and brilliantly) matches Dern with his brand of aggressive lawyering.  But the underrated hero belongs to Alan Alda, whose fatherly and mature depiction on divorce puts the entire film into perspective.

The downsides are minimal, occasionally suffering from indulgent moments and overlong lulls within an overly familiar story that with many respects, we’ve seen a thousand times over.  If we’re craving for freshness, the next level challenge could have viewed and explored its concept from a cultural perspective. But that’s just my opinion! But to overlook its Oscar-worthy performances or its genuine sincerity with its script and direction would be negligent.  No matter how it’s perceived, its gut-punch of emotions deserves to be seen, and eventually, it will win you over.