Peter Parker: “Everywhere I go, I see his face. I just really miss him.”

Happy Hogan: “Yeah, I miss him too. I don’t think Tony would’ve done what he did, if he didn’t know you were gonna be here after he was gone.”

As we bid a fond and triumphant farewell to phase three of the Marvel Cinematic Universe, it’s hard not to argue that we’re currently living in a ‘peak’ period for Spider-Man content.  Since the unification between Marvel and Sony, we’ve seen Spider-Man make his debut in Civil War and Homecoming, a successful PS4 game and the best Spider-Man film ever created – Spider-Man: Into the Spider-Verse (don’t @ me if you disagree).  As another addition to the Spider-Man consciousness, Spider-Man: Far From Home is another successful ‘thwip’ from the web-shooters – but it does come at a price.

Price? What price do you say? Well, here’s the thing – there’s a lot to admire with what Far From Home accomplishes.  Jon Watts’ direction maintains that breezy, light-hearted jolt to the veins, evolving past The Breakfast Club influences from Homecoming to National Lampoon’s European Vacation for its sequel.  Chris McKenna and Erik Sommer’s script lives up to the Spider-Man ethos of ‘With Great Power Comes Great Responsibility’.  Tom Holland continues to shine as Peter Parker, and combined with the equally impressive Zendaya as MJ, they both capture that modern teenager awkwardness.  Bringing a smile to my face, Spider-Man swinging through the streets of New York wouldn’t feel the same without the magic of Michael Giacchino’s score.

But as the Marvel Cinematic Universe expands, the magnitude of its exploration means elements do get compromised or overshadowed.  When the fate of the world is at risk, ‘the Avengers are busy’ line starts to wear thin as an excuse!  Following in the gigantic footsteps left by Avengers: Endgame was always going to be a challenge, but there was a collective sigh of relief from me when Far From Home did not venture into the ‘multiverse’ territory (as suggested by the trailers).  That’s not to say the MCU is incapable of it – Earth has already had alien invasions, ancient sorcerers and of course ‘The Snap’ meaning parallel worlds are not beyond belief.  However, given the success of what Into the Spider-Verse accomplished, to eclipse that would have taken something special and probably too soon to tackle, still fresh in the public consciousness (trust me, it’s the best Spider-Man film – don’t @ me if you disagree).  But going into Far from Home, the overriding question is how do you bring back the essence of a ‘friendly neighbourhood Spider-Man’ back down to Earth?

Well, the answer is to take the gang on-board on a European school trip – a chance to give Peter Parker a break from reality (as well as indulge in casual reinforcements of European stereotypes).  What follows is the trusted confidence in Marvel’s storytelling, negotiating a balance between humour and good-natured entertainment.

But where that compromise starts to hit home is how it manages to deal with the aftermath from Endgame.  There’s a kitchen sink mentality it deploys, throwing so many plot threads onto the screen that in some places, it unintentionally leaves it shallow or begging for more exploration.  ‘The Snap’ or ‘The Blip’ (as the cool kids say), is remembered as a befitting video tribute to their fallen heroes and the social awkwardness of classmates returning five years later.  But the truth is, it’s treated more as a punchline rather than something it completely embraces.

How does it really feel to be back now that the world has been altered so dramatically?  Besides the opening few scenes and a comical case on the plane involving MJ and Flash (Tony Revolori), it’s swept aside to ramp into gear with the next, ‘world-ending’ threat and Nick Fury (Samuel L. Jackson), hijacking the trip.

Perhaps it comes down to personal preferences instead of the film’s big-budgeted intentions, but that lack of emotional empathy gets lost amongst its thematic explorations.  You can never accuse the Spider-Man foundation of losing its touch, but one of the most appealing aspects that we all love is those relatable relationships it entrusts.  It takes nothing away from the bombastic romp that Far From Home emits from its soul.  The intentions are admirable, but there are occasional moments where you wished it took some of its core themes seriously instead of overly relying on the humour which stops it from elevating to top-tier Marvel level.

Naturally, that gravitates towards Peter Parker/Spider-Man’s arc.  Despite the ‘Iron Man lite’ overtures, Homecoming did ask what Spider-Man is without the suit.  Far From Home returns to the same attitude but is concerned with Tony Stark (Robert Downey Jr.) and his Iron Man legacy as a lingering shadow over Peter Parker.  While it aptly re-configures its father figure/mentor relationship (which is bestowed to Mysterio (Jake Gyllenhaal) as the ‘responsible’ adult), the fun acknowledgement about Spider-Man is spending time in those human limitations where he effectively grows his identity.  Something like his Spidey sense (given the jokey title of ‘Peter Tingle’) should have been utilised more as a growing payoff reward as he struggles to control it throughout the film.  But besides his powers, there’s an interesting conversation it could have had regarding the nature of heroes and how we view them.

Fans may have raised a valid point about Thor’s (Chris Hemsworth) appearance in Endgame, but Endgame’s superb first hour confidentially showed how Thor reconciled with failure.  Thor’s descent was played for laughs, but reading between the lines, the emotional outlay of his troubles was there to be seen – he gained weight and sunk deeper into his depression.  Underrated, but as an ongoing dialogue, Iron Man 3 dealt with Tony’s PTSD in the aftermath of the battle of New York.  Small narratives, but they go a long way in explaining their motivations. 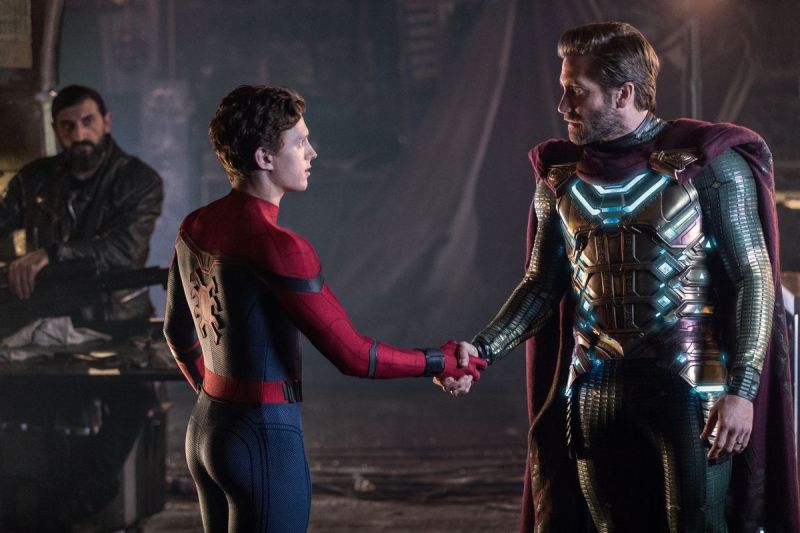 The same template could have been adopted towards Peter.  Tony Stark wasn’t perfect by any stretch of the imagination, frequently making mistakes as a ‘world police’ enforcer through quips and arrogance.  But imagine if Peter had to mentally wrestle with the idea that not all of our heroes are saints?  What if that subsequent revelation affected how he viewed the world and Quentin Beck/Mysterio’s path towards revenge if that knowledge was revealed to him?  Would he be more understanding?  What if it affected his performance as the web-crawler? What if that was a bonus along with his plans to spend time with MJ?  While that may sound like an attempt to bring Raimi’s Spider-Man 2 into the MCU (or Spider-Verse for that matter – don’t @ me if you disagree), but it is remarkable how it still holds up today.  It’s not to suggest that those moments didn’t exist on the screen, but amongst all its fast-paced action, Far From Home never quite captures that rewarding satisfaction of breaking through that age of innocence that was captured perfectly in Homecoming.  Within its comfortable realm of surface-level reveals, it doesn’t spend enough time in Peter’s struggles besides its game-changing final third of the film.

Again, that is the escapist compromise; with Spider-Man still in transition, it’s still dealing with the repercussions of Tony’s sins and his paranoid, tech-saviour qualities than reconciling with what Peter Parker inherently believes as a superhero and what he learns from it.  Using Stark tech to rebuild his suit is a very cool moment, but it’s still founded by the generous helping hand of being Tony’s protégé.

If Peter does ultimately learn something, then naively escaping from the responsibilities of Spider-man cannot be avoided (especially after its mid-credit scene).  While the re-modelled Peter fits into MCU’s overall direction, where Far From Home manages to supersede its promises comes down to a show-stealing performance by Jake Gyllenhaal.

As the world ticks by, it becomes increasingly difficult to ignore our newfound reality.  Far From Home’s premise is not too dissimilar to Iron Man 3.  Using global terrorism and a little ‘smoke and daggers’ from The Mandarin (Ben Kinglsey), Killian (Guy Pearce) takes advantage of the shaped hole left after the first Avengers movie.  Through the media, he attacked the principal values of American culture, and by shaping the ‘new normal’, he was able to hold the country hostage through crippling ‘shock and awe’ fear. “Ever since that big dude with a hammer fell out of the sky, subtlety’s kinda had its day.”  Nowadays, that ‘new normal’ is conveyed through fake news, deep fakes and a post-truth wave – all highly dangerous and manipulative considering the narratives that have developed out of its backbone.

So, it comes as no surprise that Gyllenhaal naturally fits the bill as Mysterio.  The callbacks to his brilliant performance in Nightcrawler are evident, playing a self-made (and rare blinker) opportunist elevating his career as an on-the-scene camera reporter who wielded an obscene amount of manipulative power to catch the story.  Drawing from the same breath, Mysterio is that ‘bigger picture’ of that concept.  Anyone familiar with Mysterio’s story wouldn’t have been surprised by his change of tact.  But in a world still grieving over an influential Avenger, wondering who is going to take his place, Mysterio believes he’s the next best saviour.

Watching Gyllenhaal switch through the gears between a mentor/leader to a vengeful artist was exceptional, and with Mysterio, he fundamentally questions the nature of our belief systems.  Is seeing still believing?  If Killian’s manipulation was through an orchestrated puppet, then Mysterio relies on production showmanship, cleverly updating his backstory from stuntman to former Stark employee.  At this point, he might as well be the ‘toast of Croydon’, breaking the fourth wall on how films are made and Gyllenhaal is the perfectionist director on set wearing a MoCap suit.  With Mysterio, he takes advantage in the same way we look at so-called trusted politicians – they play with hope and expectations, exploiting a current void.  Through theatricality means more viewership, gaining momentum and hijacking the discourse through rhetoric and performance.  Ego-tripping, deluded self-confidence and perceived entitlement are part of the equation, but that’s not the point – it’s about how many people you can get to blindly follow the lie.  When you have [REDACTED] introduced as an ‘Alex Jones’ type figure, Marvel’s social commentary is very much on the nose in a hearts and minds battle.

Are there limitations with his character? Sure.  There are opportune moments for empathy and greater depth with his character, but in this light-hearted affair, it plays it fast and loose.  If Mysterio did succeed, how would have he seen out his illusions when that next level Avenger threat occurred?  What happens when the new class of Avengers show up and see through his fraudulent credentials?  But just like Vulture (Michael Keaton) in Homecoming, Mysterio is a product of his environment, and that keeps Far From Home’s feet placed firmly on the ground.

Spider-Man: Far From Home leaves a giant-sized hole for its central character and the MCU’s future.  Through thrills and general excitement (despite its notable pitfalls), it manages to hold itself together where it matters.  It’s far from perfect (get what I did there), but relying on that overt Marvel confidence, it’s a fitting epilogue to close out the series.