There’s a great line in Edgar Wright’s Hot Fuzz where Doris Thatcher (played by the star of the moment Olivia Colman) says “Nothing like a bit of girl on girl!”.  However funny that line was back then, like the gift of foresight and prophesy, it is remarkably hilarious to see it come full circle!

But that’s not the only parallel.  It’s Colman’s versatile gift to deliver comedic lines with a fluid integrity that makes her fiercely entertaining.  She has come a long way since Peep Show!  In Yorgos Lanthimos’ The Favourite, she alongside her impressive ensemble cast are fantastic.

Based on a true story, imagine The Favourite as Armando Iannucci’s The Thick of It but with a touch of All About Eve and set in the early 18th Century.  It’s a full-scale assault of party politics, debaucheries and manipulative power plays that would shape the future of England at war but with two, ferocious young women in Sarah (Rachel Weisz) and Abigail (Emma Stone) at the heart of its discourse.  It’s full of pompous, prestigious and sharp wit on classism, arrogance and entitlement, but done in Lanthimos’ trademark style.

After Dogtooth, The Lobster and The Killing of the Sacred Deer, for comparison sakes, The Favourite is Lanthimos’ most accessible and entertaining towards general audiences.  That in itself is unsettling, especially by his standards. Typically, his films are always a mind-bending escapade, transporting its audience towards a surreal, dark edge of awkward trepidation.  Dogtooth, in particular, fits that bill – a film I didn’t particularly admire but was my first exposure to his work.  But in The Favourite, he steps out of his comfort zone and for two-thirds of the film, he effectively abandons it.  It’s not entirely gone, but that edge is channelled into Weisz and Stone.

It’s the ‘tit for tat’ nature that ensures The Favourite as an ultimate classic.  Bouncing off each other with energy and spirit, Sarah and Abigail are always competing for the attention of Queen Anne (Olivia Colman), knowing how petulant, naive, childish and dependent she has become, relying on others to rule in her favour.  Ill with gout, both Sarah and Abigail take advantage (learning a few secrets along the way about each other) to raise their value and worth in the Queen’s company, and only one of them can survive in their games of ‘one-upwomanship’. 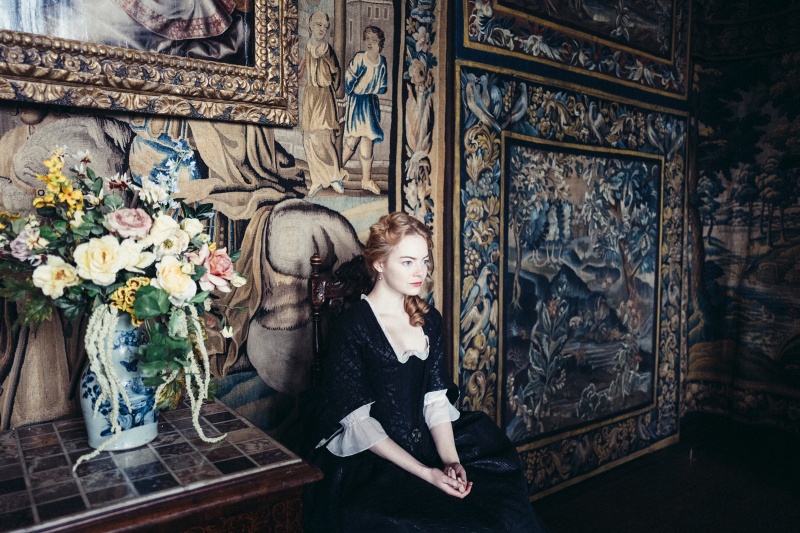 The film often takes momentary pauses to understand their reputations and resilience.  Therefore, it’s not just showing women as one-dimensionally evil or selfish.  These are characters taking charge of their own destinies, brought to the forefront by their social-economic circumstances and the growing lust for power it brings within the shifting patriarch and matriarch society.  There is a specific imbalance between Sarah and Abigail. Sarah has the eyes and ears of the Queen, fully embodying her role as an authoritarian (think Wormtongue from The Lord of the Rings Trilogy) but for Abigail, she becomes the epitome of a Drake song – starts from the bottom and works her way to the top. Each game they play morally and socially redefines who they are, and the Queen is stuck in the middle, comically encouraging it or on the receiving end of its consequences – a front that tragically masks her past.

It’s one of those rare occasions where it’s undoubtedly obvious Olivia Colman will reap all the plaudits from critics alike.  It will be deserved without hesitation or question.  But it’s hard not to overlook the power that Stone and Weisz bring.  Colman and Weisz are veterans to Lanthimos’ quirky direction, but Emma Stone is a revelation, comfortably slipping into that world as if she had been in Lanthimos’ consciousness for years.  Lanthimos brilliantly celebrates the power of the ensemble, allowing Colman, Weisz and Stone to be delightfully wicked and playfully naughty, going against the grain of any pre-conceptions about royalty and standards.  The authentic smile you produce is the realisation that every single frame from The Favourite was crafted out of sheer love and entertainment, echoing the definite enjoyment each actress had – and the happiness shows.

But amongst the comedic power play, Lanthimos has fun with the period setting.  It’s the dynamic whip-pans from the camera using an anamorphic/fish-eye lens as if to capture a warped-eye view of the world amongst the traditional perceptions of period dramas.  It’s the side-splitting and unconventional comical dancing that is part tradition and part Dirty Dancing.  There’s even commentary on a duck thanks to Nicholas Hoult’s Harley – a character who lives up to his title of a ‘pompous, vain dick’.

Where The Favourite slightly loses momentum is the notable tonal shift towards the end, changing its comedic mood back to the Lanthimos style we’ve come to expect.  A doubt does come into your mind whether Lanthimos knew how to end it, building up to a heightened point that slowly deflates.  I have a theory on its ending (which I’m happy to talk about if the question is asked), but in reality, it doesn’t matter.  The Favourite relies on what you’ve seen up until that point.  If you’ve comically endured most of its running time, then it won’t spoil too much of the party.

The Favourite is wickedly hysterical in a near perfect film and a career-best for Yorgos Lanthimos.  But as an entertainment piece, it’s easily one of the best films of the festival and the year.

THE FAVOURITE screened as part of the BFI’s London Film Festival 2018 and will be released in cinemas on 1st January 2019.