The Salem Witch Trials.  No, they didn’t burn witches – that idea is more of a fantasised fable, but the accusations, the trials, the persecutions and the subsequent female hangings, all for being a “witch”, was all it took to ensure its point in the timeline as one of the darkest periods in American history.

Fast forward to 2018 (after you’ve taken the relevant and historic pit stops through slavery, McCarthyism and the Civil Rights movement) and the essence of a ‘witch hunt’ hasn’t escaped us.  What writer and director Sam Levinson portrays is the modern day re-telling of the mass hysteria in the digital age of social media.

Assassination Nation has been referenced in reviews as being the “demon spawn of Heathers and The Purge” according to The New York Times.  I have my own – Battle Royale meets The Purge.  Heck, there’s an element of Mean Girls in there.  Yet somehow, those statements don’t stretch far enough in summing up how glorious this film is in its anarchy.  If anything, Assassination Nation feels like the true ancestral ending of Gossip Girl (if that show dropped its ‘happily ever after’ facade after its final revelation) and then crossed over with Black Mirror.  But in reality, Assassination Nation doesn’t deserve the compartmentalisation.  This cinematic beast gratuitously encompasses the three U’s – uncomfortable, unapologetic and unforgiving.

Scarily enough, you always feel America is one executive order away from this reality.  Similar to The Handmaid’s Tale, Assassination Nation must have been dealt with the gift of prophecy.  Nowadays, the ‘connect the dots’ parallels and its ‘close to reality’ demeanour might as well double as news reporting, in the same fashion that Arthur Miller’s The Crucible pointed parallels to McCarthyism.  Like the fictionalised world of Gilead, it’s patriarchal system wasn’t made overnight.  The elements were advantageously already there, waiting to burst from the crevice.  With its regressive ideology, it waited for a crucial turning point which exploited and magnified the situation into a living, breathing hell.  Levinson’s direction operates on the same plane of gradual escalation.  Born and fuelled in the climate of #MeToo and #TimesUp, Assassination Nation is a timely examination on femininity, double standards and blame culture within the current cauldron of America’s societal, political and ethical problems.

You know you’re in for a bumpy ride when a film happily displays ‘trigger warnings’ on what to expect – toxic masculinity, sexual content, the ‘male gaze’, racism, homophobia, bullying and fragile male egos just to name a few within its hyper-intensive subliminal messages.  Salem is the epicentre of such attitudes, and to paraphrase a recent Matt Damon/Saturday Night Live skit, Assassination Nation starts at eleven and then takes it to about a fifteen real quick!

The attitude can be felt throughout with Levinson refusing to present this film with any kind of moral judgement.  Sure, there are moments where characters lack responsibility and accountability for their actions in this ‘bubble haze’ of the world we live in.  Levinson stylishly documents how easy it is to slip into the escalating madness, easily drawing topical comparisons to The X-Files and its season eleven episode Familiar.  Adding a further nail in the coffin, it transcendently calls out the hypocrisy and misogyny within its multitude tribute of cinematic genres.  Not only does Levinson poke fun at cinema conventions like the slo-mo walk that Lily (Odessa Young), Sarah (Suki Waterhouse), Bex (Hari Nef) and Em (Abra) embrace, the Scorsese wise-guy narration or its Tarantino-esque violence of empowerment from Kill Bill, it never loses its momentum, consciously reminding you the point of this film and why you’re watching it. 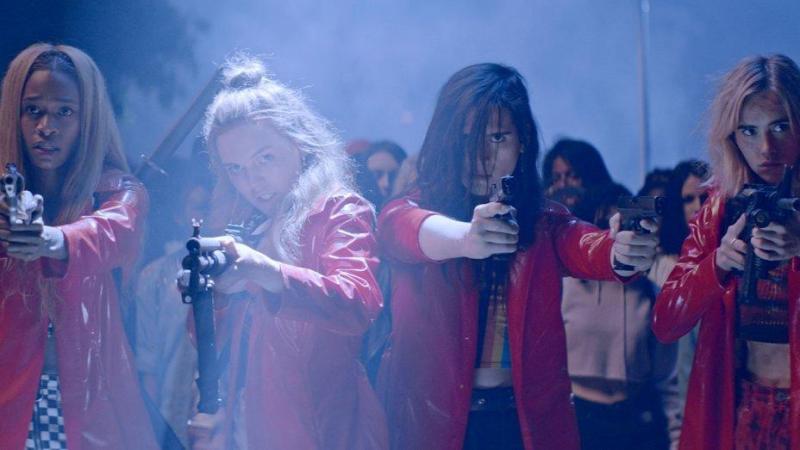 Besides its deep-rooted and relevant connections stemmed from reality, there is no escaping from its creepy, omnipresent vibe.  If it was on Instagram, it’s as if the ‘male gaze’ goes from a voyeuristic, sexualised filter to something dangerously perverse in a chilling, one track shot. Our love of social media is our digital fingerprint.  It’s a representation of our devotion to the screen Gods, either for our benefit or to our ultimate destruction as Assassination Nation instigates in its hacking scandal.  Built like a cautionary, ‘whodunit’ tale, the eerie landscape of Salem is the appearance of normality but alert for the heightened war by wearing their chosen face masks (literally or imaginatively).  Slowly revealing its true colours, the film reflects the chaos, eventually losing its soul and dismantles its self-control as concluded in its third act.  There’s no shortage of irony.  When a police officer belligerently yells “we’re good people” in a hateful mob mentality to hunt down the so-called offending high-schoolers, its dark humour is laced with an uncomfortable truth of rushing to judgement in a ‘shoot first, ask questions later’ scenario.

The variety of criticisms will be rightfully valid because of its themes, context and its superficial characters.  On the other hand, that is precisely the point of its narration.  As the desired conversation starter, it’s a necessary shock to the system which only reinforces its generational message and social awakenings.  ‘This is America’ and Levinson’s social commentary illustrates the heinous and desensitising practices, dressed up in the red, white and blue culture.

By the time the film ends, Assassination Nation feels like a rallying wake-up call against the bullshit.  This is rage personified, fed up with behavioural labels from society, and from its anti-hero equation, will take no prisoners in the process. Will it be for everyone?  Undoubtedly no.  Controversial? Absolutely!  But for those it manages to connect with, speaks volumes.  As Lily defiantly says, “this is your world – you built this”, and the righteousness of its rules re-enforce it.

No more it screams, and this highly stylised and powerful adventure was a blast.

ASSASSINATION NATION is screening as part of the BFI’s London Film Festival 2018.  For screening details and ticket availability, please visit their website for more details.