The idea of Jinn should excite anyone.  Its trailer promotes a fearless curiosity in its visionary agenda, which feels timely as a necessary commentary within the coming-of-age genre.

There are obvious parallels with Barry Jenkins’ Moonlight, which on the surface level, should be commended and applauded.  Just like Jenkins and Tarell Alvin McCraney’s script, Jinn has an autobiographical edge.  It’s a personal journey, exploring identifiable themes on sexuality and race and how experiences can shape an individual’s identity.  Furthermore, Jinn has the added bonus of factoring religion and spirituality into the thematic conversation, thanks to its impressive lead star Zoe Renee as Summer.  When there’s a clear disparity on elemental stories that represents ethnic backgrounds, diversity and gender, director Nijla Mu’min’s debut feature thrives in its groundbreaking moment.  With an absolute degree of certainty and for the good of cinema, we need more voices like that.

As a critic, you don’t want to pan films, especially when you can see a clear and unmistakable intent.  Jinn unquestionably fits into that category, with its beautiful, lush-warm cinematography and poetic mood board that colourfully and spatially reflects its engaging moods.  It’s not necessarily a bad film, but it does fall into the trap where its impact could have been magnified to greater heights, absently leaving some of its ambitious storytelling as a wasted opportunity.

Part of Jinn‘s problem is despite its visual and notable contrasts, some of its thematic elements don’t receive a level of exploratory depth, handled superficially because of its forced dialogue, reminiscent of a TV movie or a soap opera drama.  It doesn’t help the proceedings when the themes are spelt out in an overused cliché such as Summer’s teacher asking her class “what is identity?” as a homework assignment.  That’s just one example where its forced narrative is exposed only to gain an artificial response. It’s repeated in its saccharine and contrived ending, injecting a heavy dose of melodrama into the cinematic veins.  Because of these moments, it loses that crucial and believable element as the film progresses in its ‘paint by the numbers’ experience.  Jinn‘s secondary characters are not immune from its effects either.  Besides simplistically building towards its eventual climax of a talent show competition, we know next to nothing about them, especially Summer’s friends.  They serve only to aid the plot and the environmental drama surrounding her character. 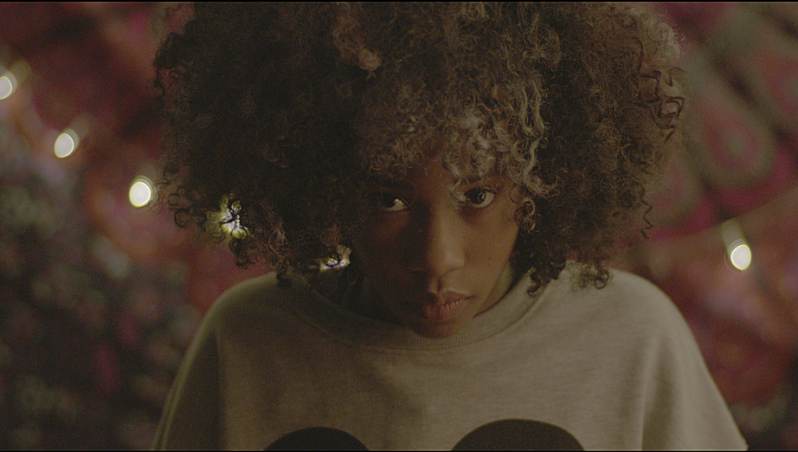 When there’s a breadth of coming-of-age films, finding a natural distinction can be difficult.  Jinn challenges that familiarity through its mother-daughter relationship.

Meteorologist and Summer’s mother Jade (Simone Missick) undergoes a spiritual awakening.  Aspiring to a higher calling, she finds peace and a solitude belonging in converting to Islam.  For Summer, this creates a curious fascination and a duelling and complex isolation, knowing she’s a free-spirit and the religion’s practices conflict with her way of life.  The increasingly complicated situation starts to become evident with Summer posting a provocative image on Instagram, her mother’s shifting attitudes and her subsequent romantic relationship with Tahir (Kelvin Harrison Jr.).

Where Jinn should be commended is its empathic depiction of Muslim culture instead of the constant barrage of negativity often seen through the media.  In a small, momentary scene of a recent terrorist attack, it makes an irrefutable argument on how compelling and graphical images can alter opinions.  Jinn decides quickly to re-focus the argument.  The film acknowledges the investigative struggle for identity, even if the directional paths for Summer and Jade are not necessarily aligned.  Jinn showcases that as a conscionable fight of the mind, body and soul but documents the impulsive naivety in understanding those perceptive changes and their consequences.

The disappointment is where those artful and articulate themes are suggested but not followed through with a committed resolve.  As much as Summer instigates her soul-searching to understand her identity and her desires, changing her personality like fitting pieces of a jigsaw puzzle (something which we can all attest to), her journey can be equally vague in its clarity and execution.  The transitions are loose, almost blasé enough to be a fashion trend that’s ‘fresh in the moment’ but evaporates as soon as something ‘new, hip and cool’ comes along.

There’s a valid argument that Jinn naturally highlights a teenager’s behaviour, going through developmental phases that allows them to be experimental, artistic and creative.  That’s the spirituality that Jinn acknowledges as “any of a class of spirits, lower than the angels, capable of appearing in human and animal forms and influencing humankind for either good or evil.”  It provides a space for bravery and failure, to learn from mistakes and re-define themselves again.  However, when that aspect is supplemented with its troublesome dialogue, then it steadily loses that appealing magnetism.

But it is safe to say Jinn excels with its lead star.  Zoe Renee’s natural charisma demonstrates a bright future and career for the young actress.  As much as Jinn could have easily been Jade’s transformative story, Nijla Mu’min’s credible eye for talent provides Renee with a complete freedom to explore her dramatic weight, even when its conventional and rudimentary melodrama gets in the way.

There’s no doubt Jinn will ultimately connect with someone, especially on its thematic and symbolic resonance.  There is no doubting the incredible talent Nijla Mu’min possesses, destined for bigger things.  But on this occasion, it just falls short of its potential.

JINN is screening as part of the BFI’s London Film Festival 2018.  For screening details and ticket availability, please visit their website for more details.