In an age of James Bond and Jason Bourne, the spy genre has become a constant re-evaluation of its modernity.  Both franchises have found a level of adaptability in understanding how the world mirrors the reality of its protagonists.  Not to be left behind, Mission Impossible has earned its right to be amongst the conversation.  Far removed from its 60s past of Peter Graves, Barbara Bain and Martin Landau, the franchise in its current format has culturally redefined its contextual history to this generation of film-goers.  Each film has been a new and enduring lease of life, embodying a stunt spectacle as well as a contemporary spy movie of its era with Tom Cruise as its committed leader.

Mission: Impossible – Fallout represents the very best of the franchise. If there was a chance for the Oscars to update its proceedings, then a ‘Best Stunt’ category is long overdue and necessary.

“How many times has Hunt’s government betrayed him, disavowed him, cast him aside? How long before a man like that has had enough?” – August Walker

One of the many successes from the Mission Impossible franchise is its ability to challenge.  In many respects, it has become the Fast and the Furious of the spy genre, always finding bigger and better ways to outdo its previous film whilst retaining a seminal connected universe.  By proxy, it creates a fantastical familiarity but also a trope in itself where audiences can mindlessly escape without thinking too much of its relevance.  That characteristic has evolved as both franchises have “grown up” to become the behemoths that they are today; Fast Five changed its concept from street racing to a heist movie with cars.  While the stunt edge has always been present throughout, it’s safe to say that Ghost Protocol set Mission Impossible on its current trend of exhilaration.

But Fallout is a different specimen, both tonally and as a retrospective piece, a game-changer as some would argue.  Director Christopher McQuarrie doesn’t rely on the laurels of the previous accomplishments of the franchise but decides to re-evaluate its purpose.  What does Mission Impossible and the IMF mean in the global terms of terrorism, political powers and the agencies designed to protect us?  Rogue Nation gave us glimpses of that ideology, putting the IMF on trial so to speak with its confrontations between William Brandt (Jeremy Renner) and Alan Hunley (Alex Baldwin).  But Fallout undertakes a personalised endeavour as a Bond-esque adventure (more Skyfall than Spectre) by forcing it to look at how it started and evolved.  Fallout might be a direct sequel to Rogue Nation but its lineage ties back to Brian De Palma’s 1996 classic. 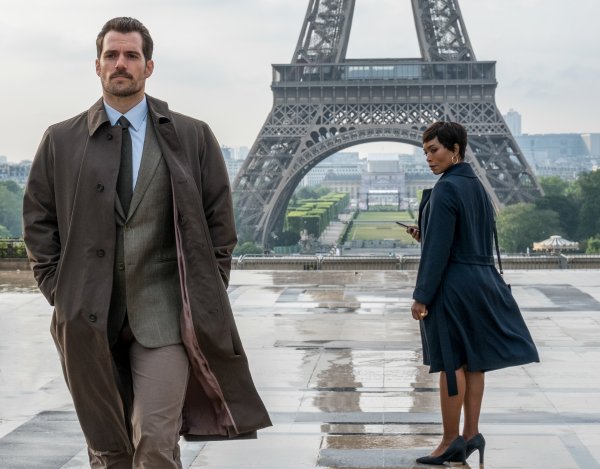 As a serious and measured spy film, McQuarrie’s imprint is an effective homage, not just to the franchise with its reminiscing stunt sequences but to the genre.  McQuarrie returns us to the world of what spying entails, so synonymous by trademark which we’ve seen in Tinker Tailor Soldier Spy, The Spy Who Came in from the Cold, Atomic Blonde and even James Bond under Connery in From Russia with Love. It’s a return of the Cold War ethics of double agents and crossings, clandestine meetings, shadowy conspiracies, infiltration and trades.  The fact that its first key scene takes place in Berlin, the historical hotspot of Cold War spies is a notable nod to its credibility.  The only thing missing would have been to film in black and white, capturing the undertones of film noir.

It’s within this context that Fallout starts to re-evaluate the world and find some grounded perspective, taking a note out of Nolan’s playbook and what he achieved with The Dark Knight.

The Dark Knight was a mirrored reflection and allegory of a Post 9/11 world and the efforts on the war on terror where fear was a stepping stone towards a fractious, unpredictable and destabilising chaos that exposed the moral foundations and rules we’ve built our lives upon.  The Joker (Heath Ledger) was unable to fulfil his ultimate plan of witnessing Gotham’s submission to that chaos thanks to Batman (Christian Bale) rescuing the soul of the city. However, his ability to turn a prominent figure, a hero in Harvey Dent (Aaron Eckhart) towards the ‘dark side’ is one of those haunting and psychological traits about the corruption of the human spirit.

A similar essence is explored in Fallout.  Solomon Lane (Sean Harris) might as well be The Joker of the MI franchise, someone who lives up to Alfred Pennyworth’s line about “some men just want to watch the world burn”.  Lane’s anti-institutional stance and zealot belief in resetting the world is as symbolically influential as Ra’s Al Ghul and The League of Shadows but represented as an upscaled version of The Syndicate called The Apostles.  Lane’s personal fascination with Ethan Hunt (Tom Cruise) not only makes him a significant villain since the days of Philip Seymour Hoffman back in MI:3, but challenges the obsessive foundations of what Hunt stands for as a corruptible force to Hunt’s moral compass.  Therefore, Ethan Hunt may share some Batman like qualities, but he might as well be the ‘Harvey Dent’ in this equation.  They both share an almost ‘gung-ho’ attitude in stepping in front of danger and considering that once again Hunt has to prove his allegiance, lives up to Dent’s “you either die a hero or you live long enough to see yourself become the villain.”  It’s a loyalty that audiences may never have questioned due to Hunt’s unprecedented heroics, but with each “impossible” mission, particularly in Fallout’s case, almost entertains the idea of a ‘dark side’.

We witness that in a staged hospital scene of that supposed darkness and abject failure where the plutonium he needed to rescue out from the hands of the terrorists is used to bomb three global locations.  The darkness reappears in Hunt’s vision of the heist where he contemplates the possibility of killing innocent people to follow through with the exchange.  Even Hunt’s dreams have become a guilt-ridden infection due to Lane’s radicalised influence.  But coded within its dark, chaotic articulation and Lorne Balfe’s superb Zimmer-esque score, McQuarrie presents a paralleled understanding in the terrific Paris chase sequence.  The mirrored sense of anticipation and impending doom is a role reversal where instead of Harvey being used as bait to lure The Joker out, Ethan is preventing ‘The Joker’ from ending up in the wrong hands.

What makes the motivations relatable as it is is how McQuarrie uses Fallout to establish that Ethan Hunt has become ‘the impossible mission’.  As Hunt dives head first into the unknown, he creates consequences, knowing each decision can have long-term damages. Does all of Hunt’s risk-taking actually surmount to anything when it removes one obstacle but creates a vacuum in its place?  What is it good for if the extent of that reach can recruit new followers at an astronomical rate?  How deep does that infection go when supposed allies and colleagues turn out to be double agents?  Fallout almost analyses Hunt as an internalised perspective of his character in the context of the entire franchise and his valued contribution to the world.  The mission itself is more of a personal expression than the physical exertions.

It’s very obvious to suggest that Mission: Impossible – Fallout is just ‘more of the same’ from the franchise.  But the key distinction is that Fallout attempts to humanise the concept. This is not just in connection to Ethan Hunt (who will always remain the focal point) but with characters who have been with us since MI:3.  In its attempt to give a conclusion, these familiar characters help reinforce the danger and the sacrifices made. When Spectre clumsily attempted to build a cinematic universe at the last minute by shoehorning all of Craig’s Bond villains as part of the same organisation, the characters of Benji (Simon Pegg), Luther (Ving Rhames) and Ilsa (Rebecca Ferguson) solidify Ethan’s world to allow a mission-driven universe to form naturally.  Ethan has a ‘win at all costs’ mentality in saving the world but his friends have become a cornerstone of his humanity so that the work he does is not always in vain.

Ilsa Faust: “What the hell is he doing?”

Benji Dunn: “I find it best not to look!”

As a vehicle well-versed in cinema language, it’s how Fallout utilises tension and suspense to a Hitchcockian level.  Like with Psycho and its famous shower scene, Fallout is almost too claustrophobic, opting for an intense, up close and personal feel that puts its audience right into the centre of that action.  That ‘Deus Ex Machina’ that most films love to do by pulling a rabbit out of a hat whenever there is a tight situation would have felt like a cheat move under Fallout, and yet is never within close reach when you want that comforting safety.

Similar to the efforts pulled with Rogue Nation and the brilliant opera scene, each stunt in Fallout is like a chain reaction of chaos that seems to escalate and evolve when you least expect it.  It’s no surprise that McQuarrie was directly influenced by the silent movie era of Chaplin, Lloyd and Keaton because Fallout is very much a visual art piece of ’cause and effect’.  Films like Mad Max: Fury Road and John Wick: Chapter 2 have used action to that extent where if you turn the sound down, the stunts tell its own synchronised story.  The rising escalation and its upgraded complexity operate like a cinematic dance that works towards its final crescendo and leaves you breathless.

What Fallout celebrates is the art of the stunt work at its most visceral best because the more reckless the stunt, the more you believe it.  What Fallout brings to the table is an action authenticity where you feel every brutal punch and every thrilling chase knowing you’ve gone through an experience.  Despite Hunt appearing to have dabbed into the dark arts for an invincibility spell, you steadily sense his vulnerability and desperation, pushed further into the insanity of the stunt.

If anything, Mission Impossible has become a living testament and commitment in its constant search for new stylish ways to integrate stunt and story.  Fallout represents the best accumulation of that.  Like the ethos of silent cinema and its incredible stunts, the relentless action is constantly pulling you and its characters out of their comfort zone.

Another Mission Impossible film is all but guaranteed.  As one chapter closes, Fallout opens the door for more possibilities.  No matter how it continues, Tom Cruise and his chase for stunt excellence will be a driving force for the continued brilliance of this franchise.