Sometimes it can be difficult to judge a musical against your typical and standard movie.  Musicals are often cheesy and light-hearted, existing in a surreal world of randomness and feel good bursts of song and dance.  Last year saw the release of Damien Chazelle’s La La Land, an homage to a bygone Hollywood era of bubblegum technicolor productions and MGM musical numbers.  It was the beautiful and layered clash between modern-day storytelling and nostalgic romanticism of the past.  However La La Land wasn’t completely a musical, infusing a weighty yet emotional drama that didn’t shy away from reality.

“The noblest art is that of making others happy.” – P.T. Barnum

There’s a lot to admire about The Greatest Showman.  First it has an addictive soundtrack thanks to the talents of Benj Pasek and Justin Paul – the lyricist duo behind La La Land (now you know who to blame if you’ve found yourself endlessly repeating the soundtrack on Spotify).  Their music is a juxtaposing mix between modern contemporary music and the stylistic visuals of the 1800s.  It oozes inspiration and with its gospel undertones (particularly on Come Alive and This is Me), the songs are a mark of celebration of individuality, diversity and societal inclusion.  Secondly it has a leading man who is totally in his element.  Hugh Jackman is no stranger to musicals having starred in Les Misérables and the West End version of Oklahoma.  The Greatest Showman was a pet project and as P.T. Barnum, he brings the charisma, fun and showmanship to the big screen.  Lastly, it’s a film that knows exactly what it is.  It’s not trying to be next West Side Story, Singin’ in the Rain or The Sound of Music.  It’s clearly inspired by that musical past but has enough confidence to chart its own future.  It serves as a breakaway from the regiment of normality, a perfect tonic to bash away the winter blues.

On an aesthetic level, The Greatest Showman was always going to excel in those areas.  But could it excel on a plot level?  Could it build an engaging narrative that would seamlessly connect between characters, its themes and most importantly the music?

Loosely based on the life of P.T. Barnum, The Greatest Showman plays fast and loose with its execution on the story. The first half of the film is tonally uneven.  It rushes through Barnum’s early childhood into adulthood and his desire to make his life better for himself, his wife Charity (Michelle Williams) and his children. He loses his job and begins an adventure where he recruits the most extraordinary individuals to join his project. Naturally it’s all conveyed through song and dance but at this pivotal moment, it’s a film struggling to find its rhythm as it transitions between the narrative and song. 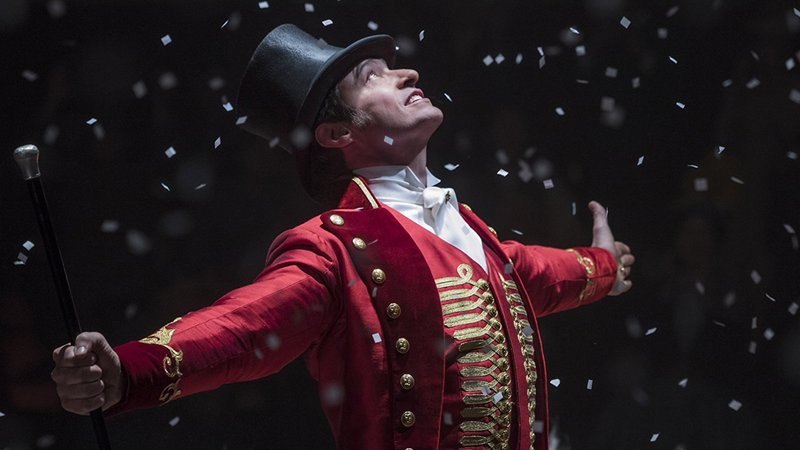 It’s a little unfair to compare it to La La Land given the difference I’ve already outlined but La La Land has something that The Greatest Showman lacks – dramatic substance.  It would have changed its light-hearted tone but because it never takes a significant pause to revel in Barnum’s quest means it lacks an important sympathetic connection.

Barnum plucks individuals out of social obscurity with a single desire of celebrity and fame but doesn’t immediately take on board the emotional history or journey they’ve had to face.  It takes a courage to step out of the shadows to fully acknowledge the emotional hardship.  However, because of the film’s fast paced nature in its early stages, that issue is swept aside in quick fashion just to move unto the next phase of the story.  The sad truth is that it becomes a missed opportunity to deeply explore those real social stigmas, the context behind them and why we still seek relevancy today.  There are clear and obvious parallels with its mirrored view on society.  It clearly wants us to connect the dots on how we view or treat individuals who are different.  However, it’s a film that is happy to stick to a middle ground refusing to upset its own apple cart by maintaining its light-hearted appeal.

Through that abandonment, Barnum’s desire for adulation, respect and praise takes centre stage.  It bares a similar resemblance to Hugh Jackman’s other role in The Prestige.  Both Angier and Barnum share the same obsessive quality, becoming single-minded and goal driven individuals.  They want to be the best and recognised in their craft.  Just like how Angier chased the applause in The Prestige, The Greatest Showman depicts that same motivation but with the sound drowned out that only Barnum (and the audience) can hear.  Artistically it is a great effect to infer motivation from a character.  However, whether you’re a fan of musicals or not, the seeds of doubt start to escalate because of the film’s lack of definition.

That might have been intentional.  The film itself questions substance through the character of James Gordon Bennett (Paul Sparks), a critic who constantly challenges the authenticity of Barnum’s shows.  But the truth is, no matter what the genre or format, the story has to be the bedrock foundation of every film.  If the elements start to stick out, then the desired effect doesn’t shine through.  The first half of the film lacked that distinct impact.

“When the sharpest words wanna cut me down/Gonna send a flood, gonna drown them out/This is brave, this is bruised, this is who I’m meant to be/This is me.” – Lettie Lutz

When the film does eventually start to branch out, then it significantly becomes a better movie.  It unsuspectingly grows on you.  The songs start to make a direct connection with its audience and most importantly, the themes and the hardships start to resonate.

The reason for this is the slight shift away from Barnum’s pursuit for recognition amongst the upper class of society to the performers of Barnum’s show.  Philip Carlyle (Zac Effron) and Anne Wheeler (Zendaya) explore the discrimination of being an interracial couple for example.  The film itself briefly looks at class divide between the poor and the rich.  But it also takes the time to tackle the neglected abandonment of Barnum’s performers.  With a lack of protection, they are subjected to further ridicule and emotional despair, one that could have ended in tragedy.

No matter how small they are, these moments count because it forces us to recognise the reality.  Some of the best musicals are underpinned by that notion and for the performers it’s more than just a song and dance. They’ve become a family.  It might be clichéd and sentimental (especially for a musical) but it helps re-address the balance that was lacking in the beginning stages of the film.  If The Greatest Showman is underpinned by a crucial and significant moment, then it belongs to Lettie Lutz (the superb Keala Settle) who sums up the entire movie with a fierce bravado that refuses to cave to any social barriers or obstacles.  This is Me is an anthem of seismic proportions designed to step into the light and embrace your talented gifts.  Without a shadow of a doubt, it is an Oscar-winning song.

The Greatest Showman knows its target audience and is fully aware of its limitations.  It’s a film of pure escapism that begs you not to over think it.  It wants you to be entertained, to visually marvel its high production values and big musical numbers that would perfectly make the transition from film to a Broadway stage.

It won’t be classified as the best movie in the world (or musical for that matter) but it is easy to see why the appeal for the film has been infectious and unanimous.