It reverses the typical and glamorous conventions of gadgets, cars and luxury that’s usually associated with spy movies in return for misdirection, secrets, cover-ups and double agents.  This is not necessarily a female James Bond film but rather a female version of Tinker Tailor Soldier Spy with a kick-ass veracity and a sexy and nostalgic 80s soundtrack.

Based on the 2012 graphic novel The Coldest City by Antony Johnson and Sam Hart, Atomic Blonde cleverly utilises the time period, set against the backdrop of the fall of the Berlin Wall.  President Reagan’s infamous words of “Mr. Gorbachev, tear down this wall” is briefly explored and confidently marked out in the title card.  The film offers a frank message to its audience – we’re not telling that side of the story!  But what Atomic Blonde encompasses is that symbolic and historic chapter in 1989.  Amongst the chaos and knock-on effect occurring in the Eastern bloc, for East and West Berliners, it was a revolutionary chance of freedom and reunification in a division that lasted for twenty-eight years between 1961 and 1989.  In the world of Atomic Blonde, the fall of the Berlin Wall serves as the last hurrah for the spy world.  It’s the one last opportunity to take advantage of the ongoing revolution before the secrets evolved into a new entity and new decade.

Essentially this is Atomic Blonde in a nutshell.  After the death of MI6 agent James Gascoigne, Lorraine Broughton (Charlize Theron) is assigned to recover an item Gascoigne had in his possession, appropriately called the list (which contains the names of every secret agent undercover in the Soviet Union) and to assassinate a double agent who goes by the name of “Satchel” who had been selling information to the Soviets.  Throughout the course of the film, Atomic Blonde becomes a twisty narrative full of misinformation and distrust, heightened by the introduction of David Percival (James McAvoy) and the interspersing of Lorraine’s debrief with her superiors at headquarters, ten days later after the events.

The comparisons between John Wick and Atomic Blonde are noticeable.  Atomic Blonde is directed by David Leitch who directed scenes on the first John Wick film.  Charlize Theron even trained with Keanu Reeves while he was filming for John Wick Chapter 2 which obviously fuels the optimistic rumours about a possible John Wick/Atomic Blonde crossover.  The fight scenes match John Wick’s creative response to violence – John Wick has a pencil, Lorraine Broughton has a shoe.  But most importantly, embodying an 80s ideology of “one person against the world”, the fight scenes leave nothing to the imagination, choreographed in a seamless dance of blood and brutality, something which is a highlight and 100% cements Charlize Theron as a great female action star.  After Mad Max: Fury Road, there is no doubt about that. 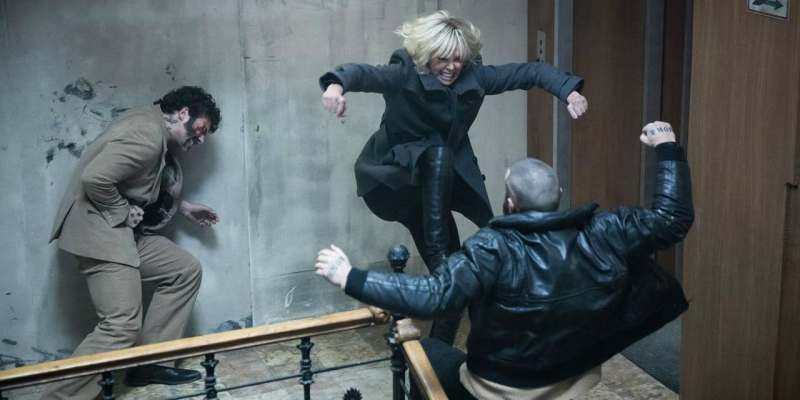 The similar characterisations between John Wick and Lorraine are derived from the same principles.  It’s not an addiction to violence but the violence serves as a survival mechanism and rage to an internalized emotion.  John Wick’s violent expression was an answer to his stolen car and murdered dog – the dog being a gift from his deceased wife tonever lose sight of his humanity.  Lorraine’s was a response to the death of Gascoigne, an intimate relationship in a risky line of work which has no guarantees of happy endings.  Coming to terms with that solemn realisation, she burns a picture of their relationship, leaving no trace evidence behind.  Once an objective is set, both characters are single-minded and determined to see out their mission.  They speak when it’s absolutely necessary, keeping their thoughts and intentions guarded and their clothing attire is the design of high tailored fashion and smart chic.

While there are similarities, Atomic Blonde is not a mere ripoff of John Wick and the film has enough merit to stand on its own in offering that distinction.  It celebrates a female liberalism and freedom where conventional inhibitions are left outside and desires are embraced, embodied by a city which makes up its own rules.  Therefore seeing a lesbian sex scene or Lorraine’s heavily bruised naked body re-enforces how she operates in the world controlled by spies and their secrets.  It’s the deliberate balance of integrity, duplicity and ambiguity of the risks she takes.  A physical fight fest such as the staircase scene showcases a survival instinct when the odds are completely against you.  Engaging in a sexual relationship with a French operative Delphine (Sofia Boutella) throws a doubt whether Lorraine empathetically cares with Delphine’s youthful naivety or just a simple methodology of getting information out of her whilst blending in with her neon-lit surroundings.  How the audience decides to view it, Lorraine’s actions are always ahead of the curve, so far ahead that even the mere details about her sexual contact with Delphine made her superiors uncomfortable with the details.  A scene so simple like that easily highlights that contrast in attitudes in an evolving world.

If there is a downside to Atomic Blonde then it comes down to its pacing and execution.  With so many strands of the storyline in motion, including the introduction of Spyglass (Eddie Marsan), a Stasi defector trying to cross the border safely with the memorised list, Atomic Blonde does trip over its own feet in revealing each key element of the mystery.  To give director David Leitch some credit, that easily could have been the intention for the audience to feel part of that increasing tension and chaos.  Who do you trust amongst the voices when others are willing to change the game for their own personal power and exploit?  The film cleverly uses news broadcasts which acts as a comparison between the fall of the wall and the events happening behind the scenes involving Lorraine, David, Delphine and the KGB which adds to the discord in Berlin.  The relevant 80s soundtrack becomes a contemporary use to free the plot from dialogue exposition.  But the film’s strong emphasis on the fight scenes and its creative use of music means that the plot doesn’t get the necessary reinforcement it boldly deserves.

So while it might not be a film that you rush out to the cinema for but it’s a fun movie that could do well as a high valued rental purchase and build a sustainable audience from there.  Because at the end of the day, this film does have potential.  It’s style over substance but keeps its tone engaging.  In Charlize Theron, you have someone who is completely dedicated and committed to change an audience convention – a female actress can do what Keanu Reeves did for John Wick.  It represents another strong female character for the big screen and a character who refuses to bow down to pressures or conformities, living by her own unique standards.  That transformation alone is worth the try even if the execution wasn’t as sharp as I wanted it to be because I loved everything else about it.

Also after watching this I think I’m in love with Charlize Theron…but then again who isn’t?