Manchester by the Sea is a powerful film.  Whilst it didn’t grab me in the same way as other Oscar nominated films, to deny acknowledgement of its impact would be a complete disservice.

Randi Chandler: “I said a lot of terrible things to you, my heart was broken, but I know yours was broken too.”

Lee Chandler: “No, you don’t understand, there’s nothing that…”

Manchester by the Sea is not the most cinematic film you’ll see this year.  It is highly realistic as it refuses to take risks or glamorize any part of the film.  It approaches events in a non-linear fashion, taking its time to paint the whole picture.  The storyline itself is nothing special as it’s a topic that is as familiar as in most dramatic films.  It is rudimentary straightforward supported by some brilliant acting performances which holds the film together.

There’s a purpose from its atmospheric surroundings.  Set in Massachusetts, the winter landscape becomes a double metaphor.  On the surface it’s part of the everyday living to the people who inhabit there.  They learn to cope and survive with it, going about their business as they mean to go on.  But underneath that snow contains a multitude of pain and despair.  Like a self-imposed clock, it patiently waits to thaw itself for healing and reconciliation but its longevity keeps the pain in focus, like a wound that refuses to heal.

There’s something about Manchester by the Sea which perfectly captures the realism of death.  It’s a sudden and abrupt handling.  It’s the thrust into a turbulent storm of every emotion on the scale.  It becomes an impersonal experience where grief takes a back seat and you’re dropped into the chaos of a life gone.  Personal affairs have to be sorted out on their behalf and you’re forced to accept a new, uncompromising and unforgiving reality.

In the case of Lee Chandler (Casey Affleck), this storm is what he has to navigate and it’s Casey’s performance that drives Manchester by the Sea. 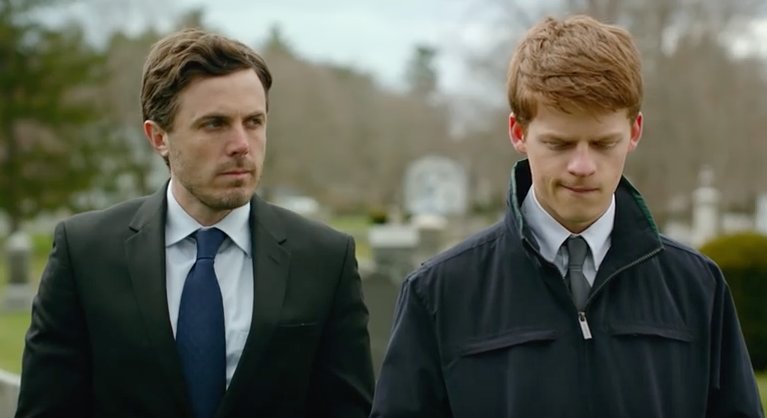 Casey Affleck as Lee Chandler delivers a quiet and internal performance.  At first it doesn’t seem like a lot but there’s a nuance from his actions.  Just like the snowy landscape, his persona is strongly defined by that.  Snow has a habit to trap and shield you from existence, creating a solitary barrier and Lee takes advantage of that.  There’s an unintentional deadpan sense of humour, a self-defence mechanism that calls into action to hide the deep pain and sorrow that resides underneath.  He lives alone, a self-contained isolation full of emptiness and does a medial job just to get by.  He prefers the company of himself, reluctantly refusing to engage in conversions with others.  When he can’t deal with life, he lashes out in an alcoholic rage.

Manchester by the Sea is a multi-layered exploration of grief and through Lee we experience those layers.  Like two sides of a coin with a difference of personalities, in a jarring like fashion the film juxtaposes his devastating past with the current and abandoning present. When the news is delivered that his brother Joe died of a heart condition (played by Kyle Chandler), he suddenly finds himself picking up the pieces of his brother’s life and that includes his sixteen year old nephew Patrick (Lucas Hedges).

As much as Lee wants to purposely remove himself away from the family equation, he is slowly pulled into his previous life in Manchester.  Old stomping grounds and friends become painful memories of a life once lived.  He’s a celebrity, a thing you would casually gossip about but it’s all for the wrong reasons.  Despite the burden of responsibilities, Lee is forced to become an observer to the world, handling the insensitivity of the people around him who don’t really understand him or his point of view.

The film of course tackles that reason and it’s dramatically revealed as a tragic consequence.  In the end, not only does that define Lee Chandler but defines his relationship with Patrick.  It is in that moment that Manchester by the Sea suddenly becomes a film about redemption, trying to forgive yourself of punishing past mistakes so you can live life again. The question the film asks is whether Lee can achieve that.  This is his test and responsibility really comes to the forefront for both characters.

Despite the tragedies we encounter, life goes on.  It moves forward whether you like it or not.  It becomes a careful balance between the darkness and the light and what Manchester by the Sea brings is that balance between death and humour.  Lee and Patrick become a double act – the more they sort out the funeral arrangements, the more they subconsciously look for peace and the best outcome without impacting on their dysfunctional lives.  Their points of view is a constant collide between practical (Lee) and unrealistic ambitions (Patrick).  So enveloped in their own opinions, they don’t see the flippancy of the other.

At first it’s hard to sympathise with Patrick. You would think that the news of his father’s passing would lead to some sort of emotional breakdown.  There’s one scene where he looks at his father’s body in the mortuary and walks off without completely registering what happened.  He becomes incredibly selfish and insensitive, using his new-found freedom to distract himself.  Some would say that’s a normal teenager reaction.  Lee as his guardian has an inadequate awkwardness to handle his behaviour.  A lot has changed from when Patrick was a small boy, helping him to catch fish on Joe’s boat.  But like grief, if you don’t deal with it appropriately, it can bite back hard and overwhelm you. 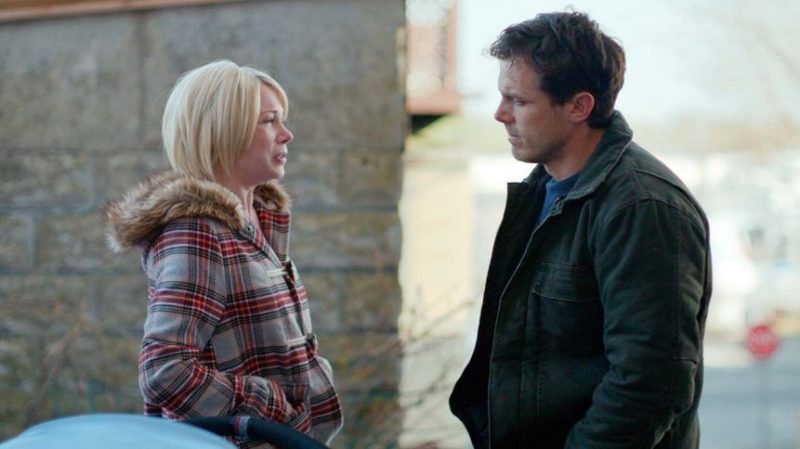 If you look a little deeper there’s a part of Patrick that Lee identifies with.  Maybe it’s the sense of his freedom and innocence of a life ahead when Lee can only see darkness for himself.  But there’s a genuine need to protect him and ensure his future by finding a decent role model instead of his own flawed individualism or from others around him.  At times Patrick comes off as a little irresponsible and naive and Lee wants to make sure he doesn’t repeat the same careless mistakes.

Patrick: “What happened to your hand?”

Patrick: “Oh, thanks. For a minute there, I didn’t know what happened.”

Here’s the thing about Manchester by the Sea.

I’m not saying it’s a bad film.  It’s a well crafted, dramatic story, tackling issues like family (the loss, the reconnection and reconciliation), grief, love and hope.  It doesn’t have a clear-cut resolution which is very much like real life.  Nothing ever ends like a neatly wrapped up bow.  However, it didn’t leave me with the emotional impact that perhaps I was looking for.  That’s a reflection on me and not the film itself.

I watched this as openly minded as I can be, a method I use to watch any film on the big screen.  I don’t think it was a conscious thing but subconsciously maybe I wanted more out of this film.  Maybe the obvious Oscar hype and expectation entered my mind without realising it and left me somewhat deflated towards the end.  The strong acting performances distinctly resonates more than the story itself and the soundtrack unintentionally becomes a distraction in some scenes.

You wonder whether it knew how it was going to end and whilst you’re always engaged with the characters, I don’t think it needed to be over two hours to convey a simplistic story.  Actress Michelle Williams who plays Randi Chandler is in the film for a short and brief time and it would have been nice to see more of her.

However, what writer and director Kenneth Lonergan does is capture humanity at its realistic best.  It’s a familiar tool set which was used on his previous films such as You Can Count on Me and Margaret.  Because Lee is suffering in silence there’s a subconscious inability to deal with grief.  His brother’s death becomes a double heartbreak and would rather suffer the pain twice over instead of trying to move forward.  To be honest, you can’t really blame Lee for feeling that way.  At one point he shockingly takes matters into his own hands to punish himself and even when presented with new relationship opportunities, his self-defence mechanism kicks in and retreats into his shell.

Whilst Manchester by the Sea didn’t resonate with me entirely, it’s hard to deny that capture of realism which works so well.  Because at the end of the day, we’re all looking for moments of happiness, an emotional freedom amongst the darkness.