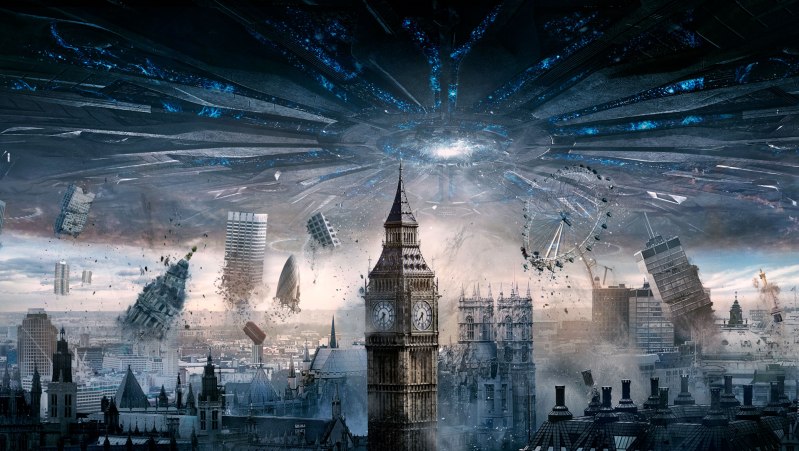 Not every film can be perfect.  Now and again, you have to encounter a silly, over the top film.  Independence Day: Resurgence is one of those films that completely throws the rule book out the window that it’s hard for me to completely justify it.

Patricia Whitmore: [Referring to interred aliens] “Why are they screaming?”

Before I get into the depths of this review, I cast my mind back to 1996.  This 10-year-old geek sat in a cinema watching the first film being completely in awe of the visual effects.  I thought it was the greatest movie ever made.  Still have the film on VHS tape!

But then you grow up, you get wiser, your film palette expands and you look back at your 10-year-old self wondering, “what the hell was I thinking?!”

Let’s be honest with ourselves – the first film was crap but it did what nearly every 90s film did – provide good fun entertainment.  It resonates with your guilty pleasure.  You don’t question the logic, you just enjoy it.

In some ways, Independence Day: Resurgence is the evolved spirit of the original 1996 film.  It’s bigger, bolder and more stupid that it raised the bar and set its own record.  This film is the equivalent of giving Sharknado a big budget summer release!

The fact that Independence Day: Resurgence was released on June 23rd, the same day as the UK voted for Brexit, seeing London under mass destruction is a pretty accurate way to describe the state of the country and our political system at the moment… 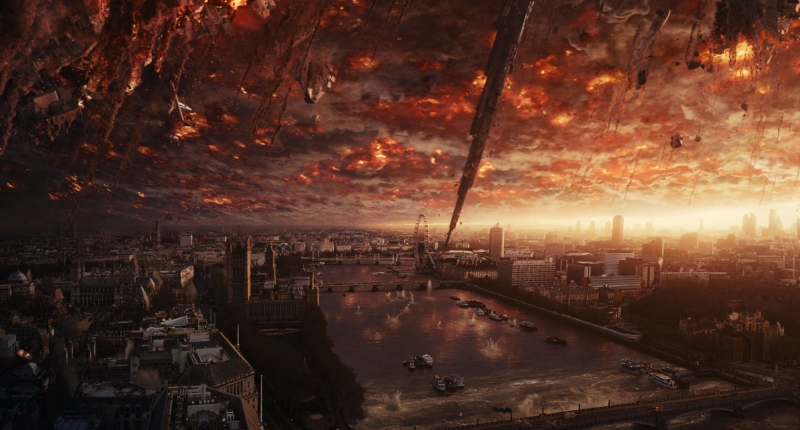 It’s been 20 years since the original invasion and Earth has changed…dramatically and I must admit, it takes a while to get use to that idea.

The alien technology left behind in 1996 has been re-purposed in every line of military defence and modern-day transport.  We even have a moon base!  Even though it’s set in the present day, the distant future has become a reality.  This is an idealistic, Back to the Future: Part 2 future instead of the grounded reality we experienced with the original.  We can fight back with our Moonraker style laser guns.  The US has a female President.  Political world leaders are united in one common goal in protecting Earth like some updated version of Ebony and Ivory.  The technology so lavish and advanced that it makes my iPhone 6 look ancient.

But like all disaster films, nothing lasts forever.  Some discoveries are made in an African country, weird symbols being drawn by people, prophetic dreams and before you know it, the aliens are back again destroying the planet.

Did I tell you that the plot is incoherent?

The plot is incoherent.

After a decent start, the plot starts introducing far out themes that requires the audience to take a massive leap of faith into the unknown.  I couldn’t even begin to tell you how this film connects the dots because it doesn’t bother.  Believability went straight out the window and disappeared down the road to infinity.  It retconned most of the first film, hoping the same trick will work again but it’s devised on a bigger scale because the fight now involves the alien queen and an intergalactic space war.  Yes you read that correctly.

You can tell that director Roland Emmerich is a sci-fi aficionado because there’s a lot of 50’s B-movie homages in Independence Day: Resurgence.  The War of the Worlds, The Day the Earth Stood Still – you name it, he throws it in there.  The aliens come in all shapes and sizes (including XXL Godzilla).  You would think we would have a fighting chance with our alien tech but yet humanity still manages to find ways for the aliens to screw us.

But in reality, the fact that this is an Independence Day film means you want to know how the world descends into a destructive chaos.  Resurgence is a visual spectacle with every dollar of that budget milked on-screen.

The destruction is CGI heavy meaning the effects look very slick.  The scale of destruction is very much like the previous film with some added new twists, such as the alien ship having its own gravity field.  You can imagine that this was the film that Emmerich wanted to make 20 years ago but there’s a downside to that.  There’s so much visual carnage that it becomes cartoonish and I did feel slightly nostalgic for the original film.  Sure the effects haven’t aged well but the mixture of practical/visual effects added to the imagination.  For the sequel, you felt as if all the money from Scrooge McDuck’s vault was looted and they made it rain! 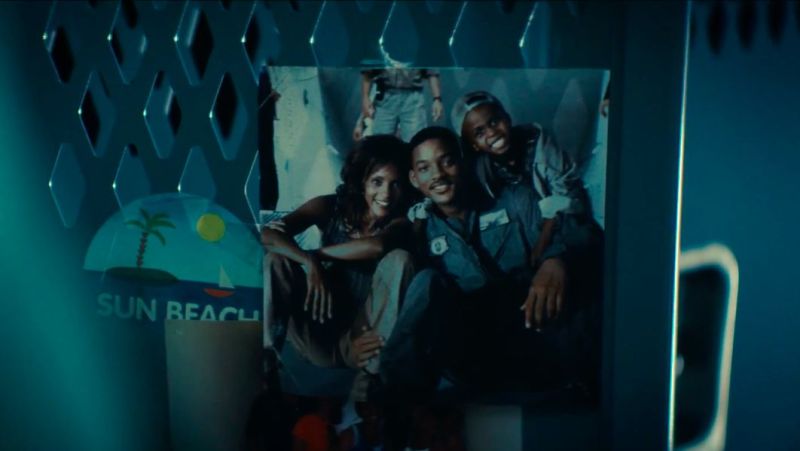 “We convinced an entire generation, that this is a battle that we could win. We sacrifice for each other no matter what the cost. And that’s worth fighting for.” – President Whitmore

For a sequel, it felt like something was missing and that notable person was Will Smith.

Back in my Gettin’ Jiggy Wit It phase while reciting the rap from The Fresh Prince of Bel Air, Will Smith was a big draw for me.  He owned the box office back in the 90s.  It’s sad not to see him (he was reportedly too expensive) but the sequel remembers him and projects his son, Dylan into the main stage.

Dylan Hiller (Jessie T. Usher) as a character doesn’t get much screen time.  Does he feel the pressure of living up to his father’s achievements as pilot?  I don’t know.  We don’t get to know him.  His character becomes the third wheel which feels strange given how his father tested this alien technology originally and died because of it.  The main attention is given to Jake Morrison (Liam Hemsworth).  Just like Dylan, he’s a pilot, he’s smart, charming and easy to look at but I didn’t really care about his storyline, his paper-thin conflict with Dylan or his fiancée, Patricia Whitmore (Maika Monroe).

Independence Day: Resurgence suffers in the same way The Expendables 3 does.  It tries to shoehorn an exciting and diverse young cast when in reality, you just want to see the original.  You want to see their how their journey progressed in extraordinary circumstances.  Instead what you get are cameo performances from everyone.  We know very little about them and the film becomes overcrowded or unnecessary.  Dr. Okun (Brent Spiner) is still alive somehow after being choked by an alien in the first film.  In Resurgence, he conveniently wakes up after being in a coma for 20 years and still has the muscle mass to walk around as if nothing happened!  It’s a miracle!  There’s a character who looks like the clone of John Oliver but just like in Multiplicity, we got one of the defunct versions.

There was a much simpler opportunity and answer for this film.  It needed more Jeff Goldblum!

As David Levinson, we’re talking about a guy who hacked an alien signal on an Apple Powerbook!  He took down aliens with an Apple Powerbook!  That’s like hacking someone’s Wi-Fi signal using a ZX Spectrum computer whilst playing snake on your Nokia 3330!  This man is the real genius and star.  We needed more Goldblum-isms. 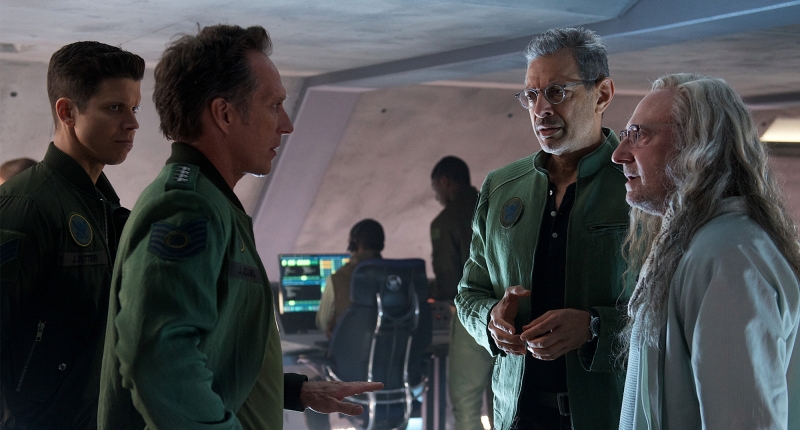 Besides the characters, it brings up another issue and that’s pacing.  The benefits of the first film is that it takes its time.  It breaks it down daily with all the events leading up to the 4th July.  In Resurgence, everything was a blur and a rush, therefore the sense of shock and awe that was present in the original just mindlessly evaporates in the sequel.  It feels like the events all took place in one day with no real sense of reflection.

So yeah, Independence Day: Resurgence is very high on cheese, a nonsensical plot, dodgy lines and filled with overcrowded, one-dimensional characters.  It also leaves the door open for another outing which is inevitable.  The film is like Marmite and you’ll either love it or hate it.

But at the end of the day, it doesn’t care.

It doesn’t care about me or you or that man/woman on the street.  It is what it is and it’s unashamed and unapologetic.  You know exactly what you’re getting so there’s no use in complaining.  It has never left its B-movie roots.  It’s so proud of its dumbness that it refuses to take itself seriously and takes ownership for it.  It won’t leave you with a brain-dead headache like you get with some Michael Bay films nor does it reinvent the wheel.  But it’s always nice to shut your mind off once in a while and in some respects, that’s a refreshing feeling.

The world may not have ended and we didn’t get the sequel we deserved.  But it was kinda fun in the end.

Good dumb movie?  Yes, as long as you have zero expectations.  Now if you excuse me, my 10-year-old self is going to watch the original and superior version.