I’m a fan of Edgar Wright and I’m sure like most people were saddened by his departure on a project he had been working on for a long time.

I deliberately held off from watching Ant-Man.  It’s not because I was trying to show solidarity with one of the coolest directors around but felt I needed that break so I could judge the film on its own merits.  Whilst ideally I should have watched it before Captain America: Civil War, Ant-Man’s involvement was straightforward.

But now that I’m catching up, does it stand up along with the consistency of the past Marvel Cinematic Universe films?  Sadly no…

I’ve said on many occasions how I felt the Marvel films were far from perfect.  Whilst they’re entertaining, at times it can be hampered by inconsistencies and formulaic structures.  Whilst on the surface, there’s nothing horribly wrong with Ant-Man as a film but at the same time, it’s guilty of those problems I mentioned.

When you compare it to other first solo outings from characters in the Marvel Universe, it didn’t wow me, serving exactly what was expected of it – to justify Ant-Man’s inclusion in the grand set up.

It’s otherwise known as a filler.

“Second chances don’t come around all that often. I suggest you take a really close look at it. This is your chance to earn that look in your daughter’s eyes, to become the hero that she already thinks you are.” – Hank Pym

There’s a certain familiarity with Ant-Man as a story concept because it plays like a mirror image of Iron Man.  You have:

There is, however, one key difference between both films.  Iron Man had the focus.  It had a cohesiveness meaning when new things were introduced, it felt like a natural progression, especially when Tony was learning what he was capable of with the suit.  You rooted for him in his excitement.  Iron Man essentially was all about Tony Stark and his transition from creating weapons of war to someone who takes responsibility for his actions.  Ant-Man doesn’t have that same luxury and ultimately why I’ve reacted not too favourably towards it.  It tries to tell two different yet parallel stories which serves as a compromise but equally doesn’t do them justice.  The film doesn’t challenge or change your perspective, resulting in a very safe, paint by the numbers and a clichéd ridden film.

There’s a stronger argument for the film to tell Hank Pym’s (Michael Douglas) side of the story.  We’re introduced to him in the beginning, having frank words with Howard Stark (John Slattery), Agent Peggy Carter (Hayley Atwell) and Mitchell Carson (Martin Donovan) over his creation of the Pym Particle.  We see him to go to extreme measures to keep his technology secret, especially away from Darren Cross (Corey Stoll), his former protégé now turned enemy.  His daughter Hope (Evangeline Lilly) leads a double life.  She gets close to Darren Cross to obtain knowledge of his version of the Pym Particle whilst getting herself battle ready to take on the responsibility of the Ant-Man suit.  With the risks involved, Hank doesn’t think she’s ready for that role yet.

There’s certainly enough material here to tell a viable story, even if you had to take liberties such as modernising it by bringing it to the present day.  But in reality, Ant-Man should have been set entirely in the past, presenting a better handle on Hank’s storyline, focussing on his achievements and consequences in becoming Ant-Man.  We could have seen the actual development of the Pym Particle and why it was so special and Hank’s ability to utilise it.  Maybe provide an explanation on why he went on missions in the suit, thus understanding his motivation and bringing context to the audience who may be unfamiliar with the character.  But in the end, his story becomes a sacrificial montage and dialogue exposition to shoe in Scott Lang (Paul Rudd).

The one positive about the character of Scott Lang is that he’s not a natural superhero.  He’s not a God like figure like Thor, a science experiment gone wrong like Hulk or even a billionaire philanthropist like Tony Stark.  He’s skilled in electronic engineering but landed himself in trouble which sent him to prison.  When he tries to rebuild his life, in particular for the sake of his daughter, it doesn’t go to plan.

That’s one of my main issues with this film.  It’s obvious that the Scott Lang story is integral but somehow it comes off as a rushed plot device.  Hank Pym becomes a mentor-like figure and hires Scott in a VERY roundabout way to put Scott’s skills to good use – to perform a heist at Hank’s former company, Pym Technologies.  Whilst a reason was given for it, Hank could have easily let his daughter perform the job.  Her experience, knowledge and position at the company suggests so.  Despite the charming heroics I simply didn’t have the same interest or connection for Scott Lang.  His storyline came across as too simplistic and the script didn’t allow for Paul Rudd to truly stamp his mark on the film in the same way Robert Downey Jr. did for Iron Man – sorry folks.

As for the villain, again it’s another unconvincing attempt by Marvel.  In Darren Cross you have a another guy being bad for the sake of being bad because the plot requires it.  His motivations are completely generic, obsessed with perfecting his creation of the Yellowjacket suit.  This is despite having a ‘goo’ gun which he could have also sold for profit and funnily enough, the gun was only used once when he could have use it again to his advantage to solve his problems.  Yet, that’s not the main issue.  We never learn anything deeper about his character besides the simple convention of getting even with Hank Pym.  Again, not the fault of the actor but the script itself.

At least in Iron Man, the characterisations of each character was fleshed out.  Sadly for Ant-Man, it doesn’t move pass the ‘need to knows’ and acts on a matter of convenience to get from plot A, to B and finally to C. 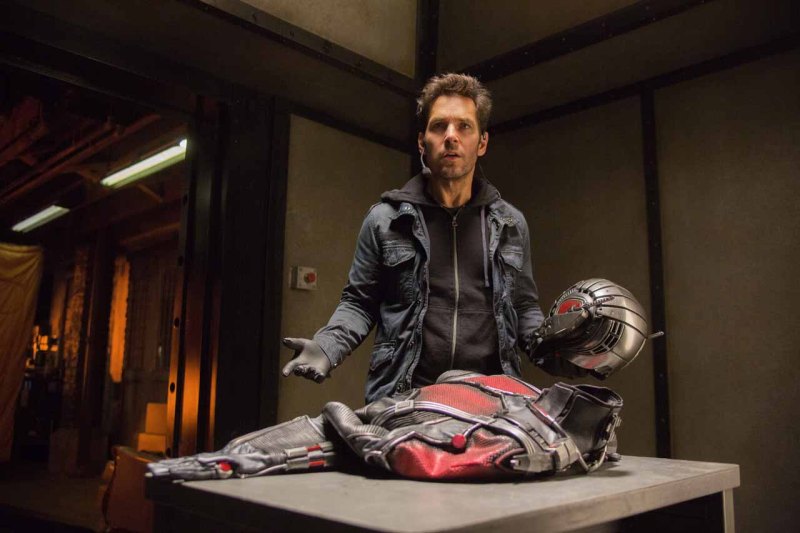 Scott Lang: “My days of breaking into places and stealing shit are over! What do you need me to do?”

Hank Pym: “…I want you to break into a place and steal some shit.”

In terms of the humour and the jokes, this was another pain point.  Whilst some jokes landed, as a whole the humour was flat.  The jokes felt rushed and forced, trying too much to be funny instead of letting the humour occur naturally.

Don’t get me wrong – there’s some clever, fun and inventive action moments in Ant-Man.  It’s certainly the main highlight and if you’re looking for something that distinguishes it from the rest of the Marvel Cinematic Universe, then this is it.  I love how everyday objects become a battlefield, reminiscent of the 80s classic, Honey, I Strunk the Kids.  Yet for some strange reason, it felt off.  The toy train scene suddenly became anti-climatic because the joke it didn’t last for long on-screen.

The experience with the humour comes down to execution and timing and when the film has gone through creative and directorial changes like Ant-Man has, it eventually shows up on-screen.  This film was obviously a big risk in concept, just like Guardians of the Galaxy but as a viewer, you want to revel in the magic and I wished the film took its time so we could enjoy the moment.

If you’re an Edgar Wright fan, you can tell where his input was before he left the project.  With his energetic and rhythmic directing skills, Wright can visually make something ordinary and mundane look exciting by placing characters in extraordinary situations. The comic book adaptation, Scott Pilgrim vs. the World is a great example, visually combining a simple love story with video game references, geek culture and sharp dialogue to reinforce the concept.  In Ant-Man, it’s Luis and his roundabout story that became the best and unique thing to happen and Michael Peña was certainly the standout.  If you watch this film, definitely watch it for his performance because it will make you laugh.

Despite my criticisms and limitations, Michael Douglas was also a good addition.  It’s great to see a screen legend take part in the Marvel Universe and as Hank Pym, he certainly grabbed my attention by being the heart of the story.

Overall, Ant-Man is an OK film.  Like I said, it’s not horribly bad because I’ve seen worse.  However it doesn’t do anything special to really set it apart from other comic book films.  In the end, it can be a bit forgettable.

Luckily Ant-Man has a better outing in Civil War, but for his first solo movie, you might be left wondering of the “what ifs” instead of what you actually got.