If you’re a child of the 80s/90s then Straight Outta Compton will bring back memories of your musical youth.  It certainly was for me.

In some ways, Straight Outta Compton is a nice surprise.  In a film world where we’ve asked for diversity to be represented, a biopic about the early beginnings of N.W.A. probably seemed like the last thing on anyone’s mind.

But guess what…it’s a good movie.

“Let me tell you what I see here: a lot of raw talent. Swagger. Bravado. People are scared of you guys. They think you’re dangerous, but the world needs to hear it.” -Jerry Heller

Just like the group itself, there’s something rebellious about Straight Outta Compton.

The film provides an uncompromising and reflective look of the harsh realities of living in Compton as seen through the eyes of Dr. Dre (Corey Hawkins), Easy-E (Jason Mitchell) and Ice Cube (O’Shea Jackson Jr.).  It paints the group as trail blazing heroes and pioneers who dared to dream, providing social commentaries by rapping about what was going on in the streets.  Police harassment and brutality, racism, gang wars and drugs never escaped their attention.  Some said their music glamorised violence but that was their world.  Gangsta rap?  More like reality rap.  They didn’t care who was against it.  Their music might not be to everyone’s taste but to them they were speaking the truth and changing perceptions.  That was their badge of honour and what made them famous.

The first half of the movie is your basic rags to riches tale.  Their individual stories, skillset and musical interests provided the perfect avenue to express their talent.  Cube wrote the lyrics, Dre as producer cut the beats and Easy rapped – not well at the beginning as demonstrated in one funny scene but soon became an essential vocal piece of the group.

Straight Outta Compton paints the group as entrepreneurial, self made artists who did it themselves.  They saw a gap in the market and watched how the crowd responded to their brand of hardcore music.  They soon became celebrities in their neighbourhoods before attracting the attention of their future manager, Jerry Heller (Paul Giamatti).

Fame and success brings a lot of things – tours, money and wild parties.  But whenever there was bad publicity such as being told not to perform Fuck Tha Police by the actual police or receiving a letter from the FBI didn’t deter them.  The bad publicity played into their strengths and increased their notoriety.  Through the crazy times, N.W.A. became more than just a group.  They were family.

The power of the film doesn’t come alive until the second half where it becomes more than just a standard, paint by the numbers biopic.  The pace changes and it elevates onto a fascinating level where it delves into the divisions and downfall of the group.

Ice Cube: [watching a crowd destroy their records] “Ain’t that some shit? Speak a little truth and people lose their minds.”

Eazy-E: “See, the truth is, they can do whatever they want with them. They bought them motherfuckers.”

It feels like a cliché that money would be the undoing of N.W.A. but the film serves as a cautionary tale for young and upcoming artists and how cut-throat the business can be if you’re not paying attention in valuing your talent.

Considering the music industry is made up of various factors, they operated by different standards and rules which affected the group in challenging ways. 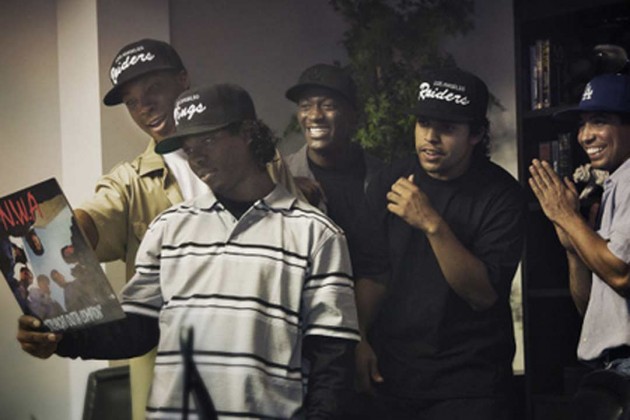 Easy-E blindly signed cheques, relying heavily on Jerry Heller’s advice in order to serve the group’s best interest.  Ice Cube wrote tracks but wasn’t given the royalties that came along with the accreditation.  This forced him to leave the group.  Dr. Dre stayed loyal but later joined Death Row Records along with Suge Knight (R. Marcos Taylor) citing similar reasons to Ice Cube.

It’s interesting to see the contrasting fortunes the leads have.  They thought the grass was greener on the other side but it led to further problems and complications.

Ice Cube went solo and had a hit album but again fell out with his manager due to money being owed and promised to him.  If that wasn’t bad enough, he was drawn into a rap battle with former members of N.W.A. about Cube leaving the group.  Ice Cube responded the best way possible – his rhymes and former manager Jerry Heller wasn’t about to escape his wrath.

Dr. Dre and Suge Knight went into partnership but there was one problem.  Dre couldn’t get out of his N.W.A. contract with Ruthless Records.  Suge Knight, clearly defined as the villain of the film, literally and brutally beats Dre’s contract release out of Easy-E.  With the uneasy tension growing between the pair and set against the backdrop of Rodney King, Dre begins to question his career decision and partnership.

As for Easy-E, he encountered financial problems which forced him to downsize.  This led to the eventual sacking of Jerry Heller, feeling he wasn’t forthright and honest with his finances.  Just when he thought he could start again, he was diagnosed with AIDS.  A month later it claimed his life in 1995.  He was thirty years old.

All the elements are skillfully balanced and at 2 hours and 27 mins for the theatrical cut, you can’t help but find yourself captivated by the drama.

The three main leads in Jason Mitchell, Corey Hawkins and O’Shea Jackson Jr. provide uncanny performances to their real life counterparts.  It’s scary in particular O’Shea Jackson Jr. who plays his real life father Ice Cube.  Some may say that his performance is not a stretch considering the close resemblance, but for his first major acting role, he captured his father’s raw intensity and attitude which brought back memories of when I used to listen to Ice Cube tracks as a kid.

But for me, it’s Jason Mitchell’s performance as Easy-E that makes this film special.  He delivers the complete performance.  He showcases Easy’s journey as more than just a rap artist or what people perceived him to be.  He shows strength when in top form and his struggles when he’s vulnerable.

But there are drawbacks in Straight Outta Compton and if you’re a fan of the group or know their history, the faults are obvious and telling.

The trouble with biopics is that it can be slanted in one direction and self serving.  You’ll always get the impression that we’re only getting half the story and Straight Outta Compton is no different.  Maybe the real truth is far too ugly for a cinema screen.

The fact that DJ Yella (Neil Brown Jr.) and MC Ren (Aldis Hodge) are relegated to sidekick status is not right, considering they were every bit instrumental to the success of N.W.A.  Both artists have had their own share of solo success but was not mentioned in the film.  Furthermore, the contribution of Arabian Prince and Warren G is also missing.

Yes it’s an N.W.A. film but it didn’t stop them showcasing the early introductions of Snoop Dogg and 2Pac when Dre was at Death Row Records.  It would have been nice to see other upcoming artists who were also influenced by the impact of N.W.A. during that time period when gangsta rap became a musical norm.  The ending does the opposite by showing how successful Dr. Dre and Ice Cube have become, in particular Dr. Dre who is more than just a producer but a business entrepreneur.  It would seem the group’s early experiences regarding management shaped them to make smarter and better choices.

However, the success of this film belongs to the main leads and their convincing portrayals.  They delivered where it matter, making Straight Outta Compton an enjoyable music biopic.

If the film’s aim was to show us how much of N.W.A’s core essence still remain in the music industry and society today, then it achieves that.