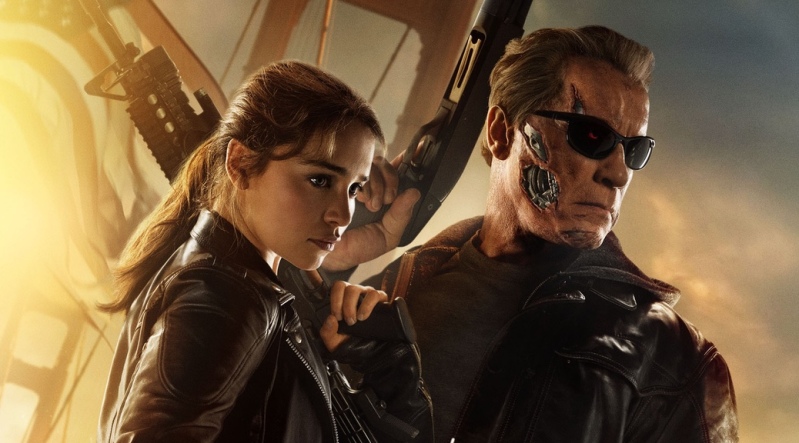 I’ve come to a logical conclusion about this franchise – it needs to be terminated.

When John Connor (Jason Clarke), leader of the human resistance sends Sgt. Kyle Reece (Jai Courtney) back to 1984 to protect his mother Sarah Connor (Emilia Clarke) and safeguard the future, an unexpected turn of events creates a fractured timeline.  Sgt. Kyle Reeces finds himself in an unfamiliar version of the past facing unlikely new allies (Arnold Schwarzenegger), dangerous new enemies and a new mission – reset the future.

Before I even begin this review, let me just run a few system commands…

I say this with a very heavy heart because I am a fan of this franchise, I kid you not.  James Cameron’s nightmarish vision of a relentless endoskeleton killing machine in The Terminator scared me as a kid.  Even the theme music would give me chills to the point where I would hide behind my cushions.  Terminator 2: Judgment Day changed the game and is one of the greatest action films ever made.  Fast forward to 2015 and behold a Terminator film that is a shameful entry to the entire franchise.  I wanted to enjoy this with an open mind.  I thought it couldn’t get any worse, but I was clearly wrong.

“Come with me if you want to live! NOW, SOLDIER!” – Sarah Connor

I will give this film one bit of praise – at least it tried to do something different.  Now that’s not to say that Terminator 3: Rise of the Machines or Terminator Salvation didn’t do the same but in hindsight it was always limited to the timeline set by T2 and tried to write around those events as if it was set in stone. 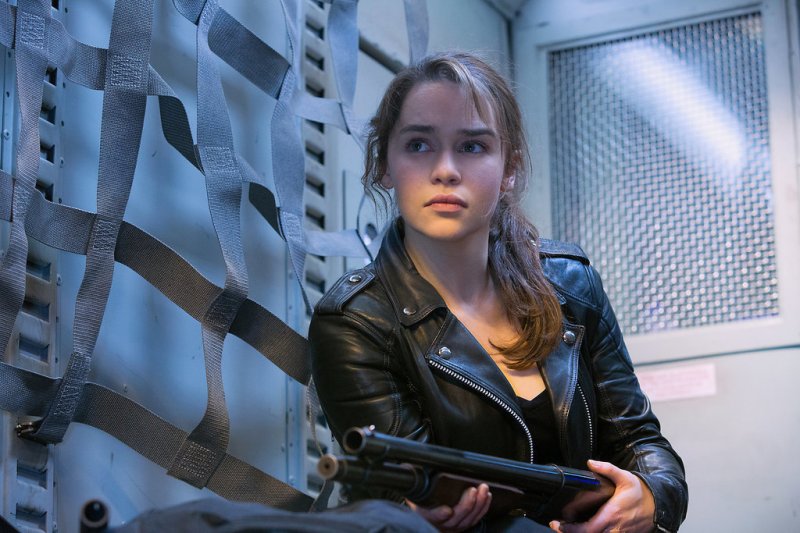 It’s almost become like a fad where Hollywood uses the idea of time travel to undo past and less favourable movies in hope to bring new life to a franchise.  This film is no exception.  In the same fashion as J.J. Abrams’ Star Trek or Bryan Singer’s X-Men: Days of Future Past where alternate timelines exist and new outcomes can occur, Terminator Genisys follows along that same path.  It reboots the entire concept from the events set back in 1984.  I don’t have a problem with that, in fact it’s a brave concept if done right.  But trust me, THIS FILM IS NOT STAR TREK OR X-MEN: DAYS OF FUTURE PAST!  In fact I can’t even put it in the same league as those two films I mentioned because Terminator Genisys is a terrible film.

The Terminator timeline of events is not perfect to begin with but this rebooted timeline is handled so clumsily that you’ll end up (like me) nitpicking your way through the entire storyline.  The longer the film went on, the more convoluted it became.  The film constantly questions itself (and the franchise history) in a confused and deranged manner that it loses the plot, the point and any kind of coherent structure.  I’m not scientist and I’m not going to pretend that I know all the detailed physics and mechanics of making time travel possible, but there are ENOUGH time paradoxes and inconsistencies in this film that would make your [bleeping] head hurt.

For example,  the cop/T-1000 (Byung-Hun Lee) is a contradiction to the T-1000 introduced in T2 by Robert Patrick.  It was able to track down Sarah Connor, Kyle Reece and Pops/Guardian terminator with such ease – a part of his construct is a tracker.  I don’t want to be flippant in my point but correct me if I’m wrong.  Young John Connor removed a piece of the T-1000 when they escaped from the mental hospital where Sarah was located.  Granted that could have been a tracker but the terminator is made out of liquid metal which can form stabbing weapons.  It can shapeshift into other people and mimic their voice in order to exploit their emotions as a tool to get to his targets.  T2 doesn’t mention the T-1000 having tracking capabilities in its DNA makeup, therefore as advanced as it is, it still operates like a normal killing machine.  It seeks, locates and destroys by any means necessary by logically going through their system protocols.  Otherwise if it did have tracking capabilities then Robert Patrick’s T-1000 could have played smart and gone to the desert hideout where the gang were equipping themselves with guns instead of playing the waiting game by listening to a police radio report to determine their location. 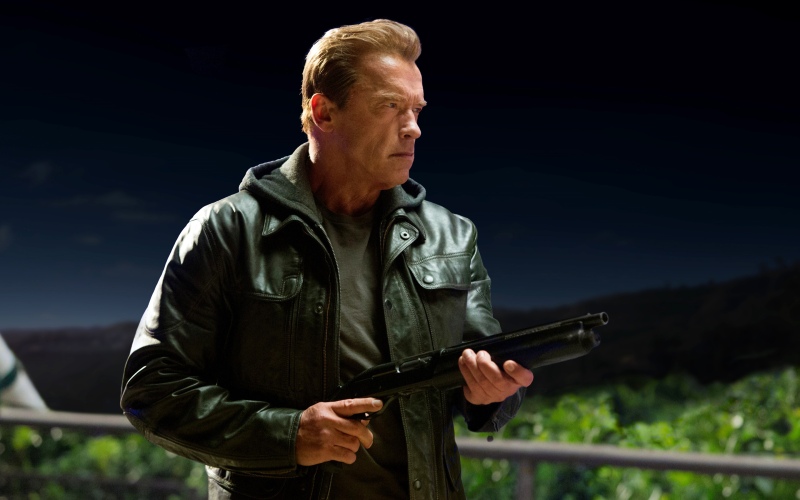 Who sent the first terminator back to rescue Sarah Connor as a child?  Did Skynet have infiltrating terminators at that point in the timeline when Kyle Reece was a young child and rescued by future John Connor?  How did Pops/Guardian Terminator know the exact location of where Sarah and Kyle would time jump to?  Is Skynet some misunderstood child program now?  Does falling into a pool of liquid metal upgrade a terminator – a machine full of complex moving parts?  Oh how about if Kyle and Sarah didn’t consummate their love back in 1984, how the [bleep] is future John Connor STILL EXISTING to become what those clever [bleeping] trailers spoiled?

To add insult to injury you have to put up with the most dumbed down pseudo-science dialogue, cheap and unfunny jokes (Cops theme song) and cartoonish CGI effects (the helicopter chase).  Characters would state the [bleeping] obvious as if the audience are too stupid to guess what’s going on.  The whole plotting of events feels more like a nod and a wink to the past films like some greatest hits archive stitched together in hope that it all makes sense.  Well you didn’t fool me!

But the biggest aesthetic killer of Terminator Genisys is that it feels too clean and polished, especially the future war scenes.  Characters are clean shaven and pretty which contradicts what James Cameron set before.  He captured the imagination of a grim future filled with skull and bones from the dead, a deserted and desaturated wasteland in the aftermath of a nuclear strike and a seemingly unstoppable force of endoskeleton terminators and sentient machines marching and raging war against humanity.  When John Connor and his army broke into Skynet’s base of operations in Genisys, it felt so simplistic that they probably had time to order a kebab!

The film lacks any kind of genuine grit, surprise, tension and suspense to keep you remotely interested or at least fearing what these terminators could do.  That’s what the first two Terminator films had in abundance and Terminator Genisys is the neutered version.

When you watch a Terminator film and Arnold Schwarzenegger is the least of the film’s problems, you kinda know where I’m getting at. 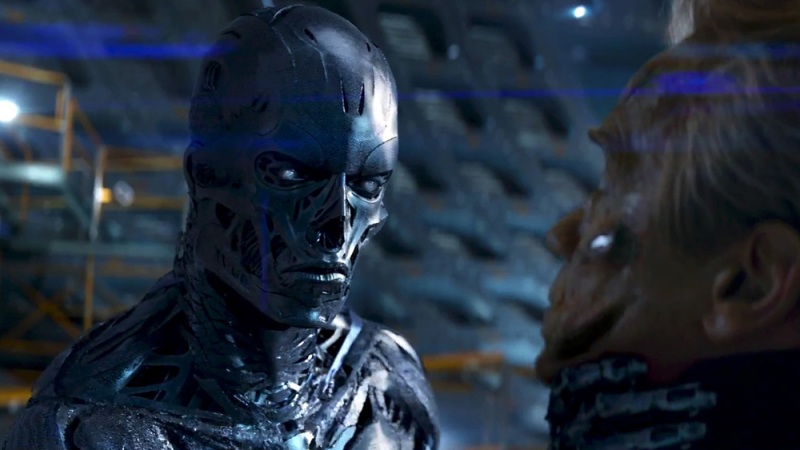 “I look at each of you and I see the marks of this long and terrible war. If we die tonight, mankind dies with us.” – John Connor

Speaking of Arnold, he’s the only one who can hold his head up high.  Why?  Because he was doing what I expected him to do.  He could practically sleep walk through this film and still be better than what was presented.  He didn’t have to do much but his responses and his robot humour felt genuine instead of something jokey like wearing the wrong sunglasses or the “talk to the hand” joke from Terminator 3: Rise of the Machines.

Jason Clarke and Emilia Clarke (no relation) give decent performances as John Connor and Sarah Connor but the script lacked depth and didn’t allow them to really take hold of those iconic characters.  They looked the part but lacked the necessary conviction to be believable.

But the BIGGEST criminal in Terminator Genisys belongs to Jai Courtney as Kyle Reece.

Remember what you loved about Kyle Reece in The Terminator, played by the awesome Michael Biehn?  I loved the David vs. Goliath battle between Kyle Reece and the T-800.  I loved that Kyle Reece looked like a slender, ordinary guy like Bruce Willis was in Die Hard versus a complete beast that was Mr. Schwarzenegger as the Terminator.  I loved how he was a no nonsense, hard-edge and resourceful, doing what was necessary to save Sarah Connor’s life.  I loved the psychologically tortured soul aspect of his character, battle scarred and constantly reminded of the future war through his nightmares.

Well hold unto your seats folks because Terminator Genisys destroys all that. 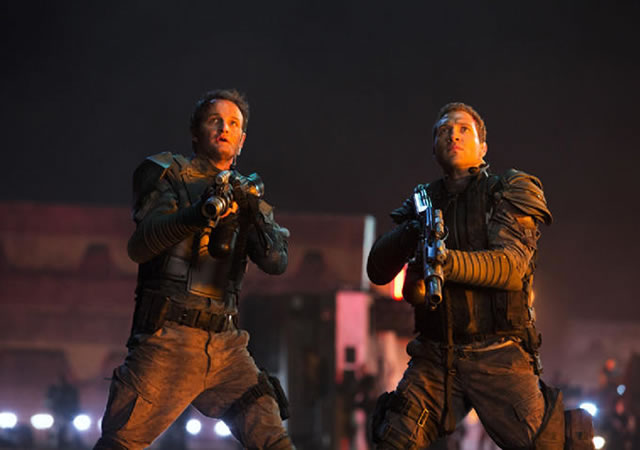 That nuance Kyle Reece that you love has gone and has been replaced with a whiny, [bleeping], chisel-jawed, son of a [bleep] soldier who throws a hissy fit and has no idea what the [bleep] is going on!  Now maybe I’m a bit harsh because the timeline has changed, his fate and role in the future is revealed to him and Sarah is now a badass etc.  But it’s inexcusable what that script did or how the performance was depicted on screen.  Not once did I see Kyle Reece showcasing any kind resourcefulness or military expertise, considering he’s a trained soldier and has been fighting alongside future John Connor for years.  He can somehow tell that Arnold’s character was a terminator from ONE LOOK in the van as if he’s seen him before when the original Kyle Reece couldn’t tell until the machine made a move on vulnerable Sarah in the nightclub scene in the original film!  At times he seemed more interested in “sizing” up Arnold’s terminator, embodying a cocky persona with smart ass comments and looking to score with Sarah.  In fact his relationship with Sarah Connor was more rom-com instead of something personal and insightful.  His character remembering an alternative timeline from 2017 is confusing and convenient and the film doesn’t even bother to explain that logic.  He’s even the wrong physique for [bleep] sake!

For an event so devastating like Judgment Day, his opening monologue was so dull that nothing about it draws you into his world and his experience.  You might as well beg Skynet to go back in time and terminate Kyle Reece instead!  In fact why didn’t they since they turned John Connor into a terminator, therefore knowing what he knows about the future? 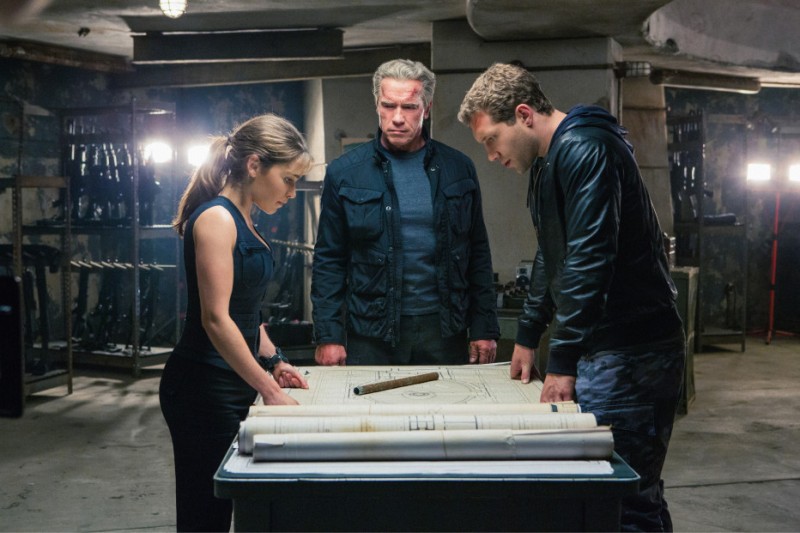 The sad realisation is that Terminator ended for me after T2.  None of these films whether it’s Rise of the Machines, Salvation or Genisys comes even close to the accomplishments of Cameron’s work.  I understand that it’s always going to be a tough task to follow in the footsteps of two brilliant films but it doesn’t have to be rocket science.  Everytime there’s a Terminator film it always goes in the wrong direction and each iteration slowly kills the franchise – this one being the worst offender.

Terminator has departed from it’s B-movie, hardcore action and smart logic roots to a commercialise, dumbed down, PG/12 certificate, comedic parody to draw in a mass audience.

The only thing that has come close to Cameron’s work on Terminator doesn’t belong in the film world.  You have to look to the TV world – Terminator: The Sarah Connor Chronicles.  This short lived series (even today I’m still mad about it’s cancellation) had heart, story and believable characters.  It had enough respect for Cameron’s original work and yet developed something new.  But the most important thing is that it didn’t talk down to its audience.  It was smart and intelligent enough to constantly ask the question about technology and its influence and the role that Skynet plays.  It even had a time jump concept and yet that was far more engaging than in Genisys.

They can say that the franchise is “on-hold” or “re-adjusting” but honestly it has lost its heart and unless James Cameron comes out from his underwater Avatar experiment to take back ownership of his franchise, we’re going to continue to get Terminator films like this.

In the words of Sarah Connor…