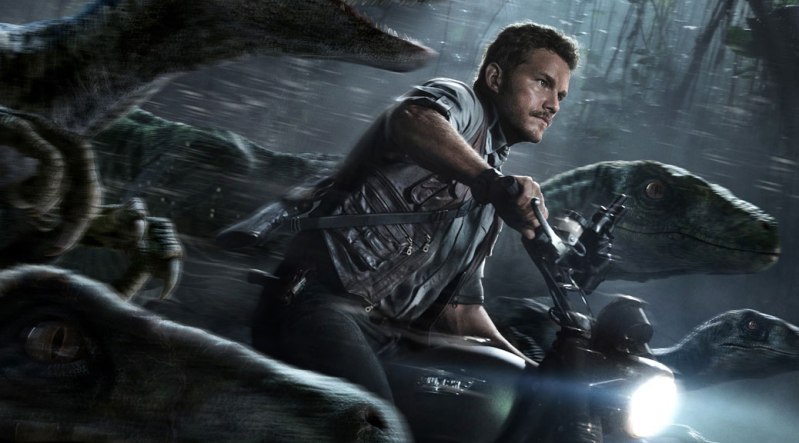 Summer may have come and gone but the reviews doesn’t stop.  Today I review Jurassic World.

So is the film “raptor-ous” or does it fall short in the same way as its sequel predecessors?

Set 22 years after the original Spielberg classic, a new theme park is built on the original site of Jurassic Park.  Business is booming, that is until the park’s newest attraction escapes containment and goes on a killing spree.

It’s natural to feel sceptical when it comes to another Jurassic Park movie.  Whilst The Lost World and Jurassic Park 3 had their moments, they’ve missed the mark, failing to live up to the original.  Of course it’s not easy but what sets Spielberg’s original apart from the rest is that sense of magic and wonder.  The beautiful mixed in with the terror which frightened kids (like myself) who watched it in the cinemas back in 1993.  Whilst Jurassic World has its problems (which I will highlight), it’s certainly an improvement on the past two films.

“We have learned more in the past year from genetics, than a century of digging up bones! A whole new frontier has opened up! We have our first genetically modified hybrid!” – Claire

Jurassic World is dumb…so dumb.  There I said it!  The makers of Honest Trailers will have a field day!  But it’s a good dumb movie where you can set your expectations at a decent, moderate level and won’t feel like you’ve been cheated.

The first hurdle that you as the audience has to deal with is the concept itself.  As mentioned in the synopsis, this film is set 22 years after the original and John Hammond (the late, great Sir Richard Attenborough) has got his wish.  His creation of bringing an extinct past into the present future has come to fruition for a new generation.  Jurassic Park has been turned into a modern day Disneyland!

Whilst it’s a reality on screen, Jurassic World constantly flirts with the idea of how cool it would be to see dinosaurs in their prime – if ever a place truly existed.  No matter what theme park you’ve been to (either as a kid or as an adult), there’s always a sense of escapism, ditching the 9 to 5 and transported (for a couple of hours) into another world.

The film certainly pays tribute to the original in terms of Hammond’s dream.  Not only is the park an adventure and a great source of entertainment (with SeaWorld style exhibits for example), it’s also a source of learning and education.  It would make an awesome school trip!  When the park is run well, it looks like a fantastic experience.

But…it wouldn’t be a movie if everything ran perfectly now would it?

Now we’ve all seen the trailer and my honest reaction was not positive.  It’s not because there was another Jurassic Park movie but the overall nagging feeling of “when will they ever learn?”

The term “if you forget your past, you’re doomed to repeat it” rings true in Jurassic World…in fact it screams it.  So how come the necessary safety precautions (considering the island’s past) weren’t followed?  If Jurassic Park showed you how easy it is for something to go wrong, then the people of Jurassic World clearly didn’t take that advice.

This behaviour all boils down to their corporate, arrogant attitude.  Claire (Bryce Dallas Howard) aka the WORST AUNT EVER boasts about learning more from genetics than from digging bones in the ground.  With modern day advancements in technology, InGen can make designer dinosaurs that are bigger, smarter and scarier.  So proud of their achievements, Dr. Henry Wu (BD Wong who reprises his role from the original) walks around with a black turtleneck like some Steve Jobs imitator boasting how great they are.  All he needs is the Jonathan Ive soundboard and he’s all set!  Money is clearly no object for helicopter pilot enthusiast and benefactor Musrani (Iffran Khan).  As long as the park is making a profit, who cares what the risks are because they can do whatever they want, especially with the latest attraction, the Indominus Rex.

Jurassic World subtly questions the morality of playing God, a fact that is present in the early parts of the film.  However, once the story hit its stride, it’s handled in a clumsy, idiotic way that will leave you shaking your head and seriously question how the hell this park passed any kind of health and safety procedures.  The InGen scientists created a genetic hybrid dinosaur that can hide and camouflage itself, lower it’s body temperature, rip out it’s tracker and can kill without thinking twice…without any kind of proper fail safe to stop it, in case it was beyond their control.  If there was a fail safe they were more concerned about protecting their million dollar prized asset.  Once again, humanity gets screwed and at this point you might as well give a raptor a gun.

So obviously when the [bleep] hits the fan and the Indominus Rex escapes in clever fashion, everything that follows is laughable.

Ineffective weaponry, gyrospheres that can manually veer off course without any kind of system override to call it back when the ride was closed, raptors that can communicate with the I-Rex, wild birds escaping from their cages flying off to god knows where (is there a plan to catch them all before they fly south for the winter?) to the absolute absurdity that by the end of the film, visitors were still on the island, waiting for one ferry boat!  I guess the only smart thing about the whole incident was that one guy who managed to grab his cocktail drinks before running away from danger.  The final battle towards the end – if dinosaurs could give themselves a high five then I guess that explains what that was.

Owen: “You made a genetic hybrid. Raised it in captivity. She is seeing all of this for the first time. She does not even know what she is. She will kill everything that moves.”

Masrani: “You think the animal is contemplating its own existence?”

Owen: “She is learning where she fits on the food chain and I’m not sure you want her to figure that out.”

The problem with Jurassic World is that all the characters are basic and stereotypical.  Owen (Chris Pratt) aka The Raptor Whisperer is the traditional hero.  Claire (who somehow survives running around in HIGH HEELS for the entire film) is a person who likes order and control.  Dr. Henry Wu…well you need some foreigner to blame this dinosaur mess on despite everyone else being culpable as he is.  Hoskins (Vincent D’Onofrio) wants to use the dinosaurs as the next weapons of mass destruction etc.

Because they’re stereotypical, with exception of Chris Pratt, all the characters serve a purpose.  You try to take these characters seriously but in the end because of their lack of development, it was hard to care about them.  There’s nothing likeable about them.  The case example are the two kids – Zach (Nick Robinson) and Gray (Ty Simpkins).

The story starts off with them, heading off to spend time with their Aunt Claire during the Christmas holidays (by the way, once the kids are on the island, there is no further mention of the holiday season or decorations).  Their experience is clearly there to juxtapose against all the other drama going on in the park by providing a sense of wonder, nostalgia and danger.  But their story didn’t do anything for me.  It felt forced.

That brings up another issue – there’s a reason why Spielberg’s original holds up well and will last the test of time.  His film made you believe that dinosaurs could come back to life from an extinct past.  With the right ambition and magic, anything was possible and wasn’t afraid to delve into the science.  But crucially, he also reminded you of the dangers.  It didn’t matter whether that exploration was from the dinosaurs themselves or personal greed made by other people.  Whether it was a scene of getting the systems back online or the first appearance of the awesome T-Rex, a tone was set and there was fear and tension in every encounter.

Sadly Jurassic World misses that mark.  The tone becomes unintentionally comical.  Did I feel the characters were in peril? Not really.  Is the film CG overload? Yes and can ruin the believability of what was going on in certain scenes.  But honestly, the film recycles what you appreciate and love about the original and creates a laughable homage when in reality they should have done something entirely unique.

Yet despite my negativity, Jurassic World is a fun movie!  It feels wrong right?  It’s strange for me to say it but I’m serious – it is entertaining and action packed.

Once that John Williams theme music kicks in, all sense of scepticism melts away.  A bit like an actual theme park ride, you’re in it for the pure escapism.  You might even feel a bit teary eyed (please don’t judge me).

Whilst it will never touch the greatness of the original and shamelessly predictable, Jurassic World is a positive entry in the franchise.  Jurassic World has a dinosaur that at least matches the threat and expectations.  The dinosaurs are the stars of the show – just don’t think too much about what the humans are doing!

In the meantime, I’m going to hang out at the Natural History Musuem…least the dinosaurs in there can’t hurt you…