I had the absolute pleasure of watching Selma recently and believe that it’s the most socially relevant film of 2015.

“Our lives are not fully lived if we’re not willing to die for those we love, for what we believe.” – Martin Luther King, Jr.

Starring David Oyelowo as the iconic civil rights leader, Selma tells the story of Martin Luther King’s campaign to secure equal voting rights via an epic march from Selma to Montgomery, Alabama in 1965.

For somebody who’s constantly part of our history education, his continued cultural impact, to the clear examination of his methods and practices, sometimes you have to wonder what took so long for Hollywood to make a film about Martin Luther King.

Better later than never.  I’m glad Selma came along because it is one of the best movies of this year.

Biopics these days can be a little formulaic, documenting the character from their early beginnings up to their final, defining moments.  Obviously there’s nothing wrong with that way of storytelling but more times than often, the story can feel too broad, often missing key bits of information and history.  Director Ava DuVernay doesn’t make a standard, generic biopic that spans years of King’s life.  Selma takes a specific and pivotal look at a key time of the civil rights movement.   Its intense focus makes the film powerful and engaging.

It would be so easy to create a film where it depicts Martin Luther King as some sort of “black superhero”.  Whenever there’s trouble, he rips off the suit to reveal the S on his chest.  He flies into the danger zone to unleash his fury of his powers to end segregation and fight injustice.  But DuVernay’s direction and Oyelowo’s brilliant performance paints a different and refreshingly simple picture – King was a human being.

There’s a bravery with Selma.  Whilst it highlights everything that we recognise about King (a great orator, an inspiration, promoting peace over violence) it’s not afraid to depict King with his negative attributes.

When we first encounter King with his wife, there’s a sense of love but it feels distant and disconnected.  Coretta Scott King (Carmen Ejogo) is no fool and has to take on the emotional burden of the movement.  She’s very much aware of King’s infidelities and affairs.  King doesn’t do himself any favours with his long, drawn out silent responses.

By all means, King was not a saint or perfect.  He is as culpable and guilty as most people when they give into temptations.  However, the careful balance of the film doesn’t take away the achievements that King is rightly recognised for.  It simply humanises him, recognising his flaws whilst examining the constant pressures he faced during extremely difficult circumstances.  He had his doubts, his frustrations, his crisis of confidence and questionable decision making.  He didn’t have it his own way most of the time.  Everything was a constant battle between a political fight between himself and President Johnson (Tom Wilkinson) to facing criticism from black leaders in Selma who had their own fighting cause for the vote.

There’s an aura of emotional sadness that surrounds Martin Luther King.  King was a marked and watched man.  DuVernay constantly makes that point with FBI surveillance reports appearing on screen during a scene transition.  It’s well documented that the FBI would tap his phones and his hotel rooms, listening to his conversations.  His phone would ring spreading hateful and derogatory messages about himself, his movement and the threat towards his family.  Even J. Edgar Hoover (Dylan Baker), the director of the FBI despised King.  He even subtly suggest that King can be dealt with – permanently.  Sometimes you have to wonder what was running through King’s mind at that time.  While we will never know personally to ask him, Oyelowo’s performance captures that essence.  For every moment of defiance and strength, there’s an acceptance, almost resigning to his fate.  The ominous feeling of death was in the air and it was only a matter of time.

“It is unacceptable that they use their power to keep us voiceless.” – Martin Luther King, Jr.

What really drives Selma into a class of its own is that examination of King’s ideology and the essence of non-violence.  King knew how to play the game.  His movement was strategic and calculated.  Protests were not enough, especially when his movement was labelled in the same bracket as Malcolm X’s more militant take on civil rights.  By exerting political pressure and using the media, King gained the maximum attention to their cause.  It brought the issue right into the homes of every American who had a TV.  The damning pictures of police brutality against innocent and non-violent African-American people only exposed the hypocrisy within the country.  It united not only black people but people of different races and faiths in joining the cause.  This tactic may have felt new back then but fast forward to 2015 and the situation is no different with people posting videos captured on their mobile phones to social media outlets to highlight an injustice.

Just like 12 Years a Slave, Selma doesn’t shy away from difficult moments.  It shows the violence for what it is – uncomfortable, heartbreaking and brutal.  I had tears in my eyes, especially when Jimmie Lee Jackson was murdered.  The church bombing at the beginning of the film is another case example.  One minute the girls were innocently chatting away about hair, next minute their young lives instantly gone.  Just goes to show how precious life can be and how life can be over in a split second.

You go through the emotions with Selma and it sheds new light on the civil rights movement.  Not everything was clear cut as black vs. white.  Just by association with the civil rights movement made you a target which affected everybody.  When King’s friend and priest was beaten to death, the film goes beyond making a point about racism and extreme bigotry during the darkest moments of American history.  It questions the dignity and humanity of people.  We may fear what we don’t understand but we all bleed the same colour.  Seeing people act out on their ignorance, filled with fierce hatred and barbaric violence is sad.  Yet this was the battle they faced in Selma, Alabama and Selma paints that realistic and uncompromising picture.  Despite the anger, the loss of lives and the lack of accountability and justice, the non-violent protest continued in the faith that change will happen.

The film has been criticised for its historical accuracy but that is beside the point.  It’s not uncommon for films to play around with facts to justify their goals for the story.  Does the accuracy affect the overall nature of Selma?  Not at all and certainly not in the same way I had issues with The Imitation Game where the Nazi code breaking was solely placed on Alan Turing when there was more of a collective and collaborative effort (e.g the Polish broke enigma first which was left out of the film entirely).

President Johnson may have been depicted as being reluctant to give the movement its full support (because of his own political priorities) but the film highlights that he was slow to react.  For all his posturing and trying to manage the escalating situation, he caved under the overwhelming pressure.  King was a catalyst for that, exposing the hypocritical thinking behind the administration’s policies and priorities.  Is it justifiable to send people overseas to fight in Vietnam when people were dying in the streets?  Historically accurate or not, Selma does not take away the actual importance of what this film is about.  African-Americans could not vote, something we consider today as a fundamental democratic right.  When they tried to follow the system, they instantly faced obstacles and opposition – their intelligence questioned and labelled as troublemakers.  This is highlighted in one key scene where Annie Lee Cooper (Oprah Winfrey) is asked to name all 67 county judges in Alabama.  Her voting application is denied because she couldn’t name one.

As a young generation black female, sometimes it can be hard to fathom what African-Americans went through during Selma and the civil rights movement as a whole.  While there has been progress it’s hard not to see the parallels right now.  I call Selma “socially relevant” because the struggles still exists.  I don’t have to list them but you only have to turn on your TV to see the questionable injustice of young lives lost and the zero accountability and responsibility from those who are suppose to “protect and serve,” especially when the evidence is more visible in the form of mobile phones and dashboard cameras. 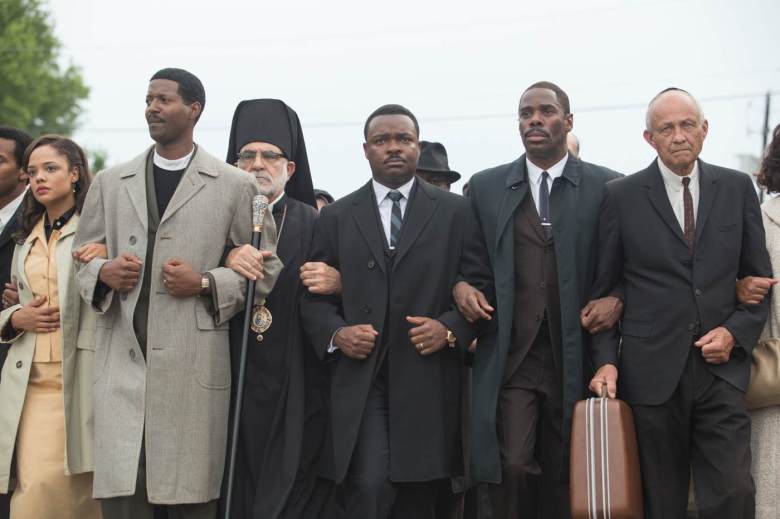 Just like in my review of 12 Years a Slave my point still remains the same – the issues cannot be ignored.  Selma should be used as an education, through our history books to our friends.  It’s a lesson we should never forget in order to apply and change the future.

It’s a real shame that Selma was not given the Oscar recognition it deserved.  However the Oscars and its lack of diversity, not just on race but on gender and type of films being nominated entirely begs another and separate discussion on its own.

David Oyelowo’s performance is outstanding with an almost uncanny performance as Dr. King.  Just like Dr. King himself, when you watch David Oyelowo, you listen and crucially you believe in every word he says, especially in scenes where King is delivering a speech.  DuVernay’s direction keeps the film’s message in perspective whilst carefully balancing the different issues that led up to the march.  She identifies King as a human being doing extraordinary things, aided by the power and support of his loyal friends and the strong female characters within the movement.

Selma is worthy of my highest recommendation.  Hopefully like me, you’ll clap once the end credits roll.