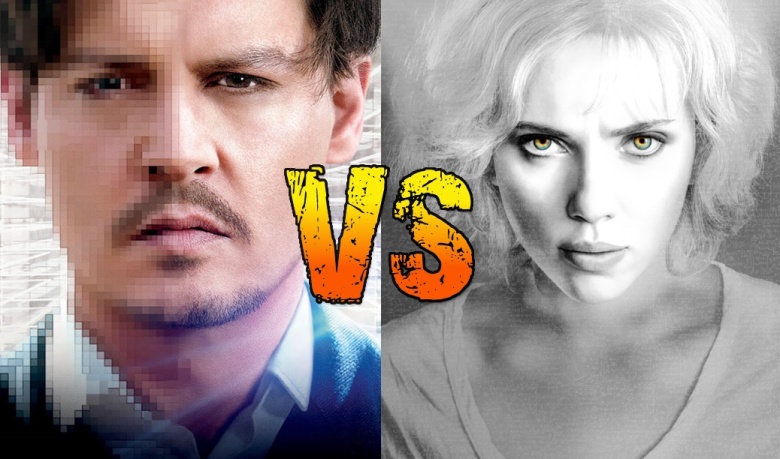 Welcome again to another movie showdown event and this time I’ve gone all sci-fi. In 2014, two films were released dealing with the evolution of the human consciousness.  Who will win – it’s Depp vs. Johansson.

Let’s get ready to rumble!

“For 130,000 years, our capacity to reason has remained unchanged. The combined intellect of the neuroscientists, mathematicians and… hackers… in this auditoirum pales in comparison to the most basic A.I. Once online, a sentient machine will quickly overcome the limits of biology. And in a short time, its analytic power will become greater than the collective intelligence of every person born in the history of the world. So imagine such an entity with a full range of human emotion. Even self-awareness. Some scientists refer to this as “the Singularity.” I call it “Transcendence.” – Will Caster (Transcendence)

I have to admit – I watched this film with some trepidation.  It’s not easy pressing play on a movie knowing how much negativity surrounds it. 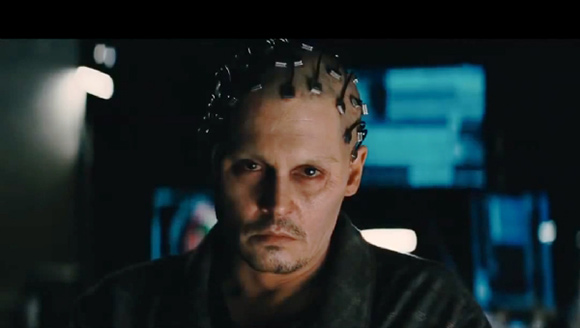 Transcendence is not a bad movie and it’s certainly not the worst movie I’ve seen.  I did find the film thought provoking, providing interesting ideas and concepts about how humanity could further their potential by becoming more than what we already are.  The problem (like all high brow sci-fi films that aims to educate and explore) is trying to find that balance that ties the entire concept together and I couldn’t help but feel like this film wasted a good opportunity to achieve that.

Transcendence was like watching a film about the creation of Skynet but without much justification.  The whole film plays up to our fears of technology, that somehow it will turn against us and destroy what we hold dear and value. It’s a classic sci-fi trope – the idea of playing God, creating technology that was suppose to serve altruistic purposes but then becomes unrecognisable and dangerous.  I guess the unique feature about Transcendence that for once, the artificial intelligence aka Dr. Will Caster (Johnny Depp) does have an actual desire for good, to make the world a better place and it’s our own ignorance and fear that stops a computer utopia from happening.  We fear what we don’t understand, the movie claims.  I mean how else do you explain an A.I. computer who infects the world, we fear-mongering people destroy it and then in return as a gift, it leads us back to the dark ages?

Despite the good ideas, the plot does feel inconsistent.  It has so many far-fetched ideas but never manages to coherently grasp them.  A part of me wanted the film to explore the idea whether one man should have that infinite amount of power to change the world and yet the film speedily rushes through the plot points. In the end you’re left with underdeveloped ideas and unexplored characters that do things as a matter of convenience.

R.I.F.T. the anti-technology extremist group led by Bree (Kate Mara) have deep concerns about Will’s work.  But their views are never explored and you instantly feel that they’re just a bunch of paranoid troublemakers.  Their cause is never justified and you feel more annoyance than sympathy as they end up aiding the government to stop Will’s A.I. program – oh the irony.  Evelyn (Rebecca Hall), Will’s wife tries this radical experiment to save her husband’s life by uploading his consciousness to an A.I. sentient program they’ve been working on.  The procedure works but the lack of due diligence in questioning whether it’s really her husband’s consciousness speaking to her or the A.I. playing games are never elaborated.  I know she desperately wants to hold unto her husband as long as possible and her support and devotion are unwavering.  However, there are genuine moments where she comes across as stupid and naïve.  She just falls for the idea, moves to a random location in the desert and with loads of money is able to invest in a highly sophisticated lab where A.I. Will is able to gain more power to continue his work – and that includes healing the local town’s people by turning them into super soldiers, powered by nanotechnology to protect their little paradise.  We instantly accept A.I. Will’s thirst for power and what he needs but there’s never an explanation on how it’s doing it.  None of the characters delve into the program and its nature.  We automatically assume that Will must be really smart to do what he’s doing and it’s our fear and mistrust of the system that makes us suspicious.  Or how about the ease to create a virus to take down A.I. Will by Max (Paul Bettany) who has been in a cave for two years since Will went online and infected the planet.  Surely a supercomputer A.I that has gone beyond what it was originally intended would protect itself?  Or better yet, for a supercomputer virus to be evolving as it became self-aware, how did Max know his old code (a code he helped to write) would even work?

You can tell that Wally Pfister was inspired by his collaboration work with Christopher Nolan.  Aesthetically, the movie looks great with every shot staged well.  But there is sense of frustration with Transcendence.

It was nice to see Johnny Depp in something normal without going into eccentric character mode like a Captain Jack Sparrow.  His voice is perfect for something that is both human and out of this world computer.  Depp playing a detached character is fine (he’s playing a computer after all), however I think the film suffers because there’s a detachment with the other characters.  Some characters felt distant therefore I couldn’t connect with them.  Their justification for their motives were at times simplistic and clichéd and never moved from the basic level, especially the characters that were against Will’s A.I. program. For a sci-fi film to work, that connection between the characters and the audience are essential, no matter how far fetch the plot is.  We’re sold on the idea if the characters (good or bad) believe it because the audience is always searching for recognisable features.  Otherwise what is the point of watching a film in the first place?  The only time I did feel something was when Will’s power allowed him to regenerate into a walking/talking human being again to be reunited with his wife.

It’s a bit of a shame seeing a film with potential not quite reaching a level of expectation that it promises with it’s deep thinking concepts and solid cast assembly.  Maybe if the film was just about Will and Evelyn and left out the “technology is bad” mantra it probably would have gotten the focus it needed instead of trying to tell multiple stories that went nowhere.  In the end that’s what this film turned into – it abandons the idea of humanity vs. technology and self-awareness for sacrificing everything for love.

Transcendence is decent when you suspend your disbelief and your expectations are adjusted suitably.  By all means it is not a terrible watch and you can see the ambition, but you do feel disappointed at what this film could have been.

“Life was given to us a billion years ago. What have we done with it?” – Lucy (Lucy)

You get the picture right?

Credit to the film but at least you know what you’re expecting.  It starts off well as it intersects Lucy (Scarlett Johansson) and her tale of being caught up in the wrong place/wrong time in a drug deal and Professor Norman (Morgan Freeman) giving a speech  to students and researchers about the acceleration of the human brain.  Then it falls into what action movies normally do and actually suffers in the same way Transcendence does – great idea, poor execution.

Everything about this film is silly no matter how much Professor Norman tries to explain the facts about using only 10% of your brain.  Lucy comes across as a film that is part Leon, part The Fifth Element, part Nikita.  It wants to sound smart and intelligent but you know it will come a point where it will unhinge and self-destruct.  I mean what is the point of a character going on a revenge bender for the ordeal she goes through if she doesn’t actually take out the leader responsible for it?  I don’t have to use 0.01% of my brain to know that the bad guy will eventually rise up and try to take you out. 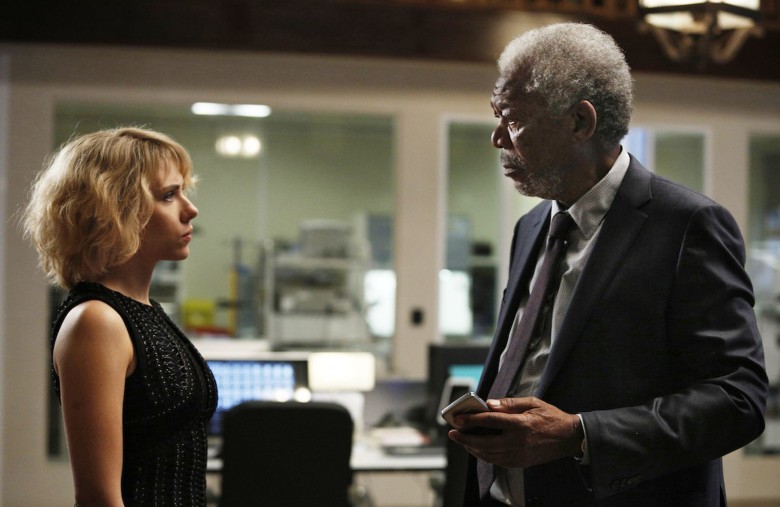 Lucy is pretty much the female version of Limitless but you never quite get the feeling that the film fully utilises her powers.  It’s a catch 22 situation.  After absorbing the drug into her system, Lucy quickly understands that she’s dying whilst periodically her brain capacity increases.  With this time limit hanging over the film, we don’t get to witness for long of her experiencing a higher functioning brainpower.  We don’t get to comprehend how this mysterious black market drug is able to unlock the human brain at a phenomenal rate.  Just like Transcendence, you have to quickly accept these aspects without questioning it.  At least Limitless dwells and explores on those aspects, not only making the lead character a “better functioning” person but is able to manufacture the substance so that he’ll never run out.  Lucy doesn’t even know what it wants to stand for – one minute she has God like powers and can do absolutely anything and in the end she turns herself into a USB stick so that the knowledge of the universe and mankind can be passed down to Professor Norman for analysis and study.  You can see why I laughed – hard.

Despite the limitations, at least Johansson and Freeman shine.  It’s not hard for them to do but at least they were the positives from a brainless film.

My sanity and the real world.  Not a good enough answer?

Ok, it’s Transcendence – both films are as bad as each other.  However the saving grace with Transcendence is its attempt to explore the themes it tried to convey but it could have been better than what we got.