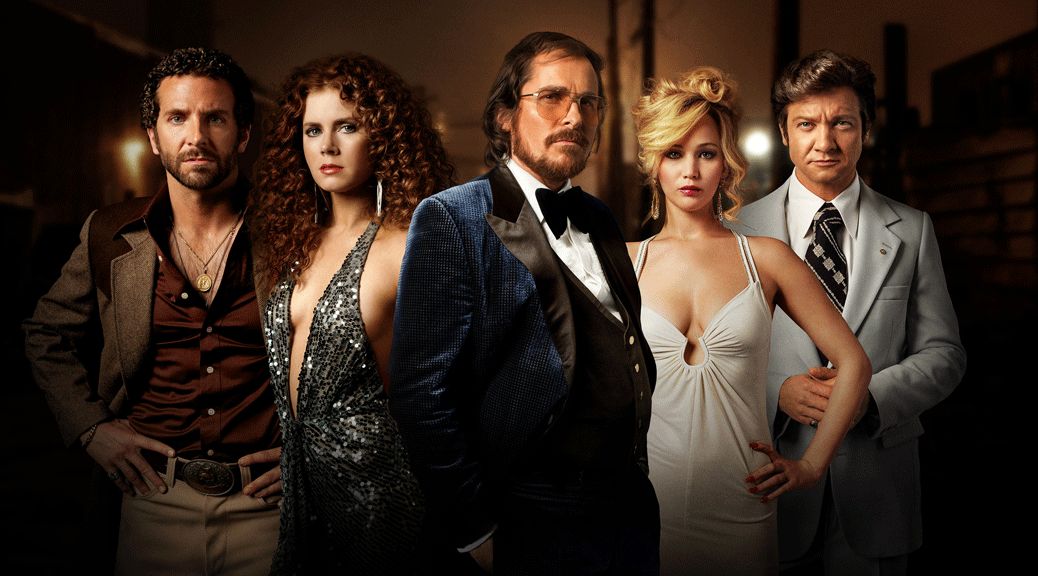 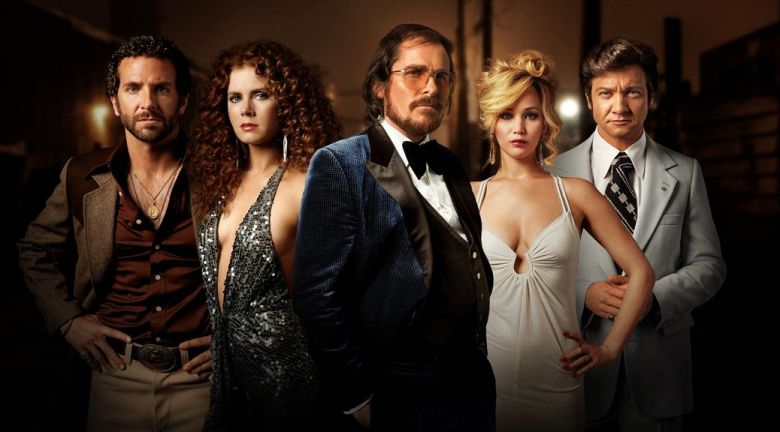 On the surface, American Hustle has all the ingredients of a near perfect movie. However as the end credits rolled, I could only bring myself to liking the film instead of absolutely loving it.

Irving Rosenfeld (Christian Bale) and Sydney Prosser (Amy Adams) are con artists. They are both in love and live in the moment of their successful partnership. However the conning game doesn’t last long as a federal agent, Richie DiMaso (Bradley Cooper), apprehends them during one of their scams. In a bid to avoid a significant jail term, they agree to bust and take down “corrupt” politicians, in particular Mayor Carmine Polito (Jeremy Renner). However when complications arise such as the mafia’s involvement and Irving wife, Roselyn (Jennifer Lawrence), the gang realise they need more than hustle to survive the game they’re playing.

Richie DiMaso: “You got any other questions?”

Paco Hernandez: “Yeah, I think the name of this operation is offensive. This whole thing is racist. What, Abscam? “Arab-scam”? It’s racist!”

Irving Rosenfeld: “Are you fucking kidding? What do you care? You’re Mexican.”

There’s something strangely familiar with American Hustle which I sure everyone has pointed out. Watching this is like watching a Martin Scorsese film. It’s hard to bypass the traits – the voiceover narration, the oddball characters with their wise guy talking, the attention to detail with production and a wicked soundtrack etc. Yet about ten minutes in you realise that you’re not watching a Scorsese film. It was just an illusion, like a fan made tribute to the director himself.

Unlike a Scorsese film where he always went back to the point of the film, some scenes in American Hustle felt improvised, focussing greatly on the characters. I reject any claims that the film was too boring, too long or too complicated. The premise is simple enough. But because of that character focus, it’s the flow of the film that gets affected and it produces an underwhelming ending.

“Did you ever have to find a way to survive and you knew your choices were bad, *but* you had to survive?” – Irving Rosenfeld

At times the three main hustlers became caricatures of the characters they were playing. Christian Bale channels his inner De Niro, trying to maintain control of situations. Amy Adams leaves nothing to the imagination with her sexiness and Dick Van Dykes’ around with an English accent (No, no, no – it’s so bad. You’re not fooling anyone). Bradley Cooper’s character has a perm that could give the Prince of Soul Glo from Coming to America a run for his money. His character is also overzealous, impatient and impulsive.

The issue I have with American Hustle regarding the plot is that we don’t really learn anything about the con artist world – their traits, their tactics or their operations. The only thing the film engages on is the personal drama from Richie, Sydney and Irving. Irving has a complicated life of still being married and dating his new love. Richie fails to acknowledge he has a fiancé yet wants to make a name for himself no matter what the cost and that includes getting close to Sydney. Sydney plays the hustle game with both men (dodgy accent and all) but is at odds with what she wants in life. They can talk about “hustle” and “surviving” etc. but in reality their principles and their ethics count for nothing. They are actually conning and deceiving themselves. We get so caught up in that drama that it deflects your attention away from the actual con and starts testing you on whether you actually care about them.

At best their hustling was more down to sketchy luck than an actual concrete plan. Through insistent behaviour from Richie, they go after Mayor Carmine Polito. Now usually the target is someone who is lowest of the low but Polito is a decent, hardworking politician. Sure he had his connections but morally he was fine. He cared about his family, his friends and most importantly his community. So it begs the question – what was the point of conning him in the first place?

The mafia element is added and Robert De Niro (Victor Tellegio) makes a welcomed cameo appearance to the talented cast. Richie kept on pushing, hoping to create a domino effect of all the corrupt politicians falling into his lap whereas cautious Irving wanted to back away. In all honesty it’s a scenario that never develops past what’s been established. Sure, there was one scene where Victor Tellegio almost caught out their scam when he spoke Arabic but again it further illustrates how frivolous the whole thing was. The mafia connection and introduction disappears and Tellegio himself is never mentioned after that.

In the end who suffered? After Irving builds a good friendship with Carmine Polito, it’s Carmine Polito who gets punished. For what? At least he tried to do good for his community, something that Irving instantly recognised. The consequences don’t add up.

Maybe that was the whole point of the film – to show how stupid the sting operations were and how it failed to make a dent in the pursuit of the mafia. But the way the film handled it felt unbalanced and unstructured. The ending tries to tie everything together but with a lack of cues, how are we supposed to know certain people were in on the con in the first place? With a lack of explanation of their ethics and a narration that stated the obvious, the film robs you of an opportunity to mentally join in the game.

Rosalyn Rosenfeld: “Life is ridiculous. And you know that I would never say anything bad about your father in front of you, but your father is a sick son-of-a bitch.”

As much as I could hate this film, there are reasons why I’m not going completely crazy over this.

The first reason is timing. If I had watched this film during its Oscar run in I think I would have been massively disappointed. I do think the film is a bit overrated but in the quiet comforts of your own home, I don’t think I cared too much about it. A rental price vs. £16-£20 cinema ticket – you do the math!

The second reason is Jennifer Lawrence. Her humour is infectious and was a standout every time she was on screen. If I manically cleaned the house singing to Live and Let Die, I’ll probably look stupid. J-Law does it and it’s hysterical – that and blowing up the microwave. I think she saves this film from being empty because her manic behaviour had genuine (yet stupid) cause. She’s a single mother who was alone and Irving treated her as if she was his dirty little secret. All she ever wanted was to be loved and Irving for whatever reason couldn’t give it to her, comparing her to the “Picasso of passive aggressive karate”.

Further reasons include Jeremy Renner (with Joe Pesci’s hairdo from Casino) and the outstanding Louis C.K. – both actors adding to the drama and became victims of the con (I still want to know the ending to that ice-fishing story!)

When you compare American Hustle to the other Oscar nominated films of the past year, whilst it’s not a terrible film as everyone is making out, but it certainly lacks something that makes it special. I’ve had a greater impact watching films like 12 Years a Slave, The Wolf of Wall Street and even Dallas Buyers Club.

For me, American Hustle was more style over actual substance. It’s fun, entertaining and I enjoyed the absurdity of it all. However I wanted to love it, not like it and in terms of expectations, it may just fall short for some people.