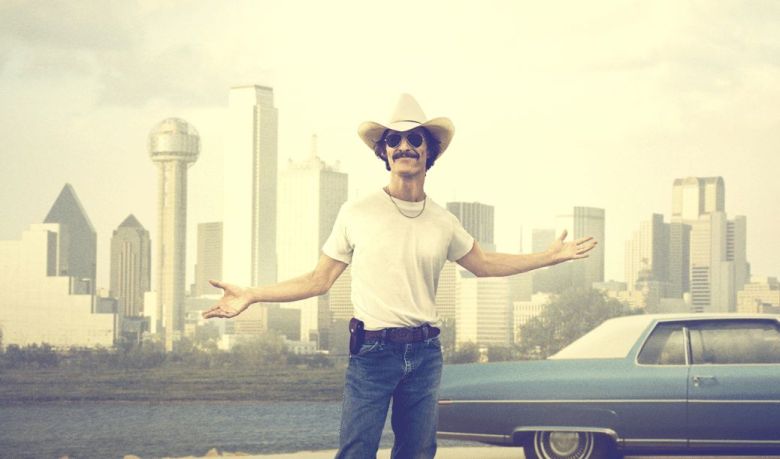 I’ve said this so many times but I’m going to repeat myself.  The 2013 film calendar has got to be the best in years.  As a viewer, we have been spoilt rotten.  During the Oscars (and I’m sure you’ve read in my reviews), my best actor bet was for Chiwetel Ejiofor or Leonardo DiCaprio, who I both felt had acted their socks off.

So when Matthew McConaughey picked up the award, I didn’t have any objections.  McConaughey has always been a decent actor and I’m happy that his fortunes have turned for the better.  When I recently sat down to watch Dallas Buyers Club, I can only re-enforce my belief and say it was deserved.

The story is about Ron Woodroof (Matthew McConaughey) who after a work related accident discovers he is HIV positive.  He is given 30 days to live by his doctors.  Going into full research mode and finding out the AZT medication was ineffective to combat the disease, he travels to Mexico where he finds drugs that could be life-saving not only for himself but also for many others and smuggles them back to Texas.

Welcome to the Dallas Buyers Club.

While I don’t want to sound dismissive about the story, but in terms of plot wise, there is nothing really special about it.  It’s an Oscar friendly film where the narrative is simple and easy to understand.  It follows a journey.  However (and this is a massive however), there are some outstanding performances in this film – outstanding.  Quite simply, this is McConaughey at his absolute best, his best role in years.  I would add Jared Leto as Rayon to the list of outstanding performances.  He also deserved his Oscar award. During the course of the film, this character driven film was an impressive watch.

To say that this film was just about Ron’s battle against HIV/AIDS virus would be a naive thing to say.  The film suggests more than that.  This film was also a battle of perceptions and prejudice attitudes.  As much as the 80s was a decade of flamboyance and excessiveness, it was also a time where it was rough and unkind, especially if you were diagnosed with the virus.  The feeling of a “blame culture” and fear was rife and Dallas Buyers Club does not shy away from those issues.

To suggest that Ron was some kind of saint would be a joke.  He lives fast and plays hard.  He’s a hustler, gambler, a bigot and a drug-taking, sex-crazed man.  But as soon as he was diagnosed, he was fighting on two fronts.  He was automatically labelled as a homosexual because that’s where most of “the blame” was associated.  His so-called friends ditched him at the first sign, calling Ron every derogatory word associated with homosexuality.  They reacted in fear when Ron spits at them during a fight, hoping they didn’t catch the virus.  The FDA accused him of being a “drug dealer” because Ron obtained other sources of medicine even though the FDA knew that the high dosage of AZT wasn’t working.  Maybe I looked at this scene the wrong way, but the way the doctors broke the news to Ron about his disease sounded cold.  Of course Ron took it the wrong way – accused whilst in a state of denial.

It’s no wonder Ron decided to come out fighting.

If Ron Woodroof was the fighter in this film, then the character of Rayon was the heart and soul.  In the battle of perception and prejudice, Rayon was the epitome of that cause.  First and foremost, Jared Leto playing a woman really suited him – and that statement is coming from a woman!  It is a little unnerving at first but you quickly get use to it because of his charming personality, confidence and warmth. He was a Marc Bolan loving transgender who simply wanted to be accepted and live life in the same way.  Rayon’s partnership with Ron seemed like a match made in business heaven because they both challenged each other with those perceptions and decided to face it together.

When I say “heart and soul” of the film – I really do mean it.   The success of the Buyers Club brought attention from the FDA.  When avenues were blocked, to keep the business running, Rayon sold his life insurance because “he wasn’t going to need it” for much longer.  It’s a heart-warming gesture.  Then when he finally succumbed to the disease, I did have a tear in my eye.  When Ron found out, it was like a part of him died and to tell you the truth, so did part of the film. The last 20 minutes felt like desperate times.  The money was running out, the net was closing in and they lost a friend. It was the sudden realisation that they were losing the battle.

Rayon: “This guy says that the Florida Buyers Club is cheaper.”

Ron Woodroof: “Well then, tell him to go back to the FUCKIN’ SUNSHINE STATE!”

Despite the doom and gloom, the strength of the film is its ability to find charm, humour and most importantly, heart.  Rayon was a character that had that in abundance.  Ron shared his humour through his retorts or in one comic scene, making us think he was praying to God for a miracle, when in actual fact he was living it up in a strip club.  For Jennifer Gardner’s character Dr. Eve Saks, she managed to highlight a different perspective as she fought against bureaucratic politics of medical care and the FDA.  At least she cared when it mattered rather than hide behind a rulebook of regulations.

Is Dallas Buyers Club my favourite film of the year?  No.  I still reserve that for 12 Years a Slave.  But the performances of McConaughey and Leto are the reason why they’re Oscar winners.  Not only physically transforming their bodies to embody the life of their characters, but the dignity and heart they brought to the role and the film.  Ron may have started off as a complete dick, but by the end of the film, he started a movement.  Just like the last shot of the film, he took on the disease and the fight for better medication like riding a bull and taking it by the horns.

Dallas Buyers Club is the modern era version of Philadelphia and in terms of the films I’ve seen this year, it’s certainly worthy of a place in my top ten.