I was in a biopic mood the other day.  So who will win in a review fight between 42 and Rush?  Put them gloves on and let’s get ready to rumble!

Jackie Robinson: “You want a player who doesn’t have the guts to fight back?”

Branch Rickey: “No. I want a player who’s got the guts *not* to fight back.”

I have something to admit – even though I love sports and seen my fair share of baseball movies, baseball doesn’t appeal to me.  Sorry everyone.  In the UK, football, rugby, cricket, F1 and probably basketball take the main focus.  The name Jackie Robinson was only familiar to me in name rather than his achievements and why he is so fondly recognised as the best baseball player in the world. 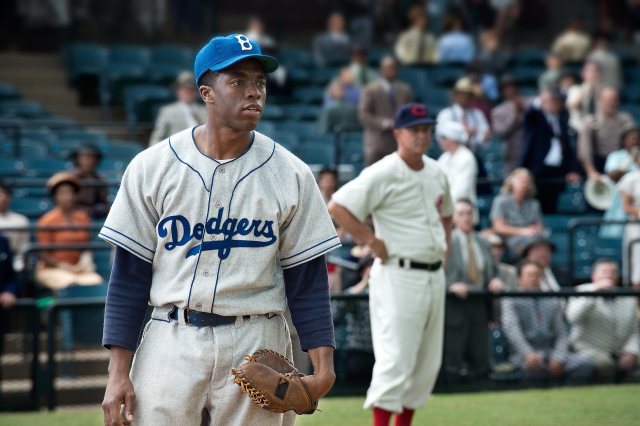 I’ve been hearing positive things about 42 and for a first time viewer learning and gaining knowledge about Mr Robinson, I have to echo and share that same opinion.  42 is a film that can take you by surprise and it’s certainly worth the watch.

Let me address the negatives first before I get onto the huge positives because the negatives are more to do with the structure of the biopic rather than how good the film is.

Without being totally spectacular, 42 is a safe biopic.  It follows chronologically a period of life of the protagonist and shows the highs and the lows of their life.  The main focus of the whole film is about race, highlighting the challenges Jackie Robinson had to face and the ignorance, the fear and the inability to accept change from others around him.  When Jackie Robinson is recruited by Branch Rickey to become the first black player to play in the major leagues, he has to present himself in a positive way, removing the antagonistic anger that would allow judgemental thoughts from others to continue, all because of the colour of his skin.

Whether it’s my post 12 Years a Slave hangover, there is always a degree of feeling very uncomfortable.  Derogatory words should never be accepted. We see Jackie mentally battle his teammates and objective crowds in every game they played.  However Alan Tudyk as Ben Chapman was vile – pure and simple.  He mentally abuses Jackie from the touchline during a game.    After a slow start, it’s this moment where the full weight and gravity of the film starts to show.  You automatically become incredibly sympathetic towards Jackie and whilst Jackie never lost his cool on the pitch (he later takes out his frustration in the stadium tunnel), it took a very brave man not to react in those conditions.

You’re probably wondering where’s the negative?  Well because the film mainly revolves around racism and how others are judgemental about Jackie, Jackie Robinson himself slightly gets left behind.  We don’t see much outside of the race issue with him.  We see him get married, have a child and we witness his continued self-determination without the further developments to help seal it. For a newbie like me maybe I wanted to know a bit more about the man.

In fact, what 42 does is view the issue of race from the outside looking in, as if we were all judging Jackie Robinson.  The characters in the film with their pre-conceived judgements just look stupid and in the end, you’ll be won over by Jackie’s courage and his overall talent and there are many examples of this.  Branch Rickey’s reasoning for signing a black player to the majors is hinted as being financial but the longer the film goes on, the more defensive and supportive he becomes of Jackie until his reasoning behind the whole thing is revealed.  White players who were fearful of going back to their hometown because of the vitriol reaction, majority of them later became sympathetic to what Jackie was going through.  You got one hate mail?  Jackie got hundreds!  Other players who couldn’t accept change and wanted to persist with their narrow mindedness got traded to Pittsburgh, which sort of became an in-joke in the film.

The way it tackles the race issue, Jackie never bowing down to segregation and just wanted to play baseball is the main strength of the film.  It has very good performances from Chadwick Boseman and Harrison Ford. It’s well made, solid and has its hard-hitting moments.  Personally it’s great to see a film about a positive black role model without being portrayed as the typical stereotype of gangsters.

“A wise man can learn more from his enemies than a fool from his friends.” – Niki Lauda (Rush)

Depicting Formula 1 on the big screen has always been a challenge.  I still have painful memories of Stallone in Driven.

If you ever watch a build up to a F1 race, you see a whole number of things – last minute alterations, the crowd anticipating the excitement, the pit crew getting everything into place and a driver that is 100% focused at the task at hand.  I don’t think there are many racing films that seem to capture that essence.

But Rush is the exception and was a complete joy to watch. 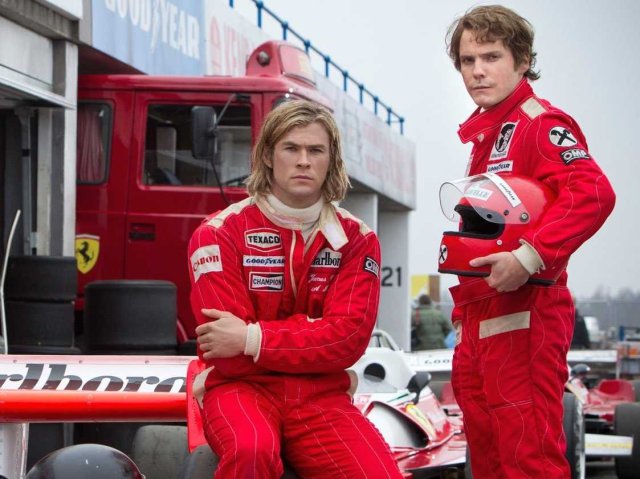 The reason why Rush is so easy on the eyes is because it’s a comparison story between two drivers – Niki Lauda and James Hunt.  If Rush was based on either Lauda or Hunt, it wouldn’t be the same.  Both drivers have a Ying/Yang philosophy with the film offering a perfect balance of their strengths and their weaknesses.  For example:

Because they both share that determination and ambition to be successful, they both come off as very arrogant, which stemmed from their days from Formula 3 where they both got caught up in in a racing incident.  You could probably even say a hint of jealously emerges, always pointing out their weaknesses to each other or trying to antagonise the other.

However in saying that, the characteristics from both Lauda and Hunt changed during the course of the film.  When Hunt was going through his divorce, despite putting on a brave face to the media, he got mad and took that energy onto the racetrack.  He had nothing to lose and essentially became a “better” driver.  For Lauda, he was already driving like he had nothing to lose, always seeking for that gap to overtake.  When he settled down and got married, he suddenly realised that he had something to lose – happiness became his weakness.

The rivalry came to a head when Lauda suffered his accident at Nurbugring in Germany.  The conditions were terrible and strongly felt it wasn’t right to race.  I wasn’t born when Lauda had his accident – I was aware and heard about it.  Seeing it recreated and the horror of the whole thing was shocking.  Lauda was burning alive in his car and I was gasping all the way through.  Director Ron Howard never shies away from the awful tragedy.  He highlights both not only Lauda’s survival and his willingness to live despite the painful procedures he had to go through to recover, but he reminds the audience that Formula 1 is still a dangerous sport where the risks are great.  It takes bravery and courage to get inside a vehicle and drive at 200mph and Lauda’s accident hammers that point in.

For Lauda to return to racing six weeks after his accident is almost unheard of.  It shows what kind of person he was.  People were quick to write him off and his championship dream but he fought through the pain despite being petrified of getting back into his car.  Even Hunt changed after Lauda’s accident – we see him trying to write a letter to Lauda but most importantly when a reporter asks Lauda a bang out of order question about his accident and how his wife reacted to his burnt face, Hunt takes the reporter to one side and beats him up.  There was still a rivalry between the two drivers but after the accident you got a sense that they finally understood each other, acted like professionals and grew up.

Even though Hunt went on to win the championship at the Japanese GP, their attitude remained the same – Lauda bravely withdrew from the Japanese GP but he continued to challenge himself and ended up winning further titles in his F1 career. Hunt didn’t, preferring the celebrity and fame. He only ever won one F1 championship.  In the end that “living life to the fullest” lifestyle caught up to him and Hunt died at the age 45.

The film is outstanding with top draw performances from Chris Hemsworth and Daniel Bruhl.  I knew I was going to love Rush but didn’t realise HOW much I would love it.

Whilst 42 is a good film, Rush goes further.  It manages to show two drivers who were willing to risk it all for glory and the mutual respect they ended up having.