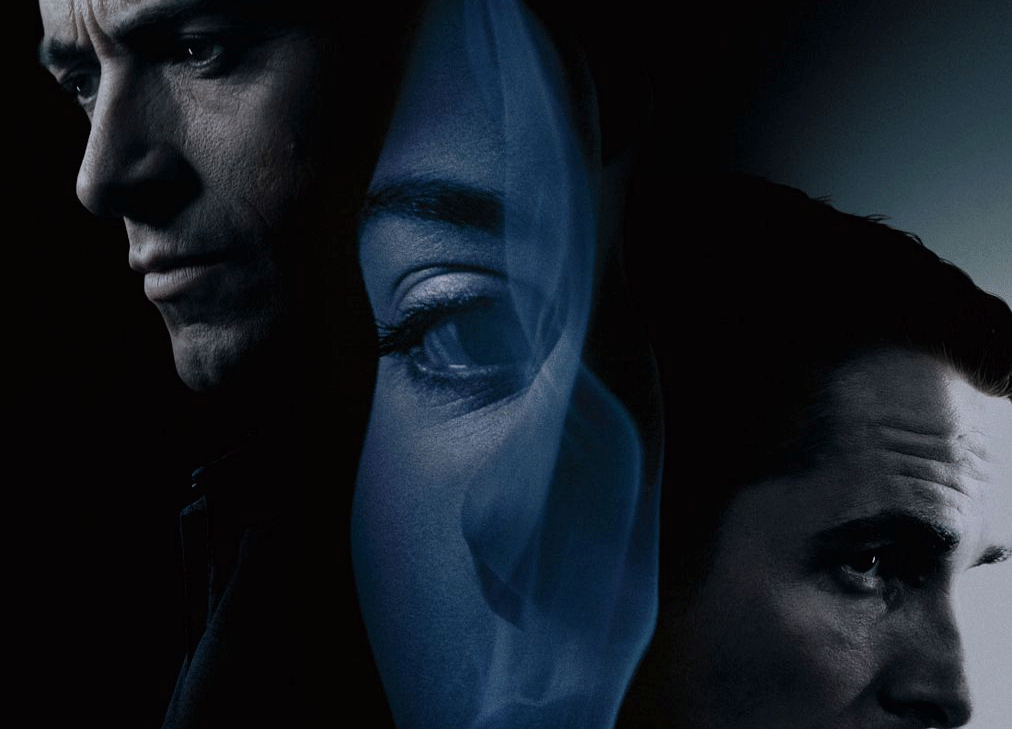 This piece contains spoilers…you have been warned 🙂

I remember the first time I watched The Prestige.  It was the summer of 2007 and popped my disc into my DVD player. For some reason, I had completely forgot about this film and missed out during its initial cinematic release.  To this day, I’m still not sure why.  I remember watching the trailer and felt intrigued about a film about magic but somehow it completely fell off my radar.  There were certainly plenty of distractions.  X-Men 3, Superman Returns (less said, the better), Inside Man, Casino Royale, Snakes on a Plane, Miami Vice and Little Miss Sunshine were enough of an excuse for it to get ‘lost in the crowd’ – well certainly for me.  I was now playing catch-up.  Having enjoyed Nolan’s previous films Memento and Batman Begins (a thankful reboot after the shambolic debacle that was Batman and Robin – less said, the better), I watched in anticipation what he had in store.

And I wasn’t disappointed.

While fans debate (or overreact) over The Dark Knight Rises, it is the subtle complexity of The Prestige that I appreciate the most.  Hand on my heart I would say it’s my favourite Nolan film and in the greater scheme of things, it should be highly regarded by everyone.

To analyze this film can be tricky (pun noted).  Right from the opening scene, you suddenly realize that this is no ordinary, conventional film.  “Are you watching closely?” – the very first lines spoken from the film are not said on a whim.  It is the key.  It commands the audience, like an instructional video to pay attention…otherwise, you will miss the trick.

Casting Michael Caine in his films is an interesting choice by Nolan.  In The Dark Knight Trilogy and Inception, his character is always the moral compass of the film.  He is there to guide, advise and bring clarity on the rules of the game.   In The Prestige, he is no different.  In fact, whether he is playing Alfred Pennyworth, Cutter or Cobb’s father, his characters are the embodiment of the audience.  When we are thinking, “This is crazy!  Hasn’t this gone far enough? Are you waiting for someone to get hurt or killed?” his character echoes that same opinion.  When you compare his motivation to our two main characters – Borden and Angier, and their tit for tat rival tricks, that moral compass that he has are needed more than ever.

Whether it is the means to fight injustice in Gotham, seeking the truth to a murder from the perspective of a riddled mind of a short-term memory sufferer or doing one last job to get home by doing the unthinkable, Nolan has a habit of setting his main characters on a personal quest.  The quests are honorable, even heroic in some cases.  In The Prestige, it is none of those things.  For Angier and Borden, their objective was simple – to create the best magic trick the world has ever seen.  Ambition was their goal.  But in Chris Nolan’s world, ambition is dangerous, especially when you discover what fuels it.

Who was the better magician?  Angier always said it was Borden but that admittance didn’t come until right until the end.  Even in the end, dying and thinking he had won, he couldn’t help himself but quip about his own dangerous secret.  Their means are questionable but there was logic to their madness.  In seeking out the perfect trick, it required true dedication to the art.  You had to live and breathe the work…and even prepare to get your hands dirty.  If it also meant sacrificing friendships and loved ones, Angier and Borden were willing to go the distance, no matter what the cost.  Stealing notes, wild goose chases, broken bones, buried alive, missing fingers – watching The Prestige is like watching an intricate chess game being played.

Borden’s reveal of his secret still gets me every time.  His ultimate trick – he had a double, a twin, sharing the same life, each day taking it in turns to become the same person.  It’s clever.  It’s psychotic.  Schizophrenic even.  To Borden’s own admittance, it wasn’t easy.  When this secret is revealed, everything about how Borden is perceived by others is frightening.  Lines that could have been easily dismissed were now key to unravelling his psyche.  At first glance (and first watch), his constant change of personality could have easily been explained as a famous magician embracing the growing wealth, the fame and fortune in Victorian London.  If this happened in today’s modern world, Borden probably would have won Britain’s Got Talent, had his own reality TV show on some generic sounding channel name and be living it up in Vegas with Copperfield and Siegfried and Roy!  But it is not that simple.  Even though they were playing the same man, like some twisted concept that Sigmund Freund would have salivated over, each twin had their own conscious.

They had different tastes (and women), each one pushing each other to keep creating the illusion. Despite being perfect, their tricks weren’t without risk.  Borden was a risk-taker, using danger (like the bullet catch) as his way to stay ahead of the game.  His secret ultimately became his code of honour, mentally living by that old adage of “living by the sword”.  Their act comes across as the physical embodiment of the human conscious (the sensitive real Borden) battling the sub-conscious (Borden’s aggressive twin).  His stage name was ‘The Professor’ – an apt name for a man who has calculated his whole life, and always kept Angier one-step ahead of him.

“You never understood, why we did this. The audience knows the truth: the world is simple. It’s miserable, solid all the way through. But if you could fool them, even for a second, then you can make them wonder, and then you… then you got to see something really special… you really don’t know?… it was… it was the look on their faces…” – Angier

If Borden’s split personality of the physical kind was bordering on the psychotic, then Angier’s conclusion is where the film’s heart (and real magic) lies.  Angier is a polar opposite from Borden – he’s a showman, charismatic and a wealthy professional.  After his wife’s death at the hands of Borden, he takes on the stage name, “The Great Danton”.  It’s a name he scoffs at for being French! However, it becomes a psychological reminder of why he continued to persist with magic – revenge against Borden.  But as the film delves deeper, Angier’s motivations move from just trying to cope with the memory of his dead wife.  Blind ambition takes over.   He ignores Cutter’s simplistic explanation of Borden’s transported man trick and goes for the fantastical instead.  He stoops down to Borden’s level and learns (with each misdirection) how obsessive he can be.  His newfound dedication to the work left him alone and ultimately losing everything.  By playing dirty, Angier lost his white knight status and became corruptible due to personal circumstances like some pre Harvey Dent in The Dark Knight.

When Angier’s secret is revealed, it brings up an interesting question – when he uses Tesla’s transported man device, how come he didn’t just use his clone as a double and continue the magic like Borden?  The personal ambition of fame and fortune wasn’t enough for Angier.  The memory of his dead wife was long forgotten by this stage of the film.  It was all about the prestige.  It was being able to sell the act, fool the audience and take the plaudits.  He entertained having a double when he was performing the transported man originally but his double, Mr. Root, was a fool, a drunken lout who stole the glory at the end of his trick.  Angier was forced to take his bows from under the stage.  Contrast that to Borden and his natural born twin – both were comfortable sharing the limelight.  When Angier created clones using the machine, to share the stage with another abomination was not an option.  By killing his clones after each performance (ironically in the same way his wife drowned in the water tank), he got what he wanted – spectacle, his moment of glory and a perfect exit to get his revenge on Borden.  And it almost worked.

The possibility that real magic (Tesla’s science) was used to create the ultimate trick is a scary prospect – how many times did Angier use the machine?  Was the last shot in the film the real Angier?  Or did he die before he returned to England?  If he is still alive, is he under a different disguise waiting to punk Borden again?

What I find remarkable still to this day about The Prestige is how well it is crafted. It’s a slow burn, highlighting the constant duality our main characters have to face.  It is that intricacy that makes every twist ending from an M. Night Shyamalan film seem like amateur fluff.  The clues are there throughout the film, and it’s the responsibility of the audience to seek out the truth.  You get to play detective as you dissect the evidence (film noir setting, trench coat, fedora hat, cigarettes and Bogart phrasebook optional).  The answers you find may not be what you are looking for, but it is the way it engages its audience to look beyond the film or to ‘think outside the box’ which is the real winner. The Dark Knight Trilogy was grand, Memento kinda loses its appeal after repeated viewings, Insomnia doesn’t quite come off while Inception was a welcome return to deep thinking sci-fi.  But The Prestige deserves far more.

Without sounding like a Nolanite or Nolan fangirl or whatever term the internet trolls use to abuse each other on social networks or forums, Nolan and his work should be respected.  He is not doing anything new.  He is not reinventing the wheel per se.  But what he is doing, like (Borden and Angier) is dedicating himself to the art, reminding you why going to the cinema can be a magical place.  In many ways, he does come off like a magician.  Like Borden, he likes to keep secrets close to him and only when he is good and ready and fan hysteria reaches absolute panic mode (like when a trailer is released or severe internet outages just booking tickets at the IMAX), he then reveals it.  He stubbornly refuses to use 3D in his films (and rightly so), opting to use IMAX cameras to give his films (certainly of late) an immersive experience.  His films have managed to combine the psyche of a Hitchcock film and blend it well with the visual spectacle of a summer blockbuster.  How often can you say that about a director who has consistently made films to both critically and commercial acclaim?

When I read fan comments about his work (both positive and negative), there is a general feeling like we are spoilt rotten.  He has set a standard of expectation, not only from his films, but in pop culture as well.  Don’t believe me?  Look around you!

Perhaps it’s fair that we as an audience won’t accept rubbish, nonsensical, spoon-fed, pointless cash-grab remakes made on a whim.

Maybe we want something more.

As Cutter points out, maybe, “we want to be fooled” and believe again the notion of cinema magic.

And it’s because of that I eagerly await Christopher Nolan’s next directorial project and it looks like Interstellar will be another thrill ride.