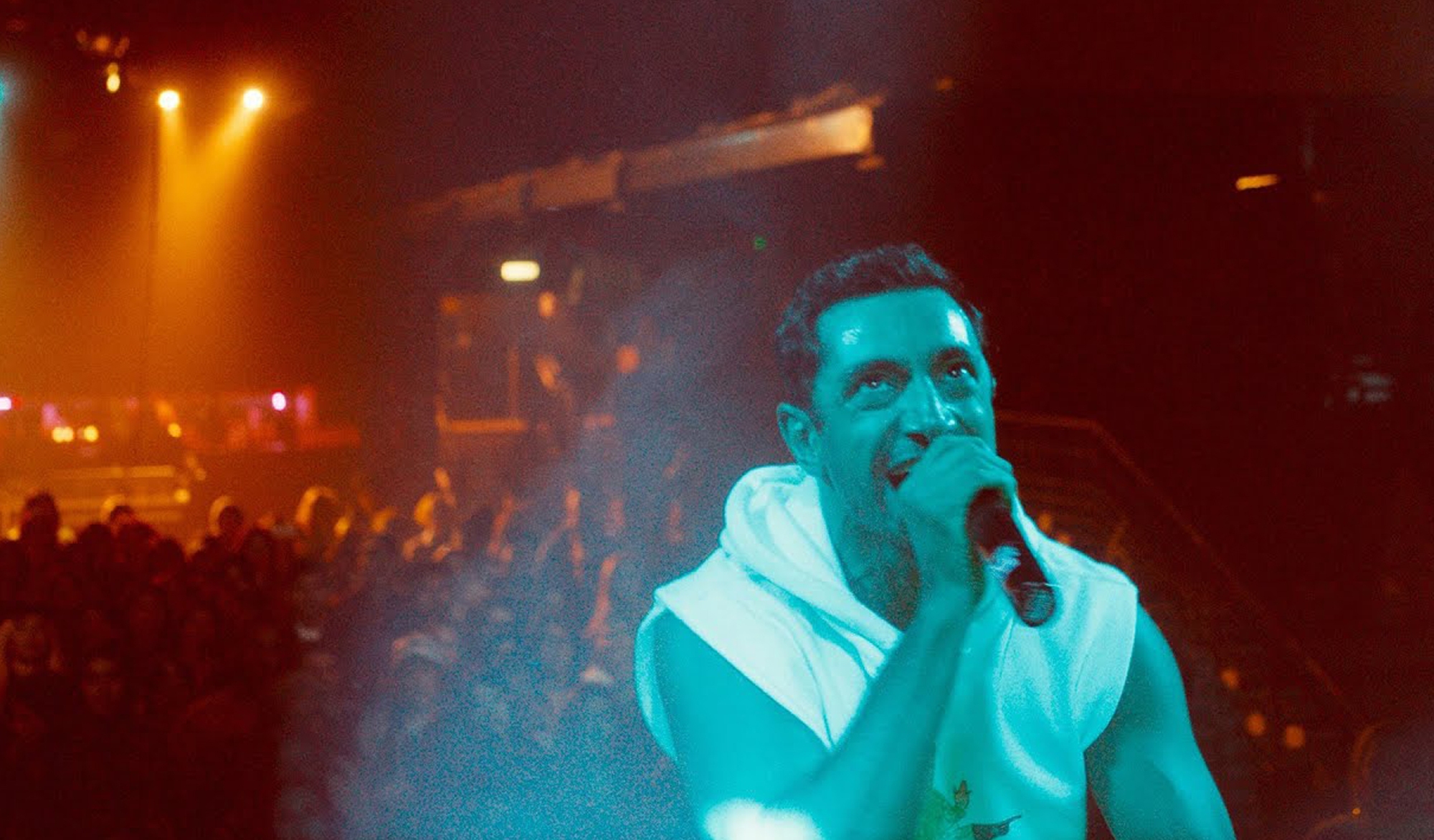 Mogul Mowgli showcases Riz Ahmed in exceptional form with a display that will rank alongside as a career-best.

Mogul Mowgli kicks off spectacularly. You could view it as an intimate confession. Riz Ahmed’s Zed – a British-Pakistani rapper bares his soul into his rap monologue that immediately pulls you into his world. Every lyric glossed in codified rage, littered with cathartic truth, devout passion and fearlessness that swiftly culminates into an explosive release that blazes its audience before the camera pulls back to reveal he’s on stage. If there was ever a significant moment to kick start this year’s London Film Festival – a programme delivery which has been heavily disrupted by the global pandemic – this was it.

There’s a lot to admire from Bassam Tariq’s first feature-length film. Mogul Mowgli is very much ‘for the culture’ – an artful mix of modernity with the unapologetic imprint of traditional Pakistani values woven into its heart. Its guerrilla-style filmmaking stylistically wipes away any trace of that Hollywood sheen, preferring the gritty texture of its locations and authentic reality. Its 4×3 aspect ratio tells us exactly what type of film its audiences are in for – intimate, personal, often claustrophobic with its artistic closeups. This all solidifies Mogul Mowgli for what becomes a fascinating exploration of cultural identity, craft and ambition with Riz Ahmed in his prime.

As Zed, the rapper is on the cusp of a change; his performances are electrifying, his career is taking off and is on the verge of going on his first world tour. That’s until he’s struck down with a life-changing debilitating muscle disease that puts his entire dream in jeopardy. On the surface, it’s a reasonably straightforward premise, but Tariq’s direction manages to take the film in unexpected directions.

You can tell from Ahmed’s performance at how much this film means to him. It’s almost autobiographical – a personal journey with art-house qualities that reflects inward, relishing on its ‘push and pull’ dynamics of generational trauma, history, family, and its diaspora. It’s felt in one particular scene where Zed (short for Zaheer) returns home to reconnect with his family in London, just as they were about to break their fast. They discuss how Zed’s name has been culturally appropriated for suitability for Western audiences, implying he has lost touch with his cultural roots. It’s a fact that he quickly denies, suggesting it is part of who he is as a rapper. But it quickly underpins his character’s story.

It’s a relevant conversation that has come to symbolised what 2020 has become; how representation is reflected and wrestled within society that loves to box and categorise, how it is elevated and educated amongst the masses without relying on outdated tropes to convey a story. But crucially, how the culture advances, moves forward so that others can follow the path. It entertains that question with rival rapper RPG (Nabhaan Rizwan), a complete opposite of Zed where his efforts are more soulless and materialistic as summed up by his song Pussy Fried Chicken. But you could never accuse this film of falling for such instances or trappings without the necessary substance. Every frame that Tariq confidently displays ensures it is intrinsically authentic yet universally normalised through its diverse lens, and that becomes the bedrock for some of the film’s most powerful moments.

How does someone define themselves in a world that treats you differently as an immigrant, where you’re desperate to fit in, but microscopically, the life you lead is filled with endless contradictions, stuck in a ‘No Man’s Land’ of cultures, conflicts and expectations? It’s hard to deny this question when as a critic, you can find so many relatable parallels within its subtext. And in understanding that convention, Tariq uses the opportunity to take his audience through a surreal trip into Zed’s crippling consciousness as he undergoes treatment. The film makes some bold, experimental choices, challenging its audiences to accept its surreal escapades whenever Zed encounters Toba Tek Singh, a spiritual entity with flowers on his face that is born out of chaos and divide. The weaker he gets, the more he succumbs to the triggering emotions and bouts of panicked anxiety.

It’s an exceptional performance by Riz Ahmed. Through rhyme, reason, grit and determined flow, the film falls on his shoulders and rises to the occasion with a flawless display that will rank alongside as a career-best. The amount of emotional vulnerability he manages to showcase is phenomenal. The physical undertaking as his body retreats to a regressive state – a stone throw away from the energetic moves from its blistering opening – will shock. But his rapping monologues reinforce the performance. Inspired by the enclosed environments, being pulled in different directions by his desires, it’s an unfiltered reaction of his feelings, a fear of losing himself that he is desperate to hold onto.

And of course, with every experimental film, there will be notable flaws. Because of its overwhelming focus on its lead, its secondary characters do not get the time to be as fully fleshed and developed as one would expect. They are obstacles that add to the increasing challenges and choices for Zed’s emotional journey. The exception comes in Alyy Khan’s Bashir, a juxtaposition of tradition, disapproval and legacy that serves the ‘old ways of thinking’ versus Zed’s more modernistic point of view. It’s ending – its reconciliation of the soul – feels too rapid and hasty. When a film examines darkness, by the laws of nature, there has to be a balance. We have to see the light. But somehow its payoff never truly feels satisfying in its desperate attempt to wrap things up.

But having said that, this is a story that marries complex elements that cannot be defined by one measurement, and that is a credit to the co-written efforts of Tariq and Ahmed. Fellow artists can relate to the struggles, the personal setbacks, family disapprovals and the chase of ambition. It understands the complexity of being a human being, weighted by those obstacles and Mogul Mowgli encompasses that in a unique way that’s worth watching.