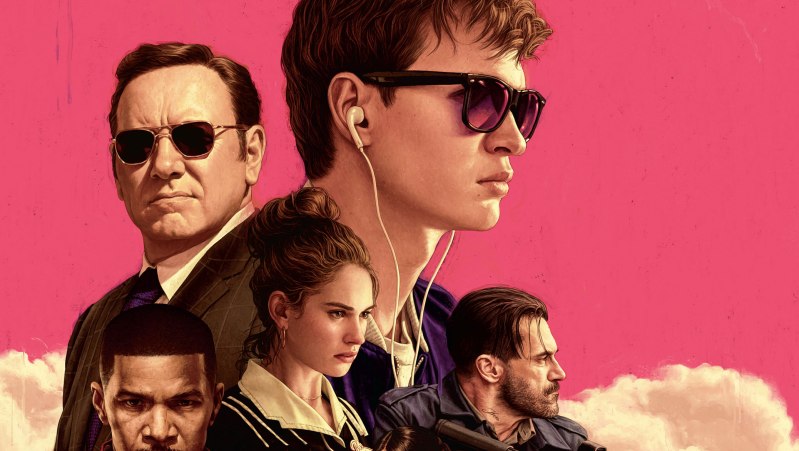 Have you ever felt that songs can perfectly sum up your life?  Well in Edgar Wright’s Baby Driver, it’s the perfectly curated and energetic playlist and film.

Doc: “One more job” and we’re straight. Now I don’t think I need to give you the speech about what would happen if you say no, how I could break your legs and kill everyone you love because you already know that, don’t you?”

If there’s a flaw to be had with Baby Driver then it comes down to one simple thing – characterisation.  On a surface level, characters serve their purpose, superficially living by their bank robbery code like the mechanics of a retro computer game or like the beautiful, “I want that poster on my wall” suggests, a sun-kissed Grand Theft Auto inspired fantasy.  With its simplistic story and dialogue structure, it was never going to stretch the imagination.  Whilst this is not necessarily a negative but tonally Baby Driver represents a slightly more dramatic effort in comparison to Wright’s previous comedic adventures.  Therefore it slightly loses the sharp character building and depth that’s usually on point.  However I always admire directors who are willing to stray away from their comfort zones.

But it’s only a minor flaw because the real beauty and strength of Baby Driver is not the spoken language but in its musical and visual language, a delightful case of ‘show, don’t tell’ approach.

You can tell right from the offset that this is Edgar Wright’s passion project, an idea mulling and cultivating in his mindset until the opportunity came along, turning this fantasy into a reality.  He certainly gave the idea a suitable road test in Mint Royale’s Blue Song, a music video he directed in 2011.  From Spaced to the criminally underrated Scott Pilgrim vs. the World, Wright’s use of music to drive a narrative has been instrumental.  In fact, Baby Driver is probably the heaviest use of music, done in such a way where it’s not just the soundtrack that takes the obvious reference point but where every piece of footage has been intricately designed, deeply thought out and edited to convey how the world itself is music.  Something simple like character movement or dialogue (Baby’s mixtapes for example), tyres screeching or a windshield wiper swaying from side to side are those blended additions that sync with the kinetic soundtrack.  It’s a 180 degree rebellion on how films are usually scored with Wright receiving the spiritual baton from director Quentin Tarantino but done with an obsessive sharpness.  Noel Fielding and the portable CD player has been technologically upgraded and swapped out for Ansel Elgort’s Baby and an iPod Classic.

The humour in Baby Driver is not about the robbery itself – we’ve seen that before in countless films like Triple 9, Heat, The Town, Hell or High Water and Public Enemies to name a few.  They end virtually the same way – get in, grab the money and go.  Wright’s trademark humour and focus is on Baby and his talent, executed with an almost absentminded patience in waiting for the robbery to unfold and doing what most of us would do if we were alone in our cars – rocking out to our favourite song…and don’t pretend you haven’t done that! 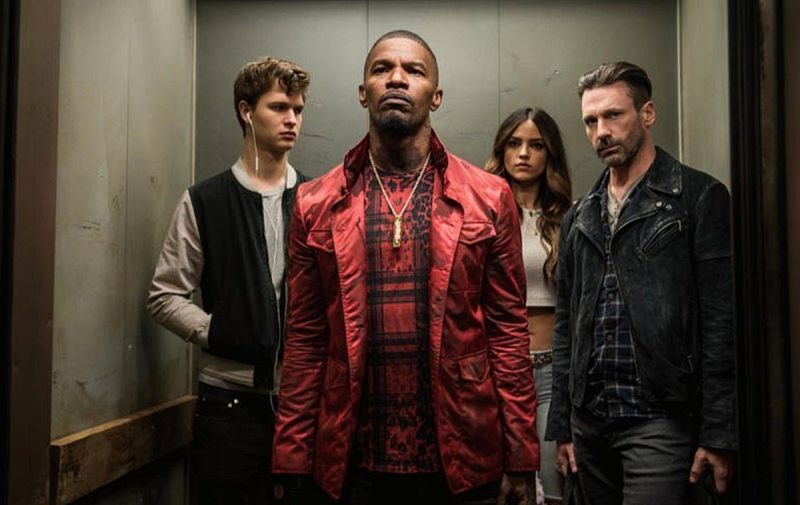 Baby Driver also centres itself on its symmetrical influences, reflecting not only on Edgar Wright’s previous work but films that influenced him.  Whilst not quite as hard-hitting as Nicolas Winding Refn’s Drive or Walter Hill’s The Driver, the stylistic intent is purposely clear.  Baby Driver lives within its own creative universe, a youthful adolescence and innocence summed up by The Little Rascals (young love), Back to the Future (character names) and The Blues Brothers (Elwood’s driving skills) with a little hint of Star Wars flair of Han Solo in terms of style and geek cool.  The way Baby drives cars, getting the crew out of tight situations is reminiscent of Han Solo completing the Kessel Run in under 12 parsecs.  These impressionable influences serve as inspiration that shape Baby’s visual and audio dialogue.  Because of the accident which left him with a hum in his eardrum, not only does music serve as a way to drown it out but provide an insight into his mindset.  It’s a carefree, live in your own playground world where every song featuring the word Baby is about you.  He understands the criminality of his world but so far it’s a life without consequences, moving from one heist job to another in order to fulfil one simple goal – to break free and end a servitude to Doc (Kevin Spacey).  The question the film asks itself is how long can that last before he faces the music?

In fact, the perfect influence to sum up Baby Driver is La La Land but with cars.  Just like La La Land, it’s a bright Technicolor landscape where colours pop against the everyday norm.  While it’s not quite like a musical like the classic Singin’ in the Rain or An American in Paris, the film’s musicality provides an entrance to a dreamscape perception before that harsh reality comes crashing down, summed up perfectly in a quote by Bats (Jamie Foxx) – “The moment you catch feelings is the moment you catch a bullet.”  It’s within that ever-changing youthful adolescence where the circumstances of Baby’s life start to evolve.  Life is not like the simplistic notions found on TV and music is not always upbeat and suddenly the script moves beyond from Baby being a passive protagonist (having decisions dictated to him) to an active protagonist where decisions are taken into his own hands.  When this happens so does the playlist, progressively getting edgier as the stakes are raised.  You see Baby is like a composer and just like how a composer would score a film, so is Baby with the world being his symphonic orchestra.  He’s everywhere, in every fabric of the film print constantly calculating and deciding which song fits a heist narrative but psychologically keeps him in-sync with his world.

But the rewarding thing that Edgar Wright does (which might not get mentioned as much) is using small moments generated within the film to pay homage to silent cinema.  When the film builds upon its escalating themes, Elgort’s physical comedic timing pays off.  Just like how Chaplin perfected The Tramp to be particular and precise with his good-hearted intentions and underdog characteristics, so does Baby.  The sunglasses, the earphones and the jacket are synonymous like Chaplin’s signature baggy trousers, tight coat, hat and moustache.

It’s having a spare iPod when your main one doesn’t hold the track you love.  It’s having spare sunglasses when your current pair is removed through intimidation.  It’s reciting the details of the plan with your earphones on when others think you’re not paying attention.  However annoying these attributes are to other crew members who try to work out who Baby is, wondering if the act is just a gimmick, it also displays the intelligence and one-upmanship that Baby possesses, something that Chaplin displayed in abundance.  When on the road, Baby’s driving naturally does the talking, putting those concerns to bed.  The film’s use of its physical environment continues that silent movie trend.  Similar to John Wick or The Raid, movement and situations are precisely choreographed, moving between cause and effect and back again.  So something mundane as escaping the cops on foot or frantically trying different disguises is like watching an orchestrated dance.

What Baby Driver really represents is that iPod.  Like a tribute to that device and its marketing slogans of the day (“hold everything”, “one size fits all” and “your Top 40,000”), Baby Driver is a film that’s constantly searching for that perfect track like scrubbing through radio stations to summarise an emotion whether its love, vulnerability or that “sh*t just got real” moment. When other films would typically use dull exposition to transition between scenes or set up further plot acts, the song lyrics from Baby’s playlist serve as the main dialogue, musical interludes in between the next major scene and cleverly filling in that missing gap.

This is Edgar Wright’s visual album.

It also epitomizes the generational effect of what music has always done by bringing people together.  Just like in Shaun of the Dead and that infamous record collection scene as zombies approach Shuan and Ed, it’s the sharing and engaging that’s promoted just like how Baby and Debora (Lily James) go through songs that features their name.  Just like any playlist, the themes constantly change which mirrors the film with its dreamscape and soulful first half to its relentless Terminator inspired, rock anthem second half.  Far more effective than how Guardians of the Galaxy uses music, Baby Driver is a film that’s so good it requires repeated viewings just to grasp every intricate detail on how the addictive soundtrack integrates with the film.

Edgar Wright is a director that always has the intent on breaking the cinematic rulebook and Baby Driver is one of those films that’s not often made, but when they are, you’re thankful that it was.