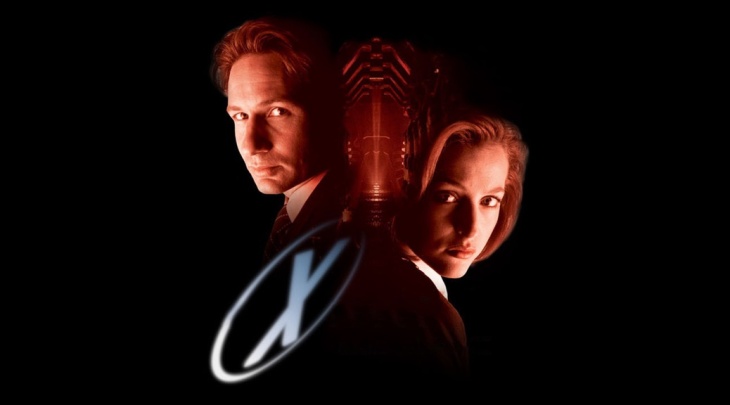 Like every X-Files fan, I’m very excited to see the new series in January 2016.  Whilst avoiding (as much as possible) spoilers about the new series, I’ve been gearing myself up by watching an episode a day as part of the X-Files re-watch event.

To celebrate reaching the halfway mark, today I’m taking a look back at the first X-Files feature film – Fight the Future.

When a terrorist bomb destroys a building in Dallas, Texas, FBI agents Fox Mulder (David Duchovny) and Dana Scully (Gillian Anderson) are drawn into a dangerous conspiracy.  Risking both their lives and careers, the agents hunt down a deadly virus and uncover plans of an alien colonisation that could destroy all life on Earth.

“Whatever happened to playing a hunch, Scully? The element of surprise, random acts of unpredictability? If we fail to anticipate the unforeseen or expect the unexpected in a universe of infinite possibilities, we may find ourselves at the mercy of anyone or anything that cannot be programmed, categorized or easily referenced.” – Fox Mulder

Making the transition between a TV show and feature-length film can be difficult.  Not many have pulled it off successfully, with the exception of Star Trek for example after numerous attempts.  It’s a complex scenario which you can’t take for granted because every show goes through the same problem.  How to do take the intricacy and in-depth characterisations of a TV show and condense it into a solid, meaningful and entertaining two hour movie?

Maybe I’m bias because I’m a fan but The X-Files: Fight the Future not only handles the difficulty well but delivers an enjoyable film that is a proud addition to the show’s legacy.

What makes Fight the Future an enjoyable watch?  Sandwiched between series 5 and 6 of the TV series, the feature film debut at the height of its popularity.  It was the icing on top of the cake, rewarding loyal fans answers to questions long time posed whilst taking the mythology in a chilling and exciting direction.

It’s often said that X-Files episodes were like mini movies, therefore it comes as no surprise to see Chris Carter and co. deliver something cinematic.  Right from the opening shot, the grandeur scale is the first thing that grabs you.  The plot sweeps globally across different continents and locations, making the threat closer to home.  The alien creatures provide the murderous scare and tension.  The action is akin to a Hollywood blockbuster but it’s never over the top or indulgent.  Mark Snow’s brilliant score gives the film the necessary punch for the big screen, combining the signature synths from the show with a full scale orchestra.  It’s an instant wake up call because it immediately takes you out of your comfort zone.  The film’s message is very clear – you’re definitely not in Kansas anymore and you’re not watching your standard 43 minute episode!

While the visual aesthetic has changed due to the larger canvas, the core principles that made the show successful hasn’t.  The film aligns itself in the smart and intelligent bracket, using our central characters in Mulder and Scully to be our voice of reason, our guidance and representatives in exploring the darkness and the enemies within the government.  The intriguing and relevant storyline deals with concepts that are fantastical and out of this world and yet it constructs each element in a grounded affair that is not a stretch on the imagination and believability.  Using bees as an unsuspecting transport method to spread the alien virus, in classic X-Files fashion it once again taps into the paranoid ideals that can make this world a frightening and suspicious place.

Through the characterisation of Kurtzweil (played by Martin Landau), the essence of power and the government’s role is explored.  His work may be discredited, his reputation destroyed by those who know him and yet he conveys a bleak future of “a plague to end all plagues.”  The hopeful notion of government being there for the people with their guidance and protection becomes distrustful and powerless.  The fate of the human race has been played like pieces on a chess board, manipulated by an insidious group of men known as The Syndicate.  They act above authority despite the threats to the project and will not stop until it comes to fruition.

The timetable is set and the world is living on borrowed time…that’s unless Mulder and Scully can stop it.

“I can’t. I won’t. Mulder, I’ll be a doctor, but my work is here with you now. That virus that I was exposed to, it has a cure. You held it in your hand. How many other lives can we save?” – Dana Scully

Key to the success of Fight the Future is the continued exploration of the Mulder and Scully relationship, in which actors Duchovny and Anderson are in top form.

Their relationship reaches an important crossroad.  Their chemistry is undeniable yet their faith is challenged and put under scrutiny.  Scully questions her validity and purpose on The X-Files and takes the moral decision to quit.  Mulder refuses to accept her resignation, fearing she’s quitting when their work together is on the verge of exposing something greater.  His dependency on Scully, a medical doctor and scientist, brings perspective to his wild theories.  If he loses that scepticism, he loses the one person who has ever believed and trusted in him and he’s afraid of facing that journey alone.

If there’s one thing that’s certain about Fight the Future is that it tries to restore balance in their partnership.  Mulder and Scully have always operated with an “us against the world” mantra, believing that they can uncover the government’s involvement in an alien conspiracy.  However they’ve encountered personal losses and battles which has made the journey harder, an aspect which is alluded to in the film but the TV series gives it the necessary context.

Their unspoken love for each other is given proper acknowledgement for the first time.  Mulder’s honest and heartfelt confession on how much he values Scully is enough to melt the heart of any shipper.  It’s too bad a [bleeping] bee got in the way!  I saw the film twice at the cinema back in 98 and everyone in the audience reacted the same – it could only happen to them!  The moment raises further questions about their relationship given the missed opportunity.  Whilst the conspiracy takes a darker turn with Scully infected with the alien virus, it says a lot about Mulder as a character who refuses to accept the bleak and imminent future by travelling all the way to Antarctica to rescue his partner.

When the film delivers its big pay-off, both characters come full circle with a renewed sense of hope.  Mulder (who had been flirting with sceptic beliefs in series 5) finally re-acknowledges the importance of his quest despite the lack of evidence to prove his theories.  The conspiracy carries on without much consequence.  Scully sees the bigger picture (minus the UFO).  Her determination to stay is the realisation of the important role she has to play.  Her science, her integrity and loyalty can help save the world and her partner would be there every step of the way.  They can’t fight the enemy alone but when they are together, at least there’s a fighting chance.

By no means is Fight the Future a perfect film.  There is depth to the story but it’s also fast-paced therefore some story elements (and even certain characters) require further investigation for fans and non fans alike.  The film delivers answers but it poses new questions which you’ll have to watch the series to see how the colonisation plans play out in context.

Could Mulder have held onto the vaccine he gave to Scully to cure the black oil virus?  It would have been further proof to their cause.  Scully’s bee sting attack was very specific!  The patient and well-trained bee somehow survived a trip from Dallas, Texas to Washington D.C. to infect her at a very crucial moment.  The character of Strughold (Armin Mueller-Stahl) is not mentioned again during the series – what has he been up to?  Does he still have the intent to bring about alien colonisation?  Would love to see his character explored again if given the opportunity.

The X-Files: Fight the Future is a fun movie and you’ll have a great time watching it.  Whilst elements were designed to bring on new fans, the experience is better for fans who have knowledge of the show.

The film may have opened up new possibilities to the ever complex mythology, but at least one thing is consistent – Mulder and Scully and the faith they have in each other despite their polar opposite beliefs.

That alone was worth the price of a cinema ticket.