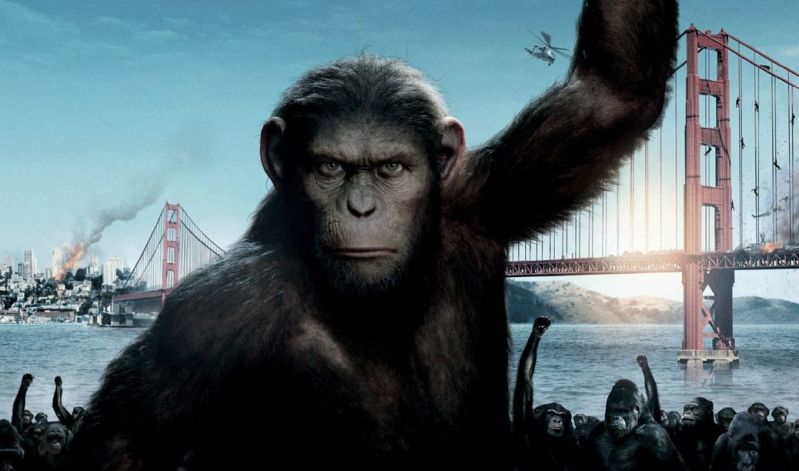 Every now and again, a film comes out and totally surprises you. Rise of the Planet of the Apes is one of those films.

Will Rodman (James Franco) is an ambitious scientist working on a drug formula that could eventually cure the Alzheimer’s disease. His experiments and research has a personal interest as his father, Charles Rodman (John Lithgow) is suffering from the disease. Under growing pressure to make the drug work, Will experiments his drug on an ape called Bright Eyes. Unfortunately for Will, Bright Eyes was pregnant and dies during the childbirth. Will takes the sole responsibility of raising the baby chimp in which his Alzheimer suffering father calls him Caesar. As Caesar (Andy Serkis) grows up, he shows increased levels of cognitive skills and is able to connect with other human beings whilst at the same time questioning his own existence and place in the world. However Caesar’s understanding of the world comes crashing down when he’s imprisoned in a primate shelter, suffering the cruelty from a father and son team who run it. Caesar must battle to save himself and the other primates in the shelter to find freedom with Caesar starting and leading an ape revolution.

I watched this film back in 2011 and was naturally sceptical about this reboot. I’m a fan of the Planet of the Apes franchise but absolutely hated the Tim Burton version. I guess I didn’t want to be broken hearted by another mediocre Planet of the Apes film. It’s not to say the other films were terrible but when you compare them to the original 1968 film, the original comes out on top every single time. 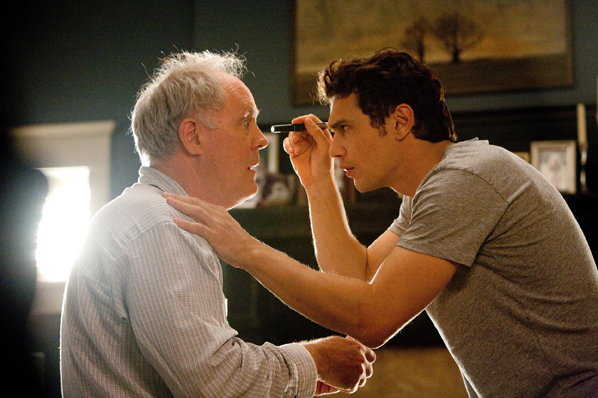 To my surprise, not only was Rise of the Planet of the Apes an outstanding film but it’s also a surprisingly emotional film.

[Caesar and the orangutan Maurice observe John tranquilizes a chimp. Caesar grabs the bars of his cage and shrieks and growls]

When you watch Rise of the Planet of the Apes, its tone and vibe are easily comparable to another film – Project Nim. Caesar is a young chimp and through the natural inheritance of ALZ-112 from his mother, he learns to communicate with Will via sign language. Like any child, Caesar embraces his youth by playing games (like beating Will at chess), drawing, laughing and playing matchmaker between Will and a primatologist called Caroline (Freida Pinto). But most importantly, he establishes a healthy connection with Will’s father, taking care and looking out for him. In the great scheme of things, everything is played out like a “happy family”.

It’s only when Caesar grows up into an adolescent teenager that he starts to wonder about his existence. What happened to his mother? Is he a pet? Why hasn’t he interacted with other chimps? Why does he wear clothes? His frustrations lead to an incident where Charles (sadly deteriorating from Alzheimer’s) is involved in an argument with his next-door neighbour and Caesar leaps to his defence, which ultimately results in Caesar being placed in a primate shelter.

What’s brilliantly conveyed in Rise of the Planet of the Apes is that it’s thoughtful in its execution. Without spelling it out, it always questions the nature of right and wrong. Is it right that we test drugs on primates? Are the intentions of animal testing right if the intention is for the good of the human race or should profit and financial incentive outweigh it? Is it right to raise an animal as a human? Is it right to keep animals in captivity, especially if the conditions are poor and they are treated cruelly? 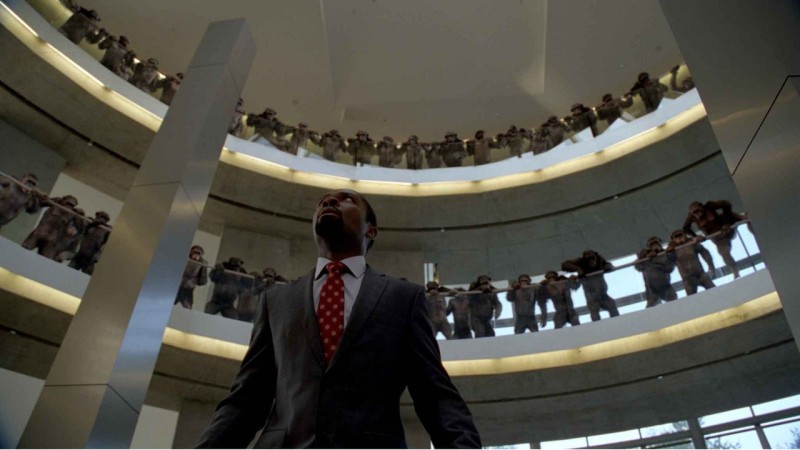 Through Caesar’s emotional journey, those questions come to light thanks to the brilliant performance from Andy Serkis. His performance as Caesar seemed to have come at the right time as if everything he learnt from his past motion capture performances as Gollum from The Lord of the Rings and Kong from King Kong was put into practice for Rise. He’s become such a pioneer for the technology that he changes the way you view CG characters. To give the same level of depth and personality like any other actor would normally do on a film set should not fall on deaf ears. When I say his performance is excellent, I truly mean it.

Through Caesar’s plight we instantly connect with him. Even without the excuse of the ALZ-112 drug, he demonstrates that apes are intelligent like all animals are, something that hasn’t been explored in a Planet of the Apes movie. We’ve always been use to the highly articulate, “Oxford educated” style apes such as Cornelius, Zira and Dr. Zaius. Because of that added incentive, there is a high degree of sympathy, especially when Caesar sympathises with Will’s father and when he helps the other apes to escape their captivity in all forms – from the shelter, the Zoo and the hub of the cruelty, Will’s workplace at Gen-Sys.

The film also explores the nature of family units where Will’s responsibility of Caesar makes him a father figure, watching his “son” grow up and consequently letting him go to experience the world on their own.

“Some things aren’t meant to be changed. You need to accept that.” – Caroline Aranha

In terms of the flow of the story, it’s easily comparable with the original Planet of the Apes film. In the original, the focus is placed on George Taylor (Charlton Heston). Like a fish out of water, him and his space crew land on a “foreign” planet where he discovers that apes are the master race and humans are either put into slavery or experimented on. It’s a great twist on the concept of Darwinism, in which the film ends in dramatic fashion. Taylor at one point is injured, unable to vocally communicate with Cornelius and Zira who befriend him. He relies on writing on paper or any means available to prove his difference from the other captive humans. When put into an impossible situation during his escape, he utters the most famous words in sci-fi history, which brings shock to the entire ape community. Rise of the Planet of the Apes adopts the same notion with the focus switched from a human perspective to an ape. Caesar goes through troubles and communicates via sign language. He befriends an ape in Maurice, another ape who can “talk”. When Caesar is pushed beyond his means and Dodge Landon (Tom Felton) utters the famous Charlton Heston phrase, Caesar replies! He speaks. It’s a significant moment – it pays homage to the original in a big way whilst at the same time, it’s the start of Caesar’s rebellion against the human rule and their treatment.

When the apes escape their torturous captivity, stopping anything that comes their way, it’s an entertaining treat to behold. The switch between having actors dressing up as apes (something that has been a staple feature in the Apes franchise) to having CG/motion captured performances is key to that enjoyment. I was sceptical on whether this change was going to work, given the franchise’s history but it works without you even questioning it. In fact, it brings a lot more complexity with apes and their behaviour that we can easily engage with.

I still hold this film as one of the best films that came out in 2011. In 2014, this film still holds up. It’s an enjoyable, smart, emotionally engaging and entertaining film that is equal to the original and cleverly opens the door for Dawn of the Planet of the Apes where Will’s cure for Alzheimer’s has a terrible consequence for the human race.

Rise delivers the unexpected and long may that continue.