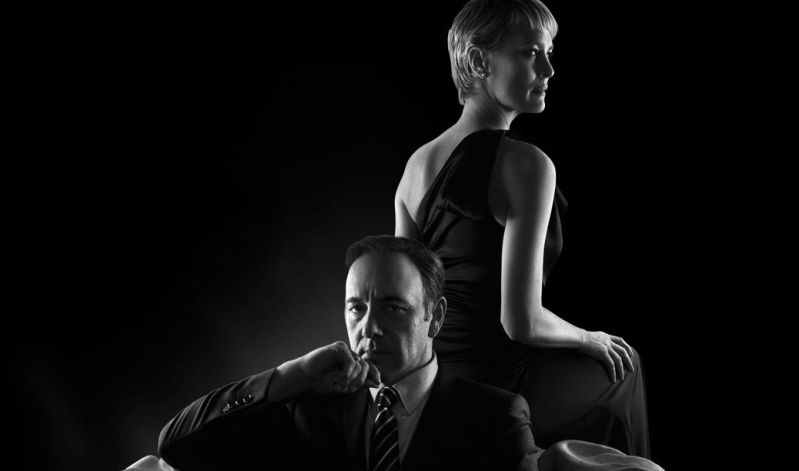 Way-hey! I’m back.  It’s been a while since my last concrete review…so let’s get this show on the road.

So – how to sum up House of Cards S2?  It’s back and it’s better than before.  In fact, it’s outstanding with brilliant performances from Kevin Spacey and Robin Wright and direction from Beau Willimon.

This will be a spoiler free review because I believe in good episodic storytelling without ruining it for everybody!

I have to admit – it’s taken me a while to get this review going.  Trust me, it’s not from a lack of effort or anything, and it’s certainly not writers block!  After the shocking events of episode 1, I did take an enforced break before I continued with the binge watch.  I can only describe my reaction to episode 1 akin to what everyone went through when they watched “The Rains of Castamere” in Game of Thrones (btw – that episode still hurts to this day).

If you’ve read my series 1 review of House of Cards and actually watched it, then the antics in series 2 shouldn’t come as a surprise.  But even then, for someone like me who loves a good twist, this show can still throw you off balance.

Series 2 is darkly disturbing.  There’s no way to get around it and I’m certainly not going to tip toe on hot coals just to dodge the issue.  Without giving the game away, Frank and Claire descend to a whole new level of low, to the point where it’s actually scary and episode 1 sets the tone.

Let me put it in this way – if the event I won’t mention was played out on another series, it would have been dragged out right until episode 22.  Who knows you probably would’ve been bored because you’ll be forced to sit through “filler episodes”.  But that clever writer in Beau Willimon tackles the issue straight away almost as if it was an afterthought. The series leaves nothing to the imagination, often adopting a gung-ho approach.  The plot line doesn’t return to the familiar but in actual fact, it takes a bold new direction.  As the end credits rolled on episode 1, I found myself applauding at how meticulously the episode evolved.  Honestly, it’s probably one of the best 60-minute episodes you will ever see on TV (via a Netflix account!) this year.

As the series veers off into new directions, it’s not afraid to ask the question – how do you fight against two people who are seemingly untouchable?  As you binge watch through the series, the answer starts to fall into place.

Frank is now Vice President, and Claire is his second in command – both waiting in the wings to take over the highest position of power.  They repeatedly scheme and stab in the back people they associate with.  However in series 2, there is a massive difference because their motives and their Machiavellian scheming it’s not without consequences.

In series 1, Frank’s schemes were small fry in many respects.  He could say a one line, an intimidating quip and essentially bully or provoke someone until he got want he wanted.  Claire would act the same way but under her cool demeanour she embodied a sly and deceptive qualities.  In series 2, while they’ve tried to hide their loose ends, none of their schemes seem so cut and dry.  In fact, in some cases they struggle as they deal with the blowback.  For the first time in the series, especially for Frank, we see him slightly vulnerable and not getting his own way.

One of the key reasons for this change is Raymond Tusk, played by Gerald McRaney.  Tusk’s “special relationship” with the President is the major hurdle for Frank and Tusk can sense Frank’s duality and cleverness.  He’s not a fool.  So what happens in the proceeding episodes is a tit-for-tat game of political one-upmanship and it both leads them down a path of trouble.

“There are two kinds of Vice Presidents: doormats or matadors.  Which do you think I intend to be?” – Frank Underwood.

Speaking of trouble, Frank’s and Raymond’s in fighting also starts to affect relationships around them.  The case point regards around Freddy (Reg E. Cathey).  Again I won’t spoil it but Frank’s friendship and loyalty with Freddy does come to a head.  Stamper (Michael Kelly) often regarded as Frank’s lapdog battles against his own demons and questions his own relevance.  Some characters falter, choosing solace or hiding rather than go up against someone as powerful as Frank.  Those who choose to fight back, leads them down a path they can never return.

There is a sense of familiarity in series 2.  The constant issues we see highlighted on the news are reflected on the show.  Issues like hacking, China, energy supply and prices, government scandal and impeachments are all tackled.  It’s how each of those characters respond to those challenges is what makes House of Cards such a compelling watch from start to finish.

The last image of Frank with his intimidating look is both haunting and yet exciting because once more when series 3 rolls around, the show will be veering off into another direction.  February 2015 seems so far away!

I constantly ask myself why Frank and Claire are compelling characters that we love to hate.  Is it because they can get stuff done, cutting through the BS just to make a point?  Claire in series 2 for example is on the same page as her husband, avoiding the distractions she had in series 1.  She uses a personal tragedy to try and get a new law introduced.  Even though it’s a “good thing”, the foundations are based on a half-truth lie.

The truth is I think we enjoy characters that don’t play by the rules.  It doesn’t necessarily mean it’s right but it’s deceptive, dangerous and sly and Frank and Claire will do anything to get what they want, no matter who gets hurt in the process.

Secretly, I think we’re all waiting for that day when Frank and Claire’s scheming blow up in their faces!

And I cannot wait to see what series 3 has in store – whatever that may be.