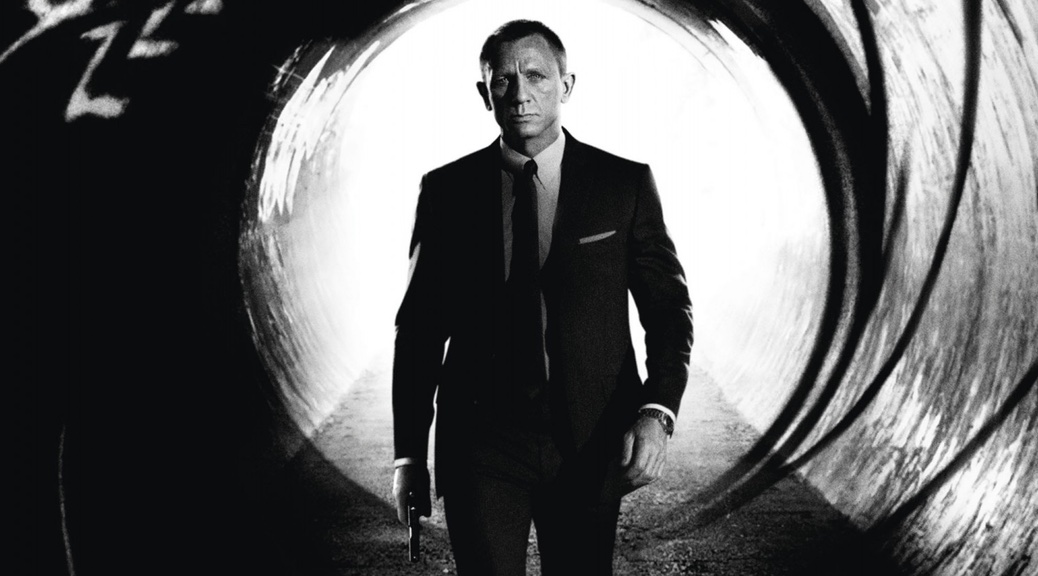 After seeing Skyfall a week late at the BFI IMAX in October 2012 (as I was holidaying in New York), here was my original Facebook post about the film:

“Skyfall in a nutshell – respecting the past and yet ensuring that Bond lasts for another 50yrs. I really dig that. What an amazing film!”

And after watching Skyfall again, I still stand by that statement.

Skyfall without doubt is an amazing film from start to finish.  Unlike Die Another Day which simply destroys the legacy of Bond, Skyfall respects it, builds on it and is ultimately one of the best Bond film ever made. It is not only the biggest Bond film, but also the biggest British film ever.  Words cannot express how happy I am to finally see Bond get his dues and most importantly, respect.

So why is it so good?  It’s simple.  Daniel Craig of course.

If Casino Royale was the genesis of Bond, and Quantum of Solace represents the internal choices for Bond, then in Skyfall, Daniel Craig FINALLY becomes the Bond we know and love (with a few extras).  He looks very much at ease, accepting the pressure and the spotlight of being Bond in the public eye.  He’s humorous and comfortable giving everything he had to make Skyfall the best Bond film to date.  In other words – he’s f*cking brilliant!

Craig also gives us a hidden depth to Bond.  All the lessons he had learnt from the previous films, he acknowledges them and executes them in Skyfall.  He is incredibly loyal to MI6 and his country, a decision he made at the end of Quantum of Solace when he mentally accepts the role of his job and leaves revenge behind.  Bond cares and tries to be sympathetic about the mission and the people he works with as if the memory of Vesper (Casino Royale) lives within him. But most importantly about Bond is that the writers showed his weakness and acknowledges it.  When Bond is shot and then returns to duty three months later, he’s not in the right physical condition and his injuries affect his performance evaluation.  Mallory (Ralph Fiennes) even reminds him that the job is “a young man’s game”, that he didn’t have to put himself through the ordeal of being an agent once more because he already had a clean exit.  This is what Die Another Day should have done instead of breezing past the fact (like a hurricane) that Bond was captured and then walks around as if nothing had happened.   The Skyfall approach is clearly more believable.

The haunting opening credits pose the audience an important question – if Bond had died, and we dissect him, what would we find?  What makes Bond, Bond?  There’s the traditional girls and guns but there are other interesting titbits.  Gravestones, targets, skulls, shadows and Rorschach inspired blots show that Bond’s job is not without consequence.  Death always surrounds it no matter what side you are on.  The opening credits are unique in this case, more than any other Bond opening.  It reveals Bond’s psyche, his make-up. We as the audience are tested on it and have to evaluate it, just like Bond faces these tests during the duration of the film.

I think it is safe to say that M really stands for Mother.  Like all mothers, they are protective of their children.  If we applied this analogy, then Bond would be her favourite “son”. M has no problem with authority, often repeatedly telling Bond off for his reckless behaviour.  She lies for Bond (and to him) about his evaluation performance just so he can get back out in the field where he belongs and trusts him to be.  But overall, what I admire about M throughout this film is her sense of dignity and pride.  Pressured after the debacle over the missing government hard drive, she refuses to go into retirement, opting to quit when the job is done.  When her department is put up to intense scrutiny like a Leveson style inquiry, she defends her agents with passion and shows incredible loyalty to them even though the Government doesn’t show the same care and love that she has.  With the overall theme being goodbye, remembrance, acceptance and moving forward, it seemed fitting that her favourite child, Bond, was there for her in her last moments.  “At least I got something right,” she proudly says.  Bond may have had his differences with M, like for example, calling her a “bitch” during his evaluation, but the way he lovingly holds her shows how much she meant to him.  Since his parent’s death, M for Bond became the mother figure he needed.  She knows the whole story and trusts her on his past to bring her to his family home in Scotland.  So it was no surprise when “mother” was threatened and attacked, he would stop at nothing to protect her.

And if for M, Bond was her favourite son, then Silva (Javier Bardem) was the bastard one!  Silva was the disloyal one.  Silva broke the rules.  And like any mother, if she brought you into this world, she can take you out of it and in the case of Silva and his actions, she sacrificed him. Now he’s the bastard son that wants an apology.  He’s the bastard son who wants acknowledgement and recognition (e.g. getting M to say his real name and not his assigned one).  And he’s the bastard son who wants to his “mother” to end his madness. It makes a big difference from the deluded pipe dream of world domination showcased by majority of Bond villains from the past.

Javier Bardem’s performance is incredible and when I think about it more, it reminds me of another character – The Joker from the Batman films.  It’s no surprise that director, Sam Mendes was heavily influenced by The Dark Knight.  While Bardem’s performance lacks the intensity of Heath Ledger’s Joker from The Dark Knight, it is easy to see the similarities between the two.  The “do you know how I got these scars?” stories the Joker would tell are replaced by Silva’s story about rats and how to change their nature.  The physical scars on the Joker are replaced by Silva’s lack of teeth, complications of a Cyanide death capsule in his tooth that refused to kill him during his capture.  But the most obvious connection between the two is that they both like to play games.  They both like to be one step ahead of their antagonist.  It’s because that feeling gives them power and control.  For example, both characters allowed themselves to be captured so they could fulfil their end game.

Was Silva a 00 agent?  It’s unclear.  He came from the same place as Bond – the shadows, almost like a mirror image of him but with different outcomes/beliefs.  While Bond went on to become mommy’s favourite, Silva became “the rat changing its nature”.  When he was released back into the wild, the loyalty to his “mother” ended.  Now it was replaced by personal revenge.  Life thrills was no obstacle and could do whatever he want.  It was total liberation for Silva because he had a plan. Take over a whole island with the power of words and a mouse click? Done.  Turn Bond gay? Well remember when I said about life thrills being no obstacle? As it was one of the funniest scenes in the movie, I took it for what it was.  In comparison to Bond who had no plan and just wasted his “talent” on booze and women.  Bond drinking a Heineken? His standards have dropped!  Only his “pathetic love of country” prevented him from doing what Silva tried to accomplish.

Bardem’s performance is camp and theatrical. It’s a homage to the Bond villains of the past yet it is also sinister and I loved it.  There’s so much personality in his deception, in contrast to his spaced out, crazy hitman, Anton Chigurh from No Country For Old Men.  Both characters equally scary in their own right and characters you don’t want to mess with.

I could literally go on why Skyfall is brilliant.  Seriously.  I could probably write a book!  I could easily comment on how beautiful the film looks with Roger Deakins excellent cinematography (how come this man hasn’t won an Oscar yet? SCANDALOUS).  How Adele’s song rightly deserved to win the Oscar and every award it was nominated.  Or how the last act of the film was taken straight out of Home Alone!  Seriously, Kevin Macallister would have been so proud 🙂

How do you top a film like Skyfall?  I don’t know.  The possibilities are endless for Bond’s next adventure and I’m very happy that Sam Mendes has decided to return to work on Bond 24.  His efforts on Skyfall should not be swept aside and I’m glad the producers were able to work something out after months of stories of “will he, won’t he”.

As mentioned in my Facebook update, Skyfall respects the past.  There are winks and nods such as the Aston Martin and it’s ejector seat from Goldfinger or the exploding pen reference made by Q (Ben Whishaw) from Goldeneye, but it never deflects attention, opting to gently blend in moments of Bond history rather than the screaming “look over here Bond fan, I’m a clue to the past” approach like Die Another day.   In other words, the story is consistently focused throughout and never loses track from what the story is about.  If Skyfall was the last ever Bond film ever made, it would have ended in the right place with all the pieces of the puzzle fitting nicely together.

Skyfall simply is the perfect ending to Daniel Craig’s character arc of Bond and firmly places Bond right where he belongs – in the nation’s hearts.

I hope you feel the same.

The Countdown So Far:

To the keen observer, you’ve probably worked out which Bond film is left!  Check back next week Wednesday to find out why From Russia with Love is my number one Bond film 🙂

Leave a Reply to The Geek Mind Cancel reply