Alfred Pennyworth: “Were you looking at the old family pictures again?”

Batman: “I have aged phenomenally.”

As Evan Puschak (aka The Nerdwriter) beautifully and eloquently narrates in his video essay The Evolution of Batman’s Gotham City, Batman historian Will Brooker said it best – the defining characteristic of Gotham City must be, there is always crime.

In an opening that is an ode to Christopher Nolan’s The Dark Knight Rises, LEGO Gotham finds itself at the mercy of the criminal rogues gallery.  It’s easy to forget how circular and synonymous Gotham City is with Batman even in a LEGO created world.  The city gave birth to Batman, a catalyst response to the tragic death of Bruce Wayne’s parents.  Obsessively fuelled by the ever-present corruption and escalation of crime, Batman becomes the answer to Gotham’s criminalistic problems.  He is the one who fights crime and Gotham’s dependence on Batman becomes an inseparable bond.

Throughout its 78th year history there’s been different interpretations and re-imaginings of Batman.  But that essence of criminality and Gotham’s inability to tackle it remains the same and is immediately incorporated into The LEGO Batman Movie.  Will Arnett’s sore throat interpretation of the Caped Crusader is deliberately egotistic and self-centred, carrying on from his memorable cameo in The LEGO Movie.  While its far removed from the other versions of Batman we’re familiar with, he naturally carries on that tradition.

When The Joker begins his elaborate and over the top plan to destroy the city, there’s an expectation on Gotham for Batman to be there, hence the nonchalant behaviour from the LEGO pilot when he’s unconvinced The Joker would be successful.  Batman’s arrogance is dialled up to eleven knowing full well on how Gotham is reliant on his services.  Boosting his ego (including a boastful heavy metal rendition about himself and not paying taxes), his reaction and takedown of the villains is celebrated like a massive street party.  Batman is once again a hero. 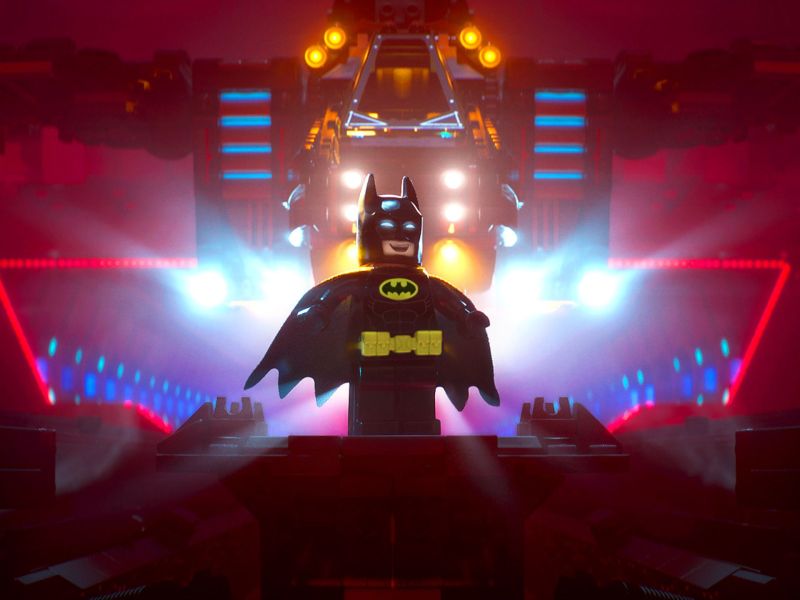 But it wouldn’t be a Batman film without the exploration into Batman’s origin and The LEGO Batman Movie gives it the lightest of touches, in comparison to Batman Begins where it’s central to Bruce Wayne’s transformation into the Dark Knight.  Away from the fame and adulation from the citizens of Gotham, its inclusion is a reflection of Bruce’s loneliness, summed up by watching Jerry Maguire and consuming a lobster dinner for one.  Still haunted by their absence, his attitude becomes a hyper extension to deflect his fear of having a connection, a team, a family.  His life mentor and butler Alfred (Ralph Fiennes) tries to encourage Bruce to look beyond his selfishness and spoilt brat behaviour for something meaningful.  The adoption of Dick Grayson (Michael Cera) is Batman’s first step in responsibility other than his own.

The need for Batman is threatened by the introduction of Barbara Gordon (Rosario Dawson), Gotham’s new Police Commissioner.  Her desire to re-shape Gotham P.D. to tackle crime as a team goes against Batman’s self-obsessed code of conduct.  He prefers to work alone.  In a plotline not too dissimilar to The LEGO Movie, Batman must learn how to put aside his fears (and ego) and collaborate with the master builders to save the city once again.

The Joker: “You wanna play games, do you Batman? Save the city or catch your greatest enemy!”

The Joker: “Who else drives you to one-up them the way I do?”

The Joker: “Superman’s not a bad guy!”

The Joker: “You’re seriously saying that there’s nothing special about us?”

Batman’s story is a driving force in the mythology but that’s not what makes it definitive.  It’s the villains that provide the context and challenging test for Batman to fight.  But the relationship between Batman and the rogues gallery is far more complicated and intertwined.

I’m always reminded of Batman: The Animated Series, where the villains were given a theatrical notoriety but also an empathetic and tragic nature to their character.  For instance, the episode Heart of Ice, one of my favourite episodes made for the series showcases two conflicting sides of Mr. Freeze – his reluctance of turning to crime and the reliance on crime to help cure his terminally ill, cryogenically frozen wife.  Two-Face Part I and II showcases the slow descent into madness of Harvey Dent and the darkness within him when justice, the very thing he fights for as a District Attorney fails him.  It’s this empathetic and emotional connection which evolves the characters from inhabiting simplistic bad guy tropes to something developed and defined.

One of the most fascinating aspects of that villain relationship is the Joker (Zach Galifianakis).  His interaction with Batman highlights a symbolic connection, parodied and exploited in The LEGO Batman Movie.  The Joker is disheartened at Batman’s claim of fighting around, hurt that Batman does not consider him to be his greatest enemy and hatches a new, more ingenious plan to get Batman’s attention. This dynamic is played up for comedic effect, Batman’s stalking and natural distrust of the Clown Prince enables The Joker to look beyond DC’s current arsenal of villains, exploiting LEGO’s merchandising credentials.  But there’s a foundation where that desired necessity comes from.  In Alan Moore’s The Killing Joke, one of the most defining and exceptional graphic novels ever made, Batman and The Joker’s origin story are mirrored.  Just like Batman, The Joker had his “one bad day” which made him the way he is.  This aspect is explored further in The Dark Knight where Ledger’s Joker compares Bale’s Batman to a “freak”.  To destroy or kill the Batman would end the fun because Batman is the only one who understands The Joker’s psychological need for chaos.  “Destined to do this forever,” both examples heavily implies that characteristically they’re both the same but chosen very different motivational paths to express their theatricality.


This lack of acknowledgement drives The LEGO Batman Movie and while Galifianakis takes a while to get use to, Galifianakis incorporates the best of his predecessors in his performance.

The LEGO Batman Movie is successful not only because of its comedic tropes and brick like humour. It’s successful because it understands and values the source material. In a film worthy of its symbolism, Batman is nothing without the villains and vice versa. Gotham City, a living and breathing entity is nothing without crime and vice versa. Otherwise there’s no justification for Batman’s existence, concluding the overarching importance of having the Dark Knight.

How do we know this when applied to The LEGO Batman Movie?  When it came to saving the city, Batman didn’t call upon his Justice League friends who were comically having a party and didn’t invite him.  He called upon the rogues gallery!

Who would have thought a film primarily aimed at the younger generation could carry so much depth and in-jokes?

The LEGO Batman Movie is a fun little movie, a clever and playful mash-up and celebration of the Batman mythology and its history, right from the Prince reference, the obscured DC villains (yes Condiment King really exists!) to the Neal Hefti / Danny Elfman / Hans Zimmer inspired soundtrack recreated perfectly by composer Lorne Balfe.

Does the film suffer in any shape or form?  In some parts yes.  Some jokes don’t transition smoothly as others or are forced, something which The LEGO Movie doesn’t quite suffer from.  Since it also takes part in the same universe as The LEGO Movie, you have to wonder how active that kid’s imagination is!  But those are minor issues and when you have LEGO Bane perfectly parodying Tom Hardy’s voice, how can you not laugh?

So yeah…everything is awesome again!